What a topsy-turvy trip! From dry winter weather at home, to hot summer in Fruita, to wind and dust storms in Moab, to a snowbike ride in Aspen, and finally returning to a pile of fresh snow at home. This post is about our visit to the Fruita (far western Colorado) part of the trip.

We departed in our Sportsmobile which my husband outfitted with three seat belt sockets so that the dogs could ride on the bed while safely constrained in their doggy seatbelts. 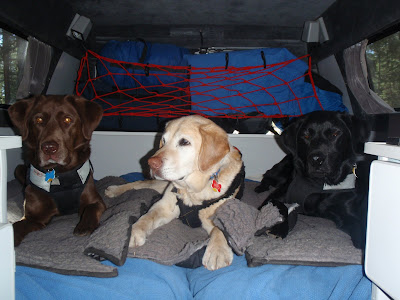 We drove over the snowy Continental Divide to the Fruita area. We camped in Rabbit Valley in a 'campground' that has only one campsite (much the consternation of everyone else while we occupied it). The campsite sat on the protected north side of the conical rock shown below with juniper trees providing even more shade. 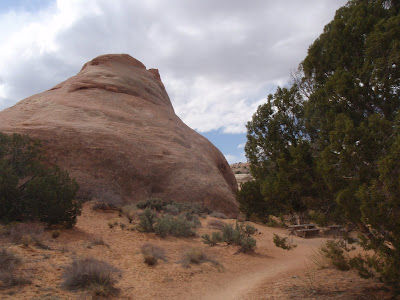 Summer prevailed in Fruita. K and I did short rides together each morning before the searing sun threatened to overheat K. Dogs keep their core body temperature down by panting. They sweat only from their paw pads and their noses - and it's not enough sweat to help much with cooling. Their cooling mechanisms are wimpy by comparison to ours. So, heat that's mild for a human can be lethal for a running dog. To deal with warm days, I try to get out early, and I've trained K to drink from my Camelbak. But, despite keeping her topped off with water, I made sure to get K back to our shady campsite before the sun roasted us.

Below, K panted as we rode along a rim trail overlooking the Colorado River. 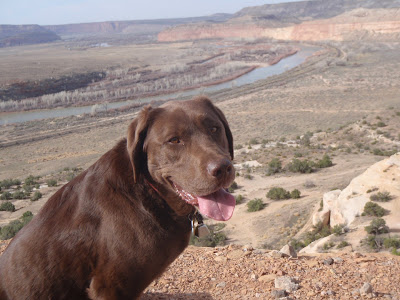 The rim trail bordered sheer cliffs so I kept K in a heel for most of the ride. We were the first travelers of the day, besides a coyote who had trotted along the rim trail, leaving clear tracks in the sand, earlier in the morning. We had complete solitude on this narrow path teetering on the edge of the world until the last vista. Then, we spotted a person 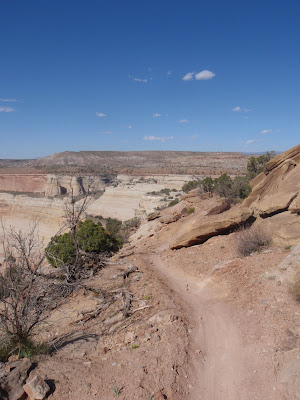 standing on the edge of the cliff hurling rocks into the abyss. I felt lucky that K was mature enough *not* to leap off the cliff to retrieve the rocks - but I held her collar until he stopped because those hard-wired retriever instincts can take possession of a lab's soul in an instant. 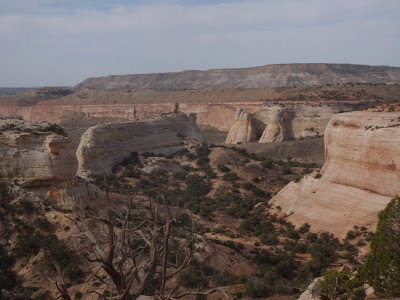 As we rode along the rim of the cliff, I spotted what I'm pretty sure was a prairie falcon sitting on the cliff's edge and his partner swooping in the thermals below him. I was surprised to see a prairie falcon in this environment but a favorite habitat, arid juniper and sagebrush plains, surrounded the river canyons and cliffs. Based on their obsession with the spot, I think that this p 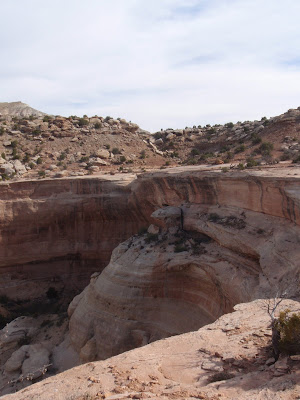 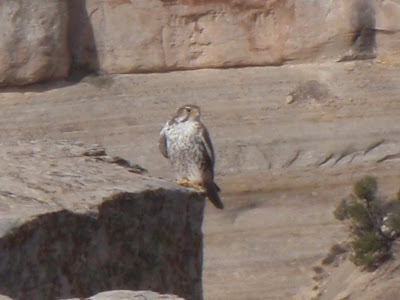 A few flower species bloomed, bring us to a halt to appreciate the splashes of bright yellows and purples splotching the landscape. In addition to the purplish Desert Phlox and the yellow Newberry's Twinpod below, I saw purple milkvetch and red paintbrush in full bloom. 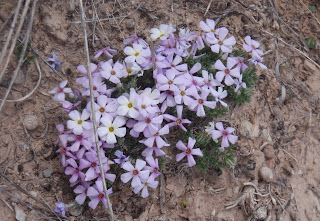 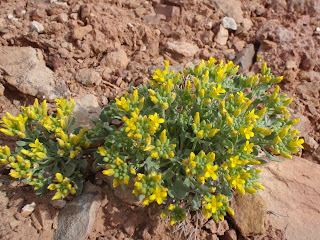 Before heading down to camp, we peeked back for one more view of the incredible landscape. 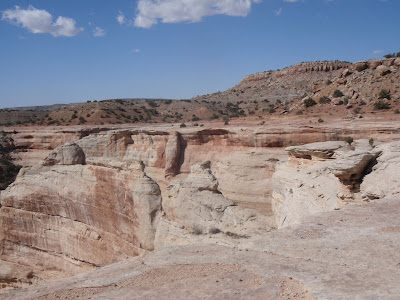 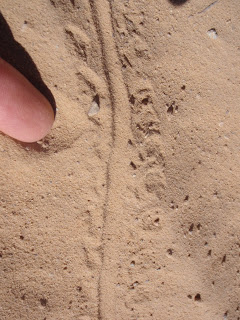 On our way down to camp, we spotted some lizard tracks (left photo - tip of index finger for scale). Small brown lizards (about 4" long including tail) basking in the sun on the trail skittered to hide under plants and rocks as I rolled along the sandy trails.

We also saw kangaroo rat tracks, a desert rodent that hops on its hind legs. Kangaroo rats thrive in the desert with specially adapted kidneys that allow them to live on almost no water. Kangaroo rats are active at night so I saw their tracks early in the morning. In the photo, the hopping tracks parallel my tire tracks. Both lizard and kangaroo rat tracks were an unusual treat for this mountain dweller.

From the highway, the Fruita area looks like a wasteland that I would never consider visiting for fun - and I ignored my friends' advice to visit it for years due to the freeway view. However, away from the concrete and traffic noise, the stark landscape is astonishing. It's a harsh environment with little water (except the river) or shade, and wind storms that whip sand across the plains. However, it's also an area sculpted by the powerful Colorado River, leaving behind a labyrinth of cliffs, canyons, and caverns. It's like a different planet compared to my mountain home. 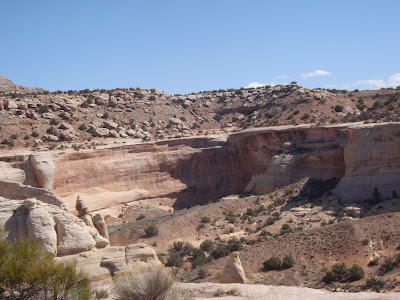