Today's snow bike ride started peacefully, with two tails, brown and black, leading me along the snowpacked trail. The snow sparkled in the sun's rays as we wound through a dense aspen forest under a blue sky with scattered white clouds. 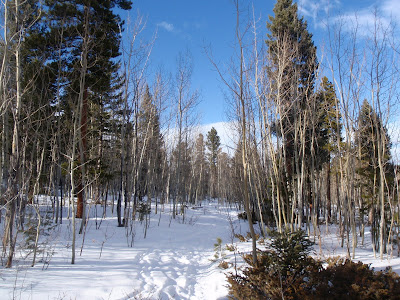 Silence reigned in the forest, but suddenly, both dogs raised their noses to sample a scent. With an alarming intensity, they sprinted uphill toward a pine forest higher on the slope. I called them back, and they both happily complied. 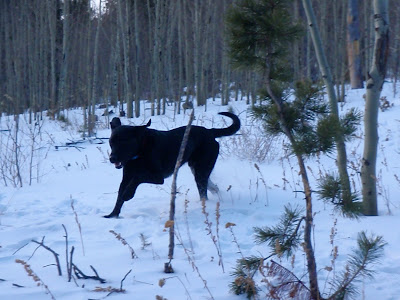 We restarted, and the canines began to run up the hill again. I called, and I believed that I had both of them with me. Alas, it took a minute before I realized that only R was running next to me. I called K and got no response. I called again - the same. I began to panic. K's recall to me is rock-solid. We practice it daily, and she's almost 100% reliable. Consequently, I assumed that her lack of response meant that she was hurt or worse. I released R and started following him up the hill, hoping that he'd show me where K was.
First, we traipsed through an aspen grove, with deep snow and widely scattered small trees. A few pines towered among the aspens. 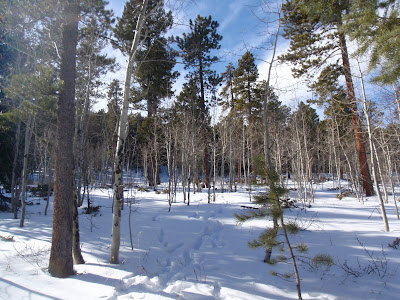 Within 20 yards, the aspen grove started to give away to pine forest. 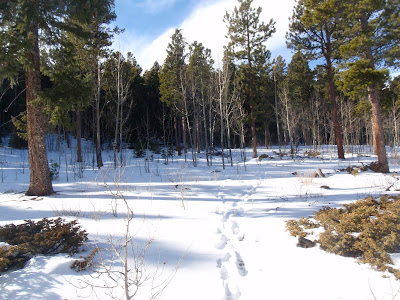 After slogging through knee-deep snow up another 20 yards, R and I entered a dark Lodgepole pine forest. 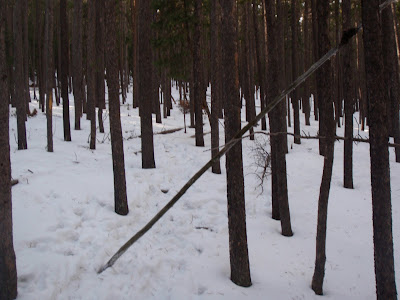 We'd walked about 50 yards uphill from our trail, had crossed another trail, and K still wasn't responding to my calls. I was beyond panic, almost hyperventilating with fear. Then, I spotted her feasting on a carcass. K is not in the photo below but the carcass is visible. It lay about 20 yards above a trail that we used yesterday (so I assume that the animal died last night or early this morning). The body was carefully concealed from the trail with a pile of snow. A closer view showed that it was an adult mule deer, a doe, and the scene screamed violence, with blood and bits of muscle and fur scattered in the snow. The doe was covered in pine needles and snow. 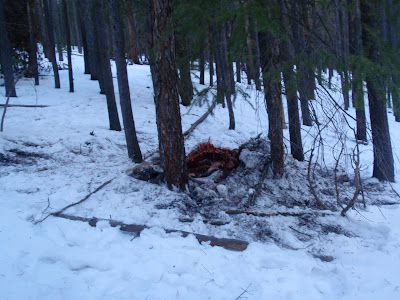 The concealment of the body was an obvious indicator that a mountain lion killed this deer. Moreover, her throat was sliced open, just as lions sometimes do. 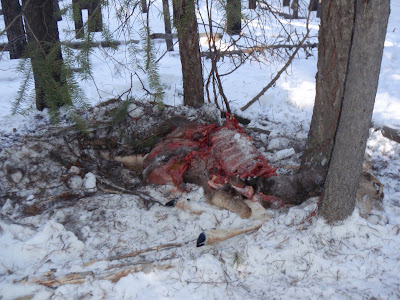 I rapidly started scanning the area, searching for the yellow eyes that I felt certain were trained upon us. I even looked up in the tree canopy for a mountain lion lounging in the branches. But, I saw nothing.
Then, I noticed myriad tracks around the carcass, leaving huge indents in the snow. My chemical handwarmer is in the photo for scale - it's 3.5" long. 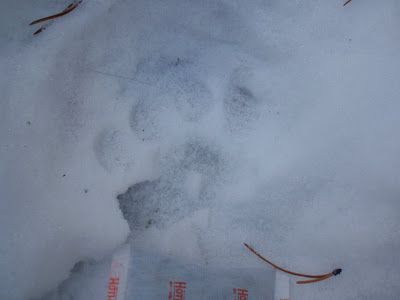 Another pair of tracks, side-by-side, caught my eye. One was huge, like the first track that I'd spotted (shown above) but the other was smaller. I began to wonder if a mother mountain lion and her kitten had both fed on the deer. 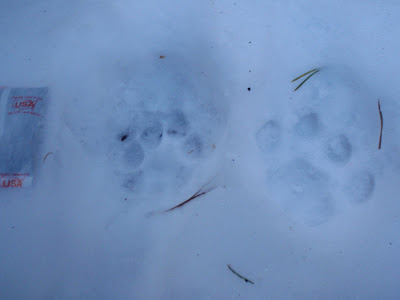 That scenario would explain why K wasn't attacked when she visited the carcass. Mountain lions usually stay close to fresh kills for days, at least, and often vociferously defend them from interlopers. I'm betting that a lion lurked nearby but, perhaps she didn't confront K out of concern for her kitten. That's wild speculation but it explains the unlikely series of events that took place.
After we moved some distance from the scene, K wriggled on her back with happiness. Even when K lay on the ground, the low sun cast long shadows. 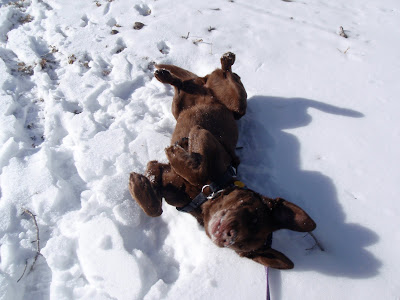 The two dogs beamed. What I'd found to be a scary escapade had been fun for them! 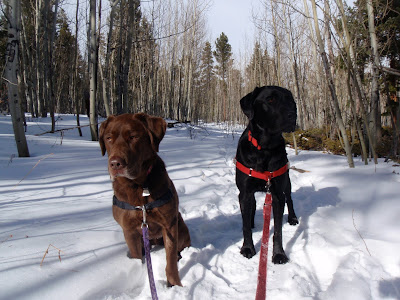 K wasn't so happy when we arrived home. I called the vet, concerned that K eating raw deer meat would set off an acute pancreatitis episode like the one she survived in September. The vet said two words "induce vomiting". So, I did, and K lost her feast. But, she seems happy and hungry now. I'm thankful. 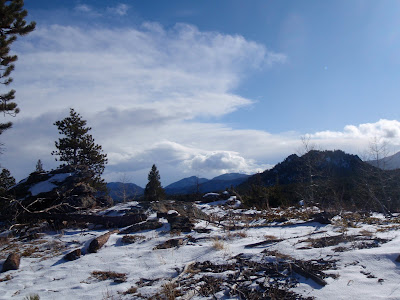 I may have some very interesting wildlife camera photos in the coming days. We strategically placed a camera to get a photo of the lion returning to the carcass. But, for now, I mainly feel very lucky that both dogs seem healthy and unscathed after our almost close encounter with the fiercest predator in our forest.
Posted by KB at 5:19 PM