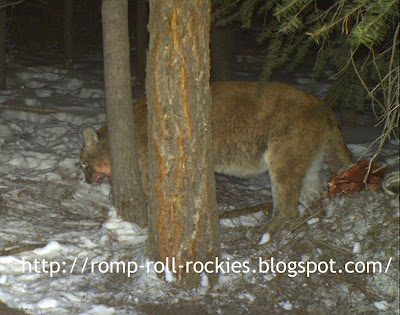 Our mountain lion adventure started on Saturday, January 2, when my labrador, K, discovered a freshly killed deer. A mountain lion had left tracks in the snow surrounding the carcass, which lay mostly exposed.

Wildlife cameras have captured the lion's activity since that time. For the first three days (Sat-Mon), the lion's pattern was that he stayed by the carcass all night and departed for most of the day. Then, on Tuesday, his pattern changed. He stayed all day, vigilantly guarding his feast. Below, I've outlined the details of his behavior, and I've included a video montage of his movements and images.

After killing the deer early Saturday morning, the lion returned to the carcass at dusk on Saturday afternoon and stayed until about 2 AM on Sunday January 3. He spent that night feeding on the carcass and then covering it with snow. He lumbered away, straight up the hill, deeper into the pine forest. He likely planned to make a nearby bed to rest after gorging himself. I'm guessing that he watched closely as my dogs and I discovered the carcass. That's a bit unnerving.

Later Sunday morning, he returned at about 5:45 AM and stayed for an hour. Again, he ate, immersing his entire head in the ribcage, and then covered the deer's body with more snow before departing on exactly the same route as the previous time.

During the day on Sunday, the lion stayed away from his prey for almost twelve hours, before sauntering back to the kill at 5:15 PM on that afternoon. Upon returning, he spent 14 hours at the site, eating, digging snow onto the carcass, and finally departing around dawn. He also spent time lying in the dirt spots that he'd exposed when digging snow. One of his 'beds' is shown next to his snow pile in the photo below. 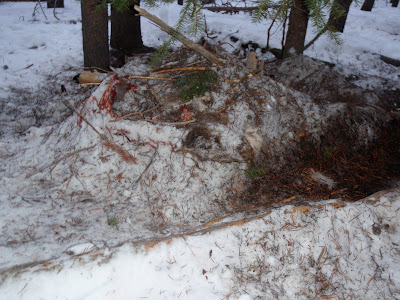 He stayed away, perhaps resting in a day bed nearby, until mid-afternoon on Monday, before returning for a brief snack and some snow digging. Finally, after leaving for a couple of hours, he returned for a long stay at about dusk on Monday. Overnight, until dawn on Tuesday, January 4, he ate and remodeled the snow pile.

Then, contrary to his habit for the previous three days, he did not depart at daylight on Tuesday. Rather, he stayed by the carcass all day. He barely ate. Rather, he spent most of the time resting in the dirt spots created by his snow throwing, prowling around looking alarmed sometimes (probably guarding against scavengers), and remodeling the snow pile protecting his cache. Most of the video is from daytime on Tuesday because the wildlife cameras can shoot video only in daylight.

No scavengers, aside from an occasional raven or magpie when the lion was absent, has dared to visit the carcass. Eventually, when the lion abandons the carcass, I expect to see a parade of smaller carnivores and omnivores, like bobcats, coyotes, corvid birds (crows, ravens, magpies, Jays), and even rodents arrive at the site.

The cameras are still documenting the activity at the prey cache, as I write. My books say that the 'usual' stay at a large prey cache is 2-5 days. However, his intensive guarding and snow pile remodeling yesterday make me wonder if he'll stay longer. Moreover, an extreme cold front with snow has arrived. It'll be very interesting to see what he does next.

In the video below, my good friend from Dream Valley Ranch, has made a montage (with purrfect music) of the best video clips and photos of the almost 300 we have. The video clips are all from January 4 during the cougar's daytime vigil over the carcass. The photos, taken from two cameras, show him over the four nights he's spent at the carcass so far.

Believe me, the videos and photos have made mountain lions (aka, "cougars") much more real to me. K has been spending a lot of time in a 'heel', running right next to my bike on the right side. 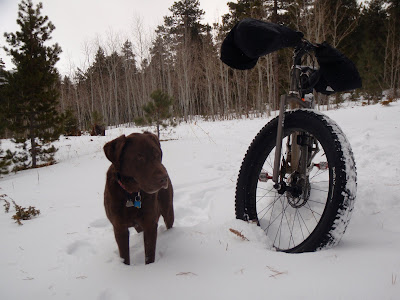 I'm scared to give her much freedom, especially when we are even vaguely close to the carcass. She's much too precious to me. Moreover, we navigate lion-friendly terrain daily, like the rocky-cliff sided trail shown below. 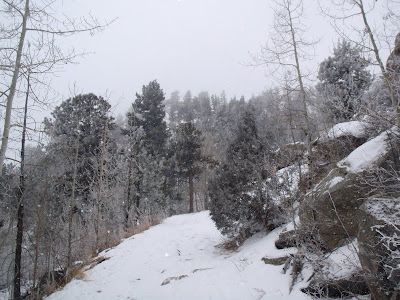