Our Shyla is getting more assertive and confident, much to my delight and surprise. As you might remember, I've been doing "play therapy" with her since early 2018. Almost every day, I play with her for about 10 minutes in the morning and then another 10 minutes in the evening.

Some people think that play changes the hormones coursing through a dog's veins, and thereby also changes how the dog's brain processes experiences. A dog like Shyla who has tended to see perfectly harmless events as very dangerous (like seeing a stranger on a trail) can sometimes be helped by regular play.

For us, there was a big hurdle to get over first. Shyla truly didn't know how to play. She obviously didn't play at all during the critical developmental phase before 12 weeks old. So, I've spent hours and hours teaching her to play. At the start, she'd sometimes just stare into space as I tried to entice her to play. I felt utterly hopeless in that phase.

It's taken time and perseverance... but I can now consistently get Shyla to play with me for those two sessions per day.

And we are seeing signs that it's making a difference. As an example, she calmly met two strangers on the trail today, and she leaned against their legs in a very trusting and content way. I had never seen her do that until recently.

Shyla has clearly become the "Queen water retriever" in our family - and that is undoubtedly partly due to her newfound confidence. She has become a fanatical retriever, and she never lets R beat her to a ball or stick. It's always a little hard to see this changing of the guard within a dog family because we know it's partly R's age that is allowing Shyla to take over. But, at the same time, we are thrilled to see our girl coming into her own.

Here are a few photos from a recent water retrieving session. Shyla is so confident that she often leaps before the ball is thrown... like in this photo. I love how lean and fit she is! 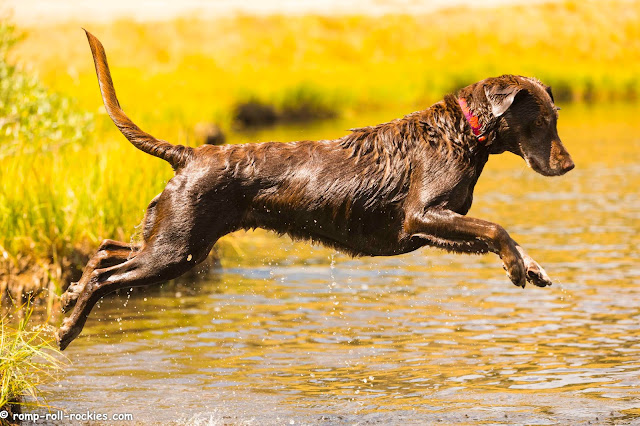 It turned out the ball landed well to her right, and she then tried to turn in mid-air before landing. 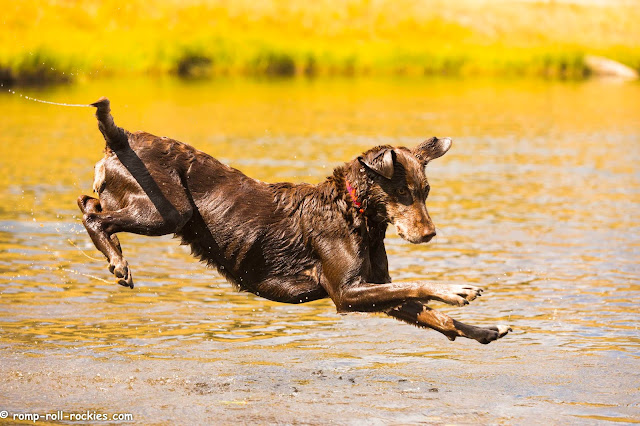 She really only managed to turn her head but she was ready to swim to the ball when she landed. 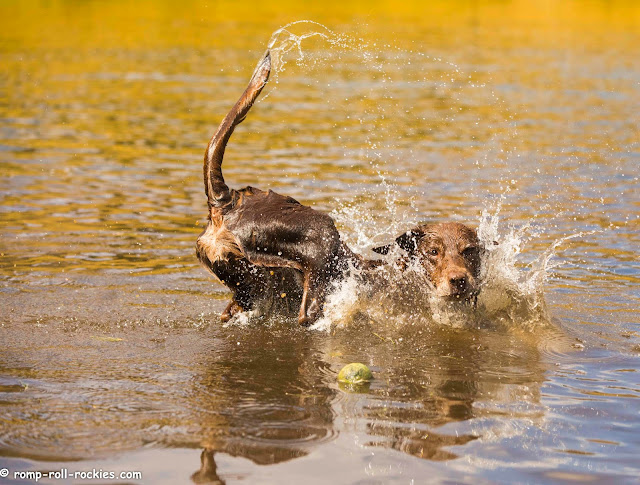 This was another case where Shyla leaped before the ball was thrown. Her brother takes the strategy of waiting to see where it lands before leaping so Shyla ends up a little ahead from the start. R thinks that she should be called for "false starts"! 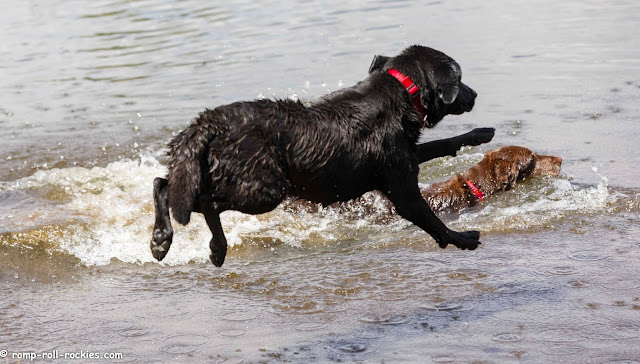 And this is one of those images that I treasure. We know to treasure every day with each group of dogs that we have at a time. For now, that's the Labraduo of Shyla and her big brother R. 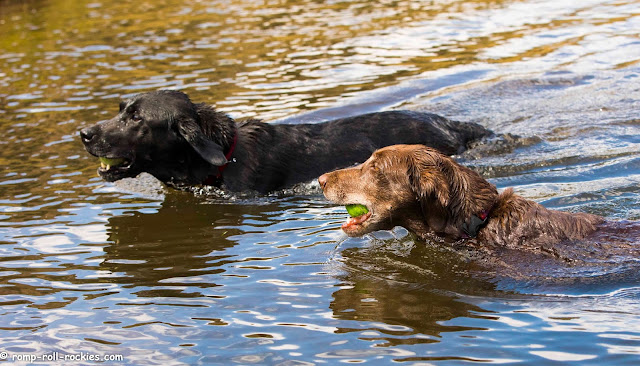 Have any of you tried "play therapy" for fearful dogs? It takes such patience but I do believe that it is helping Shyla. Of course, we've been playing twice a day for more than 6 months now... and we didn't see changes until fairly recently. Thank goodness that play is fun.
Posted by KB at 4:00 AM