You may remember that a mountain lion killed a deer back in June, very close to houses. The lion and two bears ate a lot of the carcass on the first night.
Because the carcass was in a dangerous spot for animals who prefer to avoid humans, I didn't expect either the lion or the bears to return for a second night of eating. I was wrong.
The lion arrived when it was barely dark, and she ate the paltry food left on the carcass. Because most people hadn't gone to bed yet, you'll hear the sound of cars and multiple different dogs barking. It looked as if these sounds made her nervous as she continually stopped eating to look toward the road or toward the multiple nearby houses. I suspect that her anxiousness was why she didn't stay long.
After she left, a lone coyote arrived. He was SUPER nervous. He crept up to the carcass, took one bite, and then departed. I think that he didn't want to meet a lion or bears. I'm sure that he could smell them from the previous night.
Finally, two very talkative bears arrived. The sow was the same one from the first night - "Mohawk". I am not certain whether the male was the same boyfriend as from the previous night or if she'd picked up a new one (sows do that without embarrassment during mating season).
My favorite part of the video is near the end when the sow picked up the carcass and left the camera's view just as the male was approaching. I could imagine her saying "MINE, MINE, MINE". He was a good sport about it and let her have her fill. 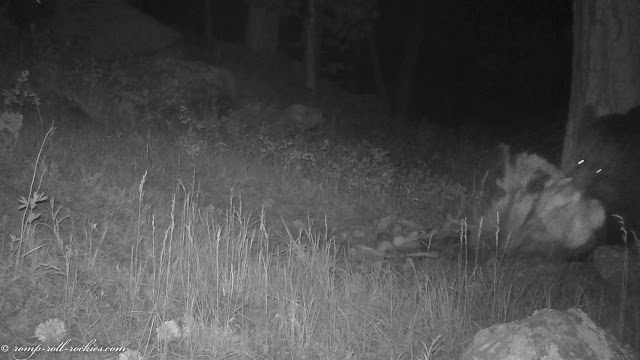 Please remember that our wild animals are trying to make a living on the edges of our human world. They deserve the space to succeed. I was so impressed with the nearby neighbors letting the wildlife devour the carcass with no interference. They kept themselves and their pets safe while staying out of the way. Here's the scene with only one of several homes visible. 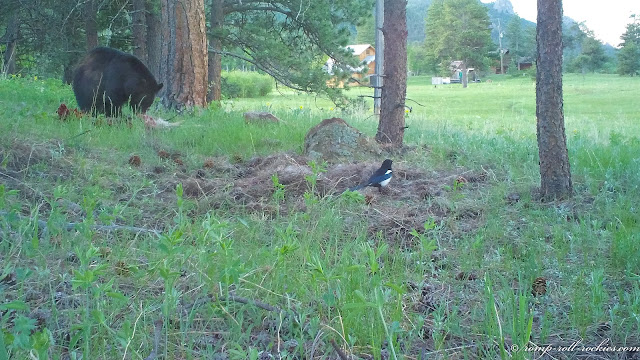