Our Black Dog lived every day of his life with utter joy. As a small puppy, we took him to socialization classes. He would start rejoicing when we got within a few miles of where his class was. His barks and joyful yips were so cute when he was a tiny puppy even in a small space like a car.

At class, he played with abandon. He got along with every puppy in his class, and he was deft at defusing tensions when another puppy got growly. R seemed to believe that there was never ever anything to worry about in life. He'd leap into the pile of other puppies without any hesitation, simply assuming that they were all friendly. I'm sure that our Black Tornado was a little scary to more sensitive puppies but he couldn't be anyone but himself - a wildly happy labrador.

I didn't even own a camera until R was around four years old so I don't have many photos from his youngest years. Somehow, I do have photos of R at his first birthday party. We had to celebrate early because, believe it or not, R had his first elbow surgery on his first birthday (he had congenital elbow dysplasia). So, a week before his birthday, we cooked up steak for the three dogs, served with a candle of course! 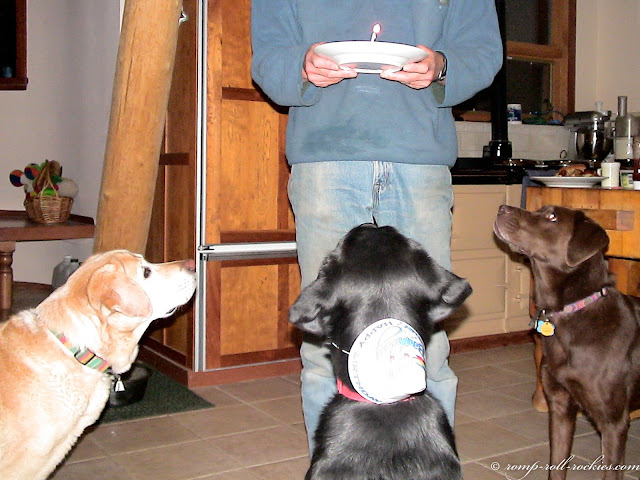 Being the sweet-natured dog that he was, our Black Dog was happy to share his steak with the other dogs, Samson and K.

We miss him but every Sunday is a Happy Black Dog Sunday.