Our Black Dog had a heart that knew no bounds. He had serious surgery on his elbow his first birthday. As a puppy, we'd noticed him limping, and imaging showed that he'd been born with elbow dysplasia.

His breeder offered us a "new puppy" if we returned R to her. We didn't even consider that option for an instant. It was not an option - R was ours and we were his.

During the month leading up to his elbow surgery, he was not allowed to run at all. As an 11 month old puppy, getting no exercise was impossibly hard on R and on us. Finally, when he had not improved at all during his rest, the vet said that it was okay to let him romp in the time leading up to his surgery.

With permission to let him run, we went out the front door, and unhitched his leash. Then, he flabbergasted us when he took a flying leap off of the landing onto the ground that was about 8' down. His flying trajectory reminded me of a dock-diving dog. He landed in the grass and did joyful laps around the house. He was irrepressible.

That surgery did give him some relief from his pain, for at least a year or so. He never hesitated to go out and have a wildly good time even when his elbow was hurting. We knew that we should try to limit his boisterous play to save his elbow for later in life but neither of us had the heart to do it.

Here he was during a break in a happy romp. 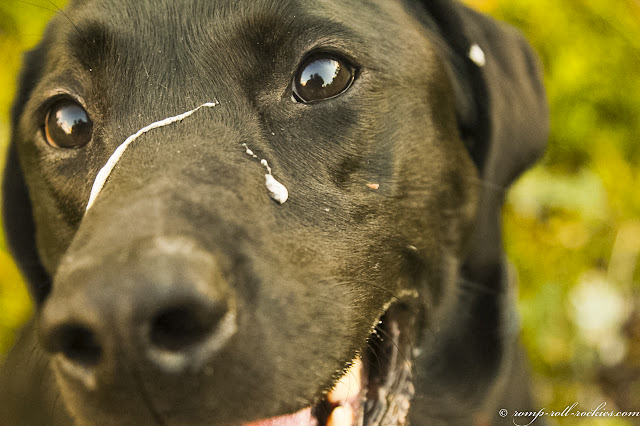 R's happy face appears in my mind's eye every single day. His face had a bit less mischief in it later in life but his purely hopeful and happy eye(s) never changed.

Happy Black Dog Sunday. Just looking at R's face makes me smile, and he would want us all to smile in his memory.