We are really back in our mountains, enjoying a blustery winter day. After a couple of very warm weeks in the desert, true winter is chilling my bones. The good news is that this weather may make it possible to really put out the fires. Snow and cold are in every day's forecast for the foreseeable future which will help the firefighters. The fires were substantially slowed down by snow a couple of weeks ago but they nonetheless kept burning. They didn't gobble up substantial new land due to the heroic efforts of firefighters. And so our new house still stands... 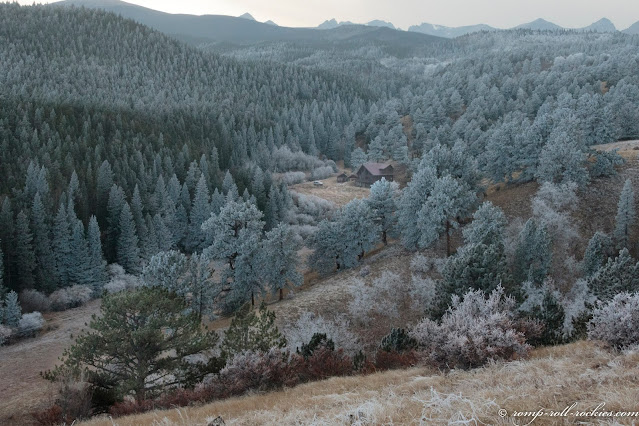 Now that we're back in the mountains, I have wonderful news. Tiny, our biggest black bear, has returned to our neck of the woods and is looking huge. His waistline expanded so much that I wonder what high calorie treats he was eating. He's still limping and marking trees while sitting down rather than standing but I suspect that's now a permanent state of affairs. His injured hind limb is probably not going to heal two years after the injury.

I didn't share it here but I was very worried about him all summer. He disappears every year from June through early autumn. I don't know where he goes, except that it must be a place with lots of food because he always comes back fat. This year, early in the summer, I heard about a bear who was visiting campsites up higher in our local mountains. Our state wildlife agency said that they were shutting down the area to re-educate the bear about plundering campsites. We all assumed that meant that the bear would be hazed so that he'd leave campsites alone in the future.

Within 2 days of the closure, a press release said that they'd shot the bear. As part of the press release, they said that the deceased bear had an old but serious injury to a hind limb and that he was very large (they estimated 200 lbs). I thought that Tiny was substantially bigger than 200 lbs, and so did my friends who have seen him in person, but I worried anyway. So, I was extra happy to catch a glimpse of Tiny on my trail cams in October. I'm glad that the dead bear wasn't Tiny but I still grieve that another bear lost his life due to campers leaving food lying around their campsites.

Check out fat and handsome Tiny in this video. I'll take any reason to celebrate, and this is definitely one!