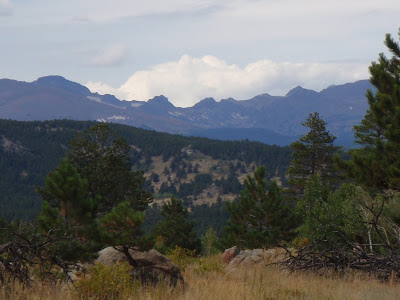 I woke up this morning and shared a good long snuggle with our lovable K. I bet that non-dog people can't imagine this - but I absolutely love how K smells. Probably her sweet scent comes from the pine tar in her fur after many rolls under pine trees. But, I hugged her and sniffed her. I reveled in every little nuance that makes her our sweet K. I also relaxed into the knowledge that she seems to be getting better. She's eating with gusto and trying to convince me to let her run off-leash using cute play bows and other puppy-like antics. What a relief.

Through research, I'm learning about why my vets were so alarmed by her pancreatitis. It kills dogs, and there's strong evidence that it's a chronic condition in K that was exacerbated by eating a few mildly toxic mushrooms. Moreover, dogs with thyroid disorders like K's hard-to-control hypothyroidism have a much rockier road with pancreatitis than normal dogs. That information explains why my vet is taking K's pancreatitis extremely seriously even though some dogs can sail through it with few complications.

In K's case, the episode has left her exhausted. She slept more today than ever before. The most interesting photo of her was of her sleeping. You can see her ribs. She hasn't eaten much in days and won't be able to eat normal quantities for another few days. 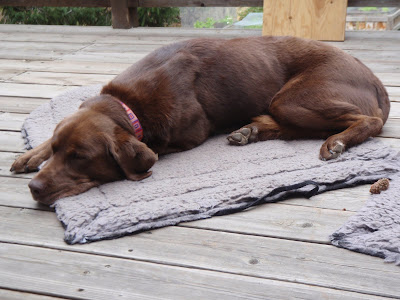 This morning, with K by my side, I looked forward to a nice ordinary day with no frantic drives to vet clinics or anxious hours waiting for news from vets. My great hope was simply a normal day.

A good indicator of how frazzled we've been is that the only other shoe-wearing member of our family (no names!) went to work wearing non-matching shoes yesterday. And, I got a photo! Hopefully, he won't read this post... 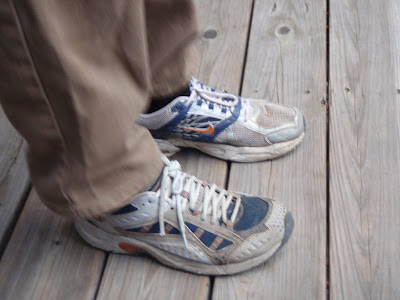 The hope of an ordinary day disappeared during breakfast. My husband and R headed out for a run while I drank coffee on the deck. A very short time later, I heard them returning. I peered over the deck, and I saw a German Short Haired Pointer with them. He'd been curled up into a tight ball hidden under the low boughs of a pine tree in the National Forest behind our house. Our dog, R, found him, circled, nudged my husband, and then stood stock still and pointed at the dog. Yes, I know that Labs are not supposed to point - but pointing at a Pointer seems appropriate to me! Only then did my husband see the exhausted and sore canine. His tags said "Kelso" and listed an address in Denver. 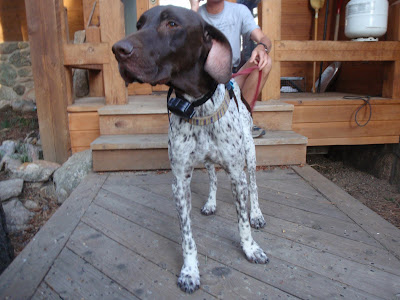 My husband walked Kelso home and phoned the number on the tag. The owner reacted with utter disbelief and elation. He said that Kelso had been missing since Monday, and their hope of finding him had begun to dwindle. But, he asked, "Did you find Molly with Kelso?". He explained that Molly was their other GSP and had been with Kelso when they disappeared. My husband's heart sank. Suddenly, the elation was gone. He hadn't seen Molly.

The family headed straight up to our house but, while they drove, I headed out on my bike with R as my search dog. We circled and recircled the area where Kelso had hidden, calling Molly's name. R's body language screamed that he smelled something of interest in that area (I used to be trained in canine search and rescue so I'm very attuned to a dog's small body language clues). However, I couldn't see Molly, and she didn't answer my calls. 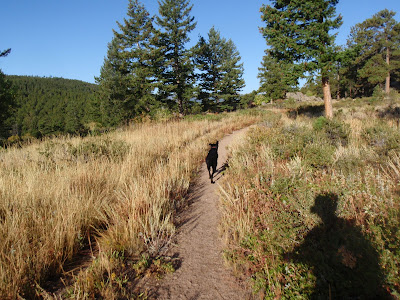 When the family arrived, I led them to where Kelso had been hidden. They called Molly's name a million times while we all tried to use xray vision to pick out a hidden brown and white dog from the forest. Finally, we were on the verge of returning home when a passing jogger mentioned hearing some yipping from a nearby dark gulch. So, as our last try, we hiked down the gulch. My heart accelerated with fear of what we'd find. A couple of years ago, we found the remains of a neighborhood dog killed by a lion in the very same gulch.

As the hiking got rougher and steeper, I suggested that we should turn around. Just as we started to turn, I saw a light-colored animal streak across the trail in front of us. Based on my glimpse, it could have been a coyote or even a lion but it also could have been a dog. We all ran ahead to see around a rocky outcropping, and erupted in excitement when we saw Molly. However, after days on the run, Molly was skittish and looked ready to flee. So everyone but Molly's mom hid behind a boulder while she gently cajoled Molly to come to her. When Molly finally arrived in her arms, everyone cried, even me. What a wonderful feeling! 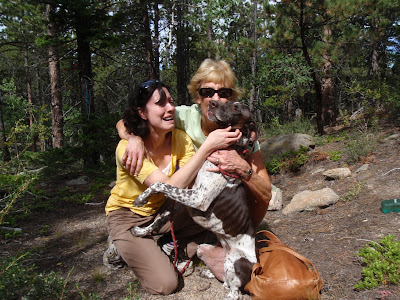 Kelso and Molly went straight to the vet who pronounced them hungry and tired but not hurt or sick. That's amazing given the night-time low temperatures in the 30s and the overnight rains that we've had. So, those two adventurers are at home with their family soaking up a ton of love.

I felt today that I repaid a debt. Earlier this week, I feared for K's life. But, thanks to the dedication of vets and techs, she's mending at home. It felt like perfect symmetry that I helped another person save their dogs today!

What a glorious day! 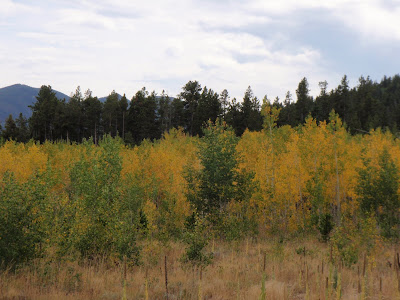