In the great news category, K's fears are evaporating as fast as they appeared. Because she'd twice walked through the agility area with no signs of fear, we spent 2 minutes yesterday afternoon negotiating some obstacles. She breezed through the course with ease and enthusiasm. I didn't push my luck and stopped her while she exuded excitement and confidence. What a difference a week and a medicine change can make!

In the past, her fears of the agility course have endured longer than her other fears. After tweaking her thyroid medications, we'd see some normalcy return to her everyday life but her terror of agility endured for weeks or even months longer. Recently, I started wondering if the reason was that I kept trying to convince her to try her agility obstacles, using treats as incentives, even when she was terrified. By repeatedly letting her 'practice' being afraid of agility, I wondered if the fear became a habit that stayed strong even after her thyroid levels rose toward normal. So, this time, I took a new approach. After her first refusal to do agility, we ignored the agility equipment until she showed signs of recovery in her everyday life. This approach took a lot of self-control for me because I tend to repeatedly confront my own fears to overcome them so I unconsciously impose the same perseverance on K. But, the self-control might have been worth it if it's why she breezed through her agility course yesterday.

Yesterday afternoon, fortunately not while K and I played agility, a coyote passed close to our house. Thanks to our wildlife camera, I know that he visited even though the dogs, who were snoozing on the deck, didn't notice him. He looks young, like a dog puppy when he's growing at an unbelievable rate. The coyote's legs look too long and lanky for his body. Moreover, no savvy mountain coyote would so boldly walk through human and domestic dog territory in the middle of the day. 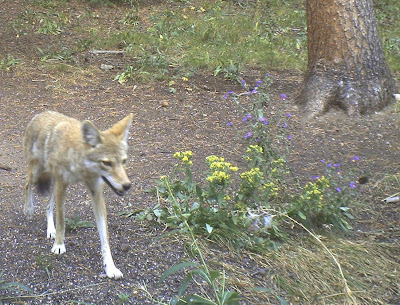 I've read that, at this time of year, the coyote pups start making forays around the territory alone, trying to hunt without grown-up supervision. I wonder if this is a pup who's taking his first solo expeditions. The pups aren't terribly good at hunting by themselves at first so they stay in their parents' territory for help. During this tough rite of passage, the adult pack members regularly call the pups by yipping and howling - and then provide them with food. This meal service becomes less frequent as the winter wears onward toward spring and toward the arrival of a new litter. However, some pups will stay in the territory as yearlings and help raise the new litter.

This information helps me understand why I heard so little howling in the spring and early summer. Our coyote pack's ethereal howls only restarted in late July and early August.

For today, I'd planned a hike up high in the alpine world. However, the smoke had thickened since yesterday and completely hid the mountains. In the photo below, snow fields on high mountains barely glowed through the smoke just above the green aspen trees. 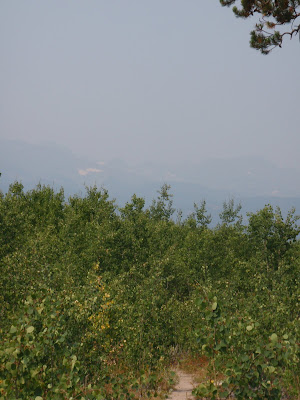 This photo of K is in front of an amazing view of the Divide - not that you could see it today! 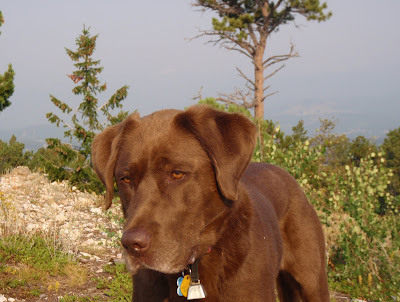 I decided against expending precious hiking miles on a day with no visibility. My spine can endure only limited hiking. Maybe the smoke will clear later this week.

I headed out for a mountain bike ride, after using my asthma inhaler for the first time in weeks. Although the medicine kept my breathing free and easy, my eyes stung and spouted tears whenever I went fast. This smoke from fires to our west is the worst that I've seen in years. The world had a tint like a haunted house that made mundane scenes look eerie. 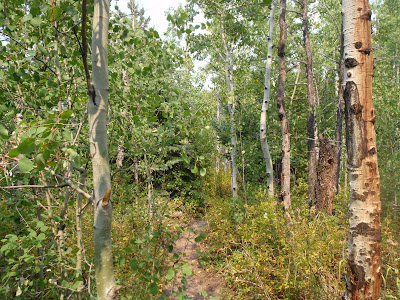 In the midst of a smoke-darkened pine forest, arnica flowers bloomed bright yellow, catching my eye in the murkiness. Tiny flying insects crawled on their pistils, likely doing the work of pollination while drinking nectar. 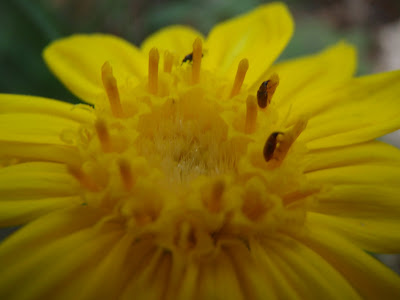 Almost immediately after seeing the lingering summer wildflowers, I gazed at the first congregation of aspens turning yellow. Prior to this, I've seen single trees turning colors but no groups of yellow aspens. 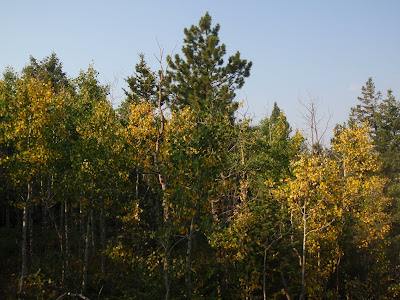 Soon, the riot of yellow, orange, and red aspens will become our world. What an amazing world we live in!
Posted by KB at 3:48 PM