A weight finally lifted from my spirits today. Since I became aware of how rapidly and dangerously my spine is degenerating, each autumn brings worries about how many summers of roaming the forests and mountains I'll have. The future scares me - because exploring the forest and immersing myself in nature is what makes me feel truly alive.

This year's melancholy was triggered by a tingling and numb patch on my calf undoubtedly caused by pressure on a nerve exiting or entering my spinal cord. In a case of bad timing, the odd sensation became too strong to ignore at about the same time as signs of autumn became undeniable. This confluence dragged my spirits downward. The patch of skin is no better yet but history says that it'll probably eventually return to normal. Despite the lack of improvement, the feeling that I'm peering into a dark abyss that represents my future has disappeared.

Because sunrise has crept ever later, the sun rose this morning as I drank my morning coffee on the deck. When I first arrived outside, the sun still hovered below the trees. 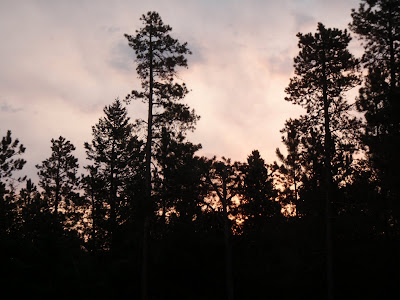 But, it rose above them with a glimmer of brilliance and warmth as I watched. 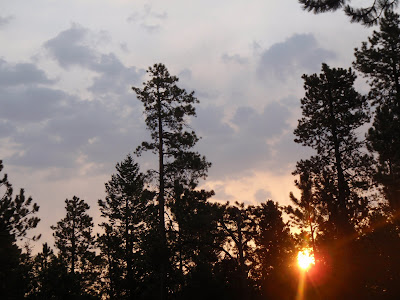 The Broad-tailed hummingbirds who are still visiting our feeder wait for the sun and then they leave their sleeping perches for breakfast. I suspect that these hummers are on rest stop-overs during their southward migration. The last stragglers will probably trickle through our rest stop within a couple of weeks. 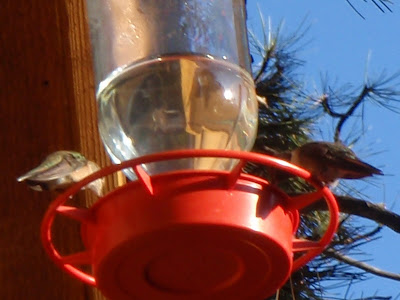 Today, K and I rolled through the forest, and it felt like a peaceful oasis. K romped with vigor, occasionally enthusiastically forging ahead of me but mostly staying by my side. I think that she's feeling better every day. Yesterday evening, she even play-fought with R. Sorry for the photo's blurriness - I'm starting to believe that R's high energy aura causes the air molecules to vibrate around him which, of course, messes up my photos. 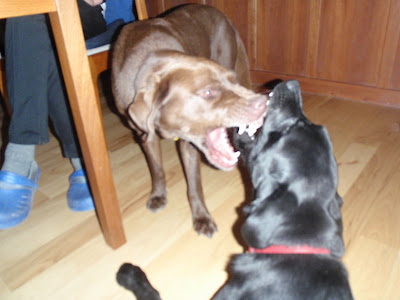 This morning, I smelled smoke as soon as I rolled out the door, and the mountains looked veiled, almost like dusk was falling. I could barely see the Divide from our favorite little peak. 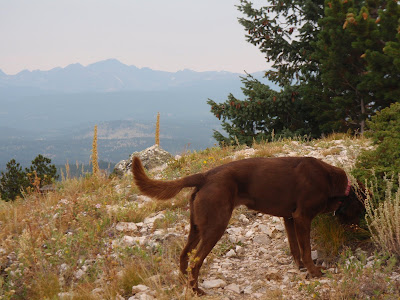 For a brief time, the mountains glowed almost pink but then returned to gray. 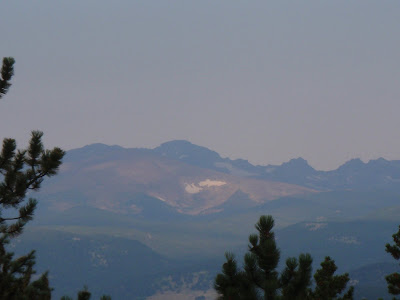 I've read that the smoke is from numerous wildfires in the western U.S., including Colorado, Utah, and California. The forested hills to the southeast looked like photos that I've seen of the Smoky Mountains. 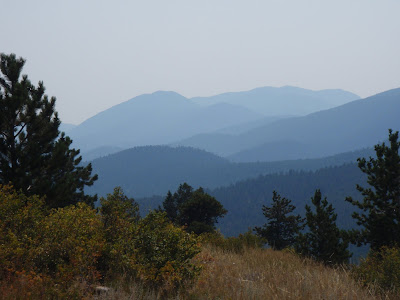 After a relaxing sojourn with K, simply enjoying the silence of the forest while I pedaled and she ran on soft trails, I headed out for a solo ride. I seemed attuned to nature and noticed little details. The goldenrod plant that was speckled with red and black beetles last week still roils with activity. I suspect that the swarm of beetles on it is emitting a plume of pheromones that is calling other beetles to the plant. 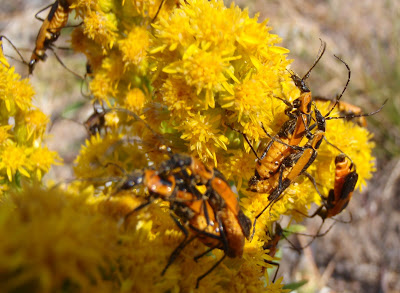 I believe that these are Goldenrod Soldier Beetles (Chauliognathus pensylvanicus) who fly in late summer and early autumn. The adults eat mainly nectar and love goldenrod plants. Since spotting this goldenrod that is like a singles bar for soldier beetles, I've been scanning other goldenrod plants for beetles but have seen none.

As I rolled past a trail intersection, towering yellow flowers swayed in the breeze and the blue sky behind them glowed with promise. 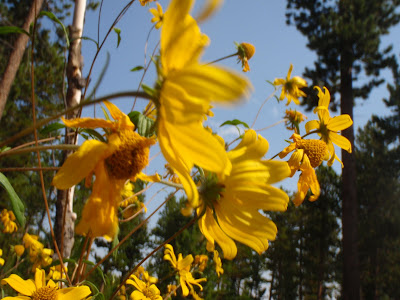 Finally, as I neared home, I silently flowed through the meadow behind my house. Beneath the tall grass, I spotted understated purple gems, Bottle Gentians (Pneumonanthe bigelovii). These clusters of tiny flowers (closed buds are the width of my pinky) are always the last, the absolute last, wildflower to bloom before winter in our meadow. Like all gentians, the blossoms open and close in rapid response to sunlight and shade. In the cluster below, only one flower was open. 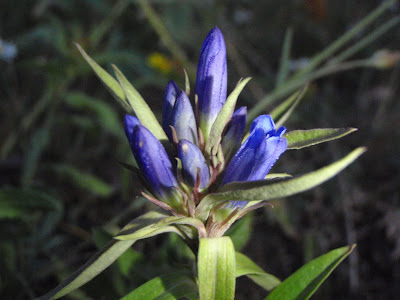 On another plant, several flowers gaped wide open to soak up the sun. The open flowers look like miniatures of the Mountain Gentians that I saw on our recent trip to the San Juan Mountains. 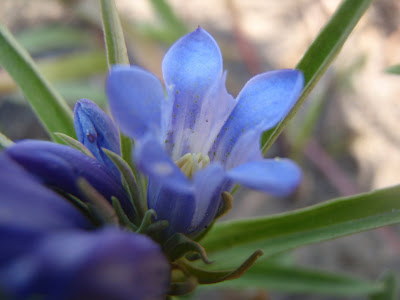 I rolled home, happy and not too tired. Autumn is here, and I think that I'm ready.
Posted by KB at 5:00 PM