Tensions on the trails 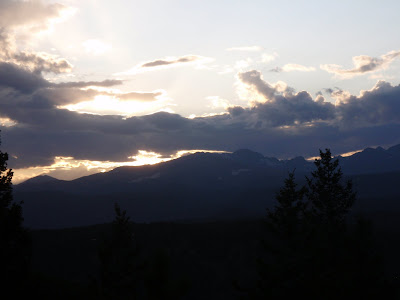 Today, my mountain bike ride wasn't blissful and relaxing. Darker days on my bike are rare - I always think that a day with a bike ride is inevitably better than a day without a ride. My spine certainly agrees with that motto.

Things went awry from the start. While I ate breakfast, to my dismay, my neighbor's dog sprinted onto our property, galloping and happy, as he's done regularly since he was born six years ago. The problem is that he's in danger when he's running loose (he lives a half mile away, across a fast road), and I have a deep-seated inability to ignore a dog in danger. So, I phoned the family who said that they'd be "right over". Well, "right over" seemed to take a very long time for rambunctious R and K who wanted to go for a mountain bike ride "right now".

Finally, with our neighbor dog safely heading home in his SUV, the pups and I rolled out onto the trails. It was much later than usual, and we immediately ran into the 8-strong off-leash pack of dogs and their human who scare R out of his wits. Surprisingly, the usually timid K has reached a truce with them over the years and used her usual strategies of ignoring the small dogs and appeasing the huge shepherds today. As a puppy, R took one look at the pack and turned tail to sprint home. In recent months, his strategy has been to hover under my bike, trying to become invisible. As you see, I'm being literal when I say "under my bike". 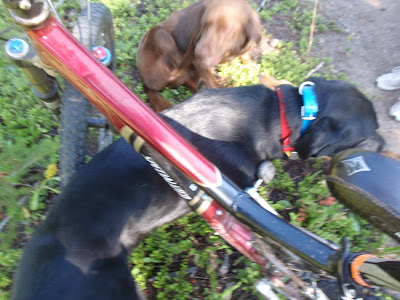 But, the insistent little dogs won't leave him peace so he often gets drawn out of hiding. 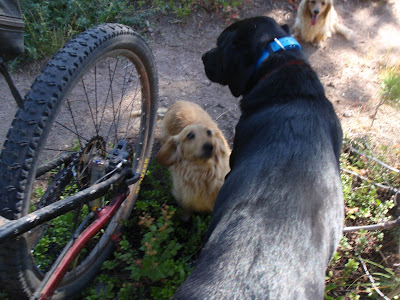 The big dogs act as the enforcers, and if one of the 'Littles' becomes scared, a big dog appears out of nowhere to protect the little one.

We met them one day earlier this week, and R took a new strategy. He snarled and snapped at the little dogs which, of course, attracted the attention of the big dogs and made R even more scared. His defensive behavior isn't too surprising given how they swarm all over him while barking wildly - but it's not a strategy that I want him to espouse.

Today, I stopped at a distance and shouted a request that my neighbor control her rowdiest canines. While she did that, I placed my bike as a barrier for R and had him sit next to me. As they approached and while we humans chatted, I tried to give R treats to make him associate this pack with something, anything, good! At first, he refused the treats but I asked the woman to stay with me while I worked with him because the encounter was, unlike usual, under control. Eventually, he cautiously accepted a treat, and after five minutes, he was taking them with a modicum of enthusiasm. The pack departed without incident, much to my relief. I don't want R 'practicing' aggression as a solution to fear.

Shortly after the pack ran off, R got the 'zoomies' - tucking his rump and streaking in circles. I think that he was releasing his pent-up tension as we rode up to our favorite lookout point. 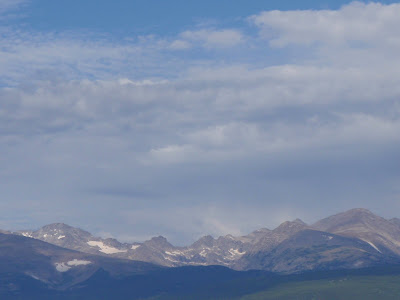 Then, as I rolled along with my pups and tried to chill out, I discovered that someone is attempting to shut down my favorite trail that I've ridden for ten years. I sighed deeply and felt deflated beyond words. Why can't we share the woods in peace?

After I dropped the pups off at home, I pedaled off, trying to reconfigure my planned route given the blockage of my favorite trail. I headed through a heavily used open space and found an abandoned party sight. Garbage was strewn everywhere, and worst of all, a campfire flamed. I couldn't stop the flames by myself, and my cell phone didn't work. So, I headed out to a 4WD road and flagged down some ATVers, asking if they had a working cell phone. Their phones didn't work either but they offered to try to put it out.

I led them through the forest to the fire, and indeed, these guys did a good job of drowning and suffocating the fire. However, as we worked, I became unnerved by their roving and lascivious eyes. I was being checked out and in an open and almost aggressive way. I always carry a large can of pepper spray on my Camelbak hip belt, and I noticed the instant when the most worrisome guy spotted the pepper spray. I was so glad that I had it with me. In the end, the guys politely said goodbye, and that was it. Perhaps I overreacted and saw danger where none lurked. But, something about their mannerisms, despite their caring act of putting out the fire, definitely unnerved me.

Moreover, although the campfire was doused, I had no drinking water for the rest of my ride because I'd used it all to douse the fire. It was not my day.

I always gravitate toward the more remote forest when I feel unsettled because its peacefulness permeates my soul. So, I climbed up a steep and very rarely traveled trail toward a meadow frequented by elk in the winter. Indeed, the meadow and forest threaten to reclaim the trail with each passing year because so few humans visit this quiet spot. I whooshed through golden grass taller than me and entered the forest on an off-camber trail paralleling a gulch and creek. It was tough riding - loose gravel, steep uphill, and a sideways slope tending to make me slide into the creek.

As I focused all my mental and physical energy on staying upright, I noticed a huge gray scat with obvious fur and bone pieces in it. I kept pedaling but reminded myself to be on the lookout for lions. But, to my astonishment, another equally impressive scat appeared on the trail in front of my tires almost immediately. In fact, within 30 yards, I saw four mountain lion scats - and two piles looked quite fresh.

I stopped my bike and scanned the forest that leaned over the trail and threatened to engulf it. I peered down into the gulch, and I thought that it looked like a beautiful moist oasis. I took a photo of the tall yellow cone flowers and a box elder sapling down in the gulch. 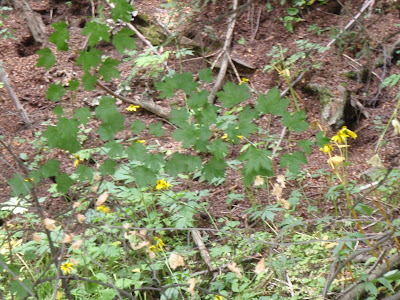 I'd intended to take a photo of the lion scat. But, at just about that instant, I smelled rotting animal flesh, and my mind flashed to the possibility that a mountain lion kill was stashed down in the gulch, very nearby. If I'd been unnerved earlier by the ATVers, the only word for the surge of adrenaline that coursed like hot lava through my veins is 'unhinged'. I started backing away, walking my bike warily for a few minutes while constantly scanning every direction. But, I knew that I wouldn't be able to pick out a lion or even bigfoot from this forest - the foliage was too thick. Finally, I convinced myself that the lion wasn't actually following me, and I remounted my bike. Whew. This ride was definitely not relaxing.

After heading back down to more heavily traveled routes that were eerily devoid of people today, I found a humongous black bear scat - full of berry seeds - in almost exactly the spot where I saw a sow and yearling back in May. I would've enjoyed seeing a bear so I scanned the forests and meadows as I spun uphill with much higher spirits. As I rode, I realized what an oddball I am - black bear scat lifts my spirits! 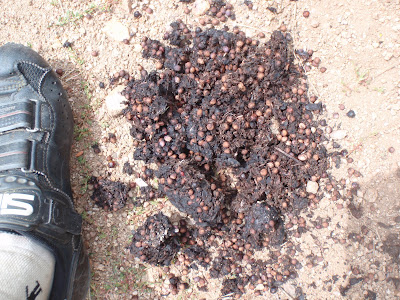 I decided to try a short detour, on trails that I don't know well, on my way home. I rode some sweet pine-needle cushioned trails that I haven't visited in years and started to feel as if my world was returning to an even camber. I even found a new route home - not a bad accomplishment for how many years I've spent roaming these forests.

Then, of course, the sweet and relaxed faces of my Labs met me at home. That never fails to cheer me! 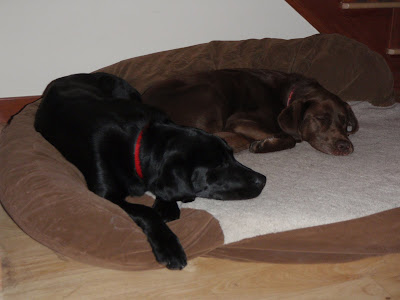