A charmed day on the Monarch Crest

We arrived at our favorite out-of-the-way campsite near Marshall Pass just as the late afternoon thunderstorms burned out. The sun illuminated faraway rocky mountains, creating a magical view from near our campsite. 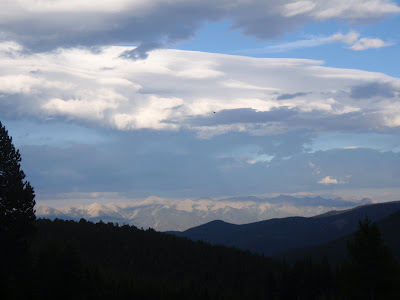 Our campsite perched in a high subalpine meadow with views of soaring mountains around us. The meadow buzzed with life - flowers, birds, deer, elk, and perhaps some hidden predators. 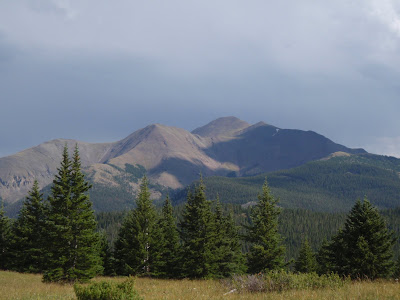 As darkness gradually shrouded the mountains, an owl glided low over our camp for the second night in succession. This particular owl was much smaller than the one we saw at James Peak. After each reconnaissance flight, he perched, his silhouette clearly etched against the sky, in a prominent spot. Shortly after he departed for the final time in the failing light, the dogs went into snarling protection mode, and we spotted green glowing eyes on the meadow's fringe. We weren't sure who was spying on us but someone was! 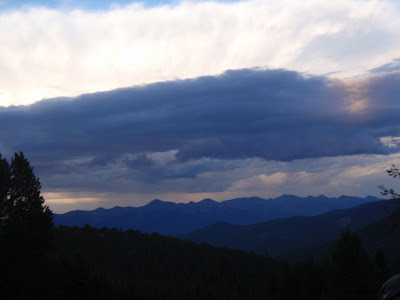 Sunlight beckoned us out of our sleeping bags the next morning. I love campsites that glow in the morning sun and the dogs do too! They both relaxed while we ate breakfast. 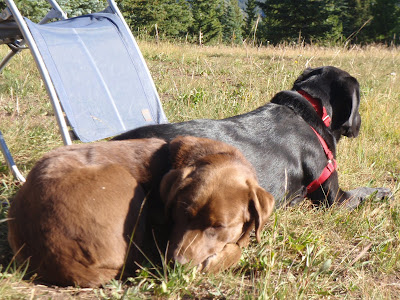 A few seconds later, tension crept into their psyches as a scent or sound caught their attention. 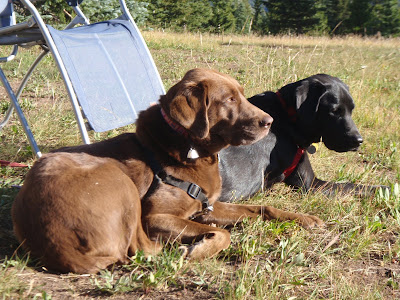 A split second later, something invisible aroused them to ferocious protective behavior. It's interesting to note that K moved in front of her little brother, R, in this 'dangerous' situation and took a more aggressive posture. While K was leaning forward with her fur raised and her tail stiff and high, R leaned slightly backward and hovered closer to the safety of the van. We noticed repeatedly on this trip that, as he barked and growled at something alarming, R held his tail low and remained behind K. Despite her insecurities, I think that K still rules the pack. 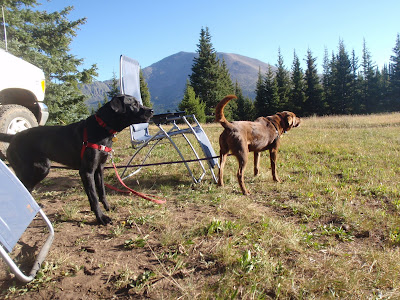 Shortly later, the boys headed out for a run while K and I rode toward the Monarch Crest Trail. Although the skies cast a stormy light from the start, no true storm cells moved through until mid-afternoon, after all of us had left the exposed trail. 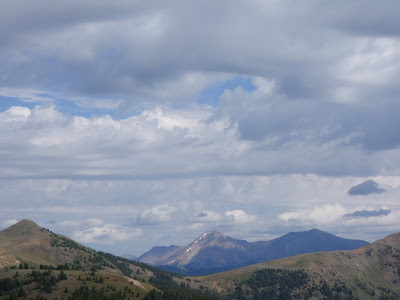 For K and me, it was a glorious day. We moved in silent synchrony, knowing each other so well that 'commands' were superfluous. K moved gracefully and effortlessly through the gorgeous tundra, and I spun along the undulating trail. I kept thinking how lucky I am to have a dog like K in my life. I treasure every single day that we both are healthy enough to have alpine adventures together. 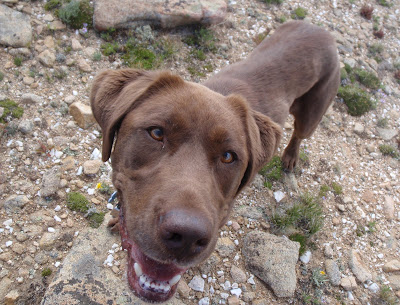 Amazingly, this popular trail was almost devoid of other travelers, and K behaved perfectly when we encountered just a few people. She sat calmly next to the trail to let them pass. I started thinking that her thyroid medication adjustment was working - because calmness around strangers deserts her when her thyroid levels are wrong. We won't know for sure until she has a blood test in another couple of weeks.

Many more flowers persisted in this harsh alpine environment than I expected. 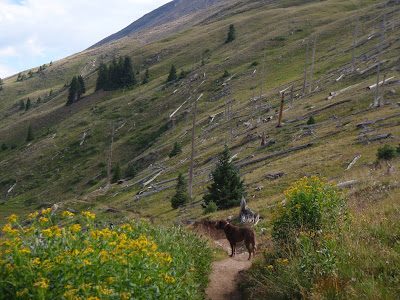 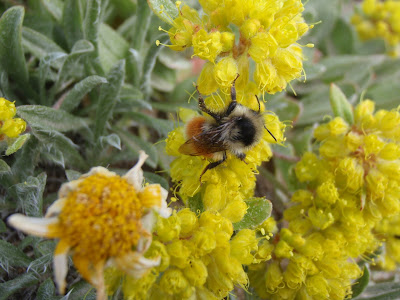 Red Fairy Trumpets mixed with a Harebell on a warm south-facing slope with almost no wind. Upon seeing such a beautiful sight, I thought of S, our recently departed Yellow Lab. I sorely miss him. 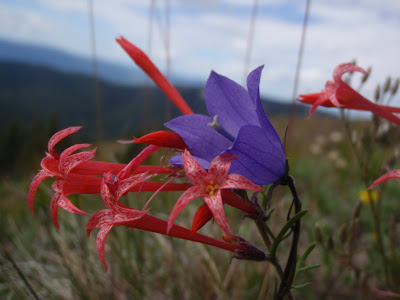 On a moist hillside meadow, I caught a glimpse of tiny purple flowers with hairy fringes in their centers - 'Little Gentians' (Gentianella acuta). After noticing one plant, I realized that they covered the tundra in that area. Blooming Gentians tell us that the summer flurry of life is inching to a close. 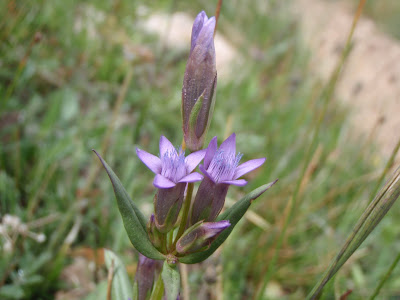 On the windy and exposed ridges, the low-lying cushion flowers, like Alpine Forget-Me-Nots and Moss Campion, had finished blossoming and no other flowers had risen up to replace them. This rocky, windy, and cold habitat is too harsh for most flowers. 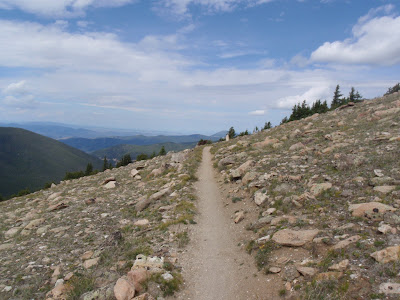 Those windswept sections struck me as stark but glittering moonscapes as the rocks sparkled in the sunlight. 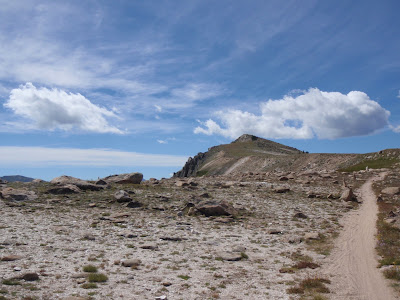 From these exposed spots, views of the nearby mountains awed me. 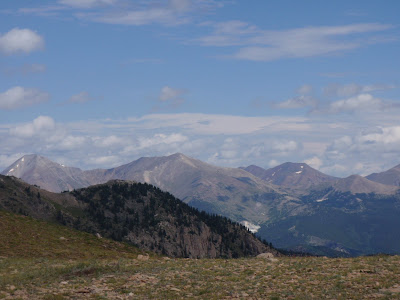 As we rolled back into camp after an uplifting ride, I noticed that odd-looking flowers littered the sun-drenched meadow, Nodding Groundsels (Senecio bigelovii). From what I've been able to learn, these flowers don't ever open much further than in the photograph. I saw the same species later in the trip near Silverton where they'd passed their peak blooming time and turned purple. 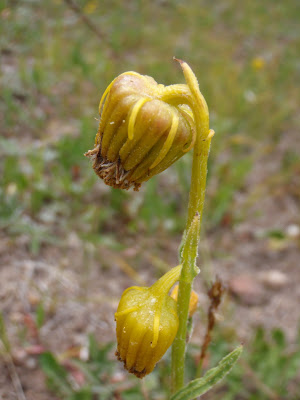 As we glided to a halt, I knew that K and I had shared a special adventure that I won't soon forget. Happily exhausted, we found the rest of the pack, including our goofy Labrador lapdog, relaxing in the peaceful meadow. Despite his size, R believes that his place is on someone's lap whenever possible. We were surprised to learn that his canine mom shares this belief. Do you think lapdoggedness is genetic? 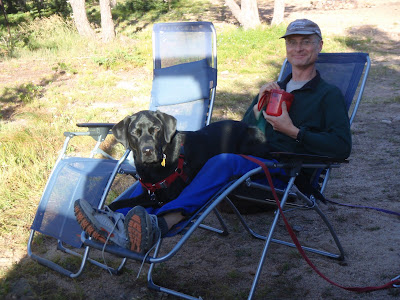