After an idyllic interlude near Marshall Pass, our next short leg toward southwest Colorado led us to Crested Butte. Crested Butte is a wildflower and mountain biking mecca. We camped there briefly, intensely enjoying the lushness of the mountain meadows. The roughly 20 ft of yearly snow that gradually melts over the summer provides the moisture for green grass and riotous flowers. 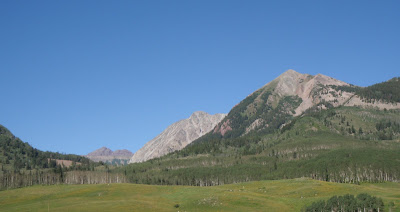 Our campsite was nestled in the midst of a tangle of wildflowers near Schofield Pass. Subalpine Larkspur towered over the others at almost 3 ft tall. A parade of Broad-tailed Hummingbirds stopped to drink its nectar on their southward migration. I'm guessing that the nectar hides in the long 'spur' of the flower because the hummers almost disappeared into the flowers while drinking. 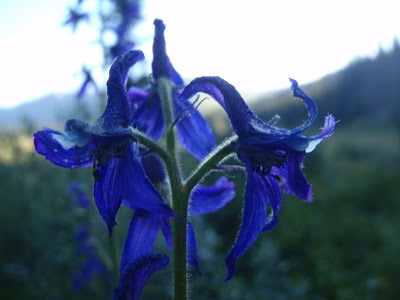 Broad-tailed hummingbirds follow the flowers during migration. In the spring, they fly along the Pacific coast, where flowers are already blooming, on their northward journey. During that springtime flight, snow still buries the mountains. In late summer, when the mountain snow has melted and the alpine flowers are flourishing, the Broad-tailed hummingbirds follow the Continental Divide southward. We saw this pattern in action. During our June vacation on the Divide, the eerie absence of buzzing male hummingbirds caught my attention. But, this August, their buzz permeated the thin air as they zoomed over us to the south.

Lupines also adorned our campsite. The hummingbirds ignored these jewels but the bees drank from them all day long. 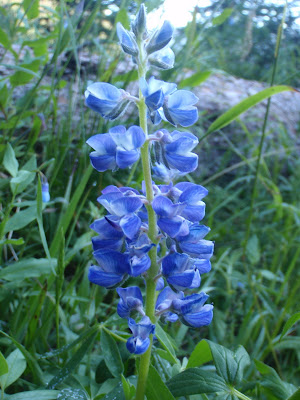 Scarlet paintbrush flowers splattered the blue hue of the lupines and larkspurs with pink. 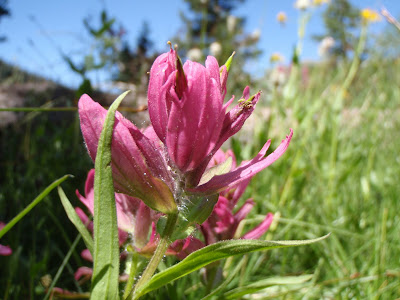 On the edge of the conifer forest that loomed over our camp, Fringed Parnassia (Parnassia fimbriata) flowers caught my eye. I'd never seen them before. They like moist and shady sites, just like our campsite! 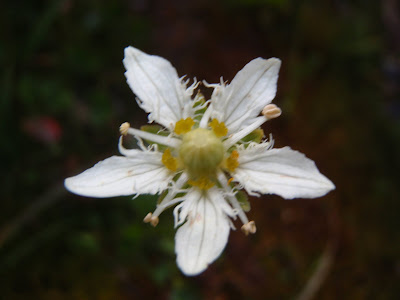 On the afternoon of our arrival, we hiked upward in Paradise Basin, the valley where we camped, soaking in the sight of the "Maroon Bells" mountains peeking over the closer green mountains. 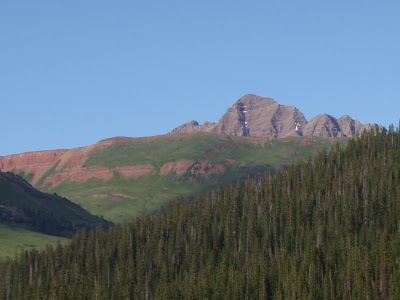 As we walked along the creek that carved our valley, we found a hillside of shale with abundant evidence of the immense inland sea that covered this area 100 million years ago. Every piece of shale within my reach seemed to hold the fossil of a shell. This shell fossil was about 1.5" long. 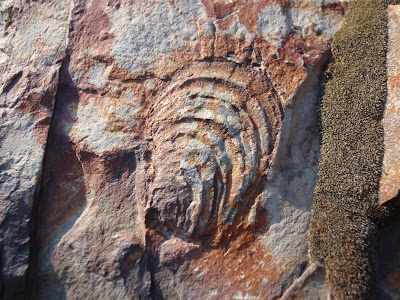 Discovering hints of the ancient natural history of our Earth makes the geological processes that shaped our landscape seem almost tangible.

Arriving back in camp, we remembered why this valley harbors a plethora of wildflowers - moisture. And moisture allows bugs to swarm when the temperature is right. We had a brief onslaught by winged predators. To escape, R decided to hide under our van. He stayed there until the bugs abated, making me think that it might be an effective strategy. Maybe I'll join him next time. 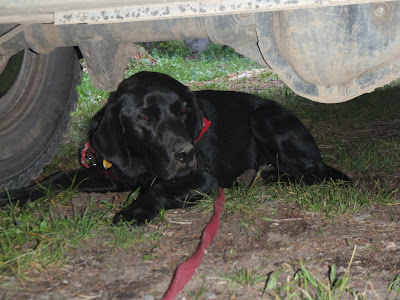 The next morning dawned freezing, and I mean literally freezing. The water in the dog bowl froze. I was reminded that we'd stayed in this campsite before, and most of my photos highlighted our departed S, who hated the cold, swaddled in sleeping bags. Those photos should have reminded us of how utterly bone-chilling this place was every morning. 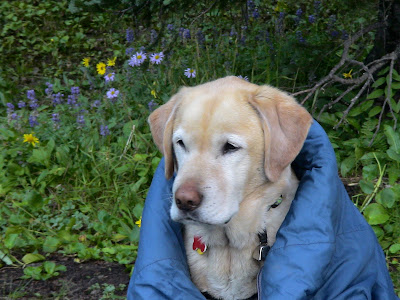 Our campsite sat on the eastern edge of the valley with an imposing mountain blocking the morning sun. Below, the view to the west shows the sun line inching toward our dark and cold nook. 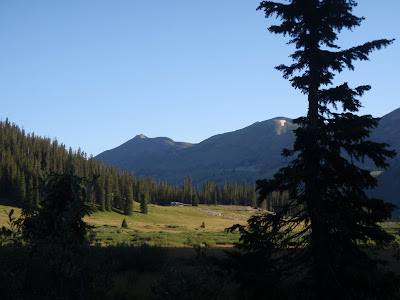 By the time K and I headed out for a spin up Paradise Basin, I couldn't feel my toes or fingers. I headed for the nearest sun-drenched uphill trail, hoping to work up some warmth. Still, it took a full hour of riding before I could feel all my extremities.

As we climbed, I spotted Columbine flowers, bleached almost completely white, on the valley's wall. What a sight! 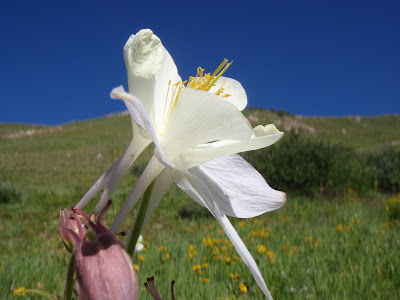 At the top, cool mountain lakes awaited my Labrador companion. But, I knew that the air was truly cold when she decided to gaze at the view instead of swimming! 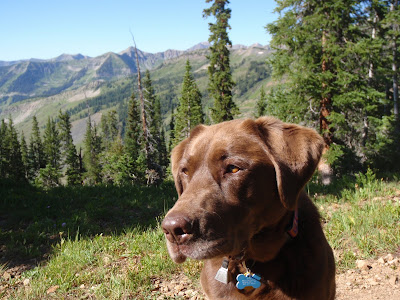 After a short ride with K, I headed out to ride the classic Crested Butte Loop, "The 401". I started at the top of the loop, first climbing to a high plateau with incredible views. 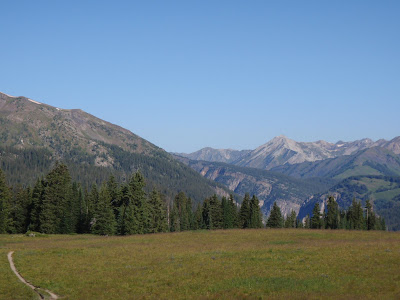 Then, I zoomed down a sinuous singletrack trail cut into the mountainside.Wildflowers lined the trail, sometimes obscuring it so much that I couldn't see the next curve through them! Towering yellow flowers brightened the view of the mountains on the other side of the valley. 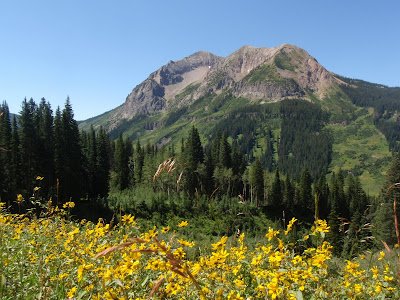 As I swooped down to lower elevations, the trail curved through towering stands of aspen. 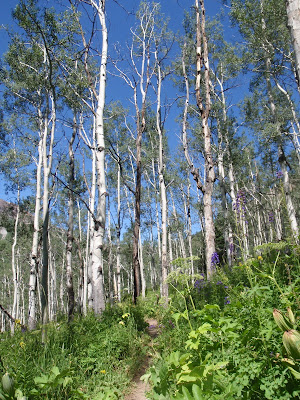 Occasionally, I saw a longer range view of the valley with a sheen of either fog or smoke creeping up it. The dirt road in the valley would later be my route back up to camp. 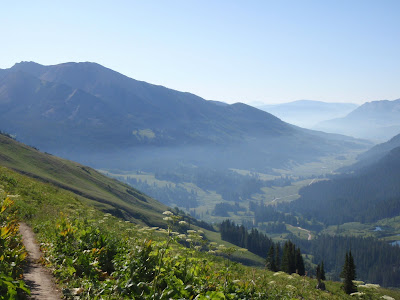 Eventually, the amazing descent ended at a gulch far down the valley. I passed through the parking area for mountain bikers who drove to this spot, then pedaled up the road, and finally descended the singletrack. As I passed through, a group of 'dudes' climbed onto their bikes, starting about 50 yards behind me. As I spun along enjoying the views, I heard them huffing and puffing behind me. Finally, one said to another: "Dude, it's a girl!". Obviously, testosterone drove them to try to pass me, the "girl", and leave me in the dust but it wasn't as easy as they expected. Eventually, they hammered by me, only to dangle about 50-100 yards ahead of me for the whole long climb. Their weakest member finally 'blew up', and I kept my steady pace to climb past him. The funniest part was that, when we were still out of sight of his buddies who'd just rounded a curve to the summit, he sprinted furiously to get in front of me so that they wouldn't know that I'd passed him. My husband said that I should've stopped and congratulated them on beating a middle-aged lady with a fused back who actually stopped to take photos. But, I restrained myself.

Despite the 'racing' drama on the climb, I stopped to photograph Emerald Lake, glinting deep turquoise in the sun. 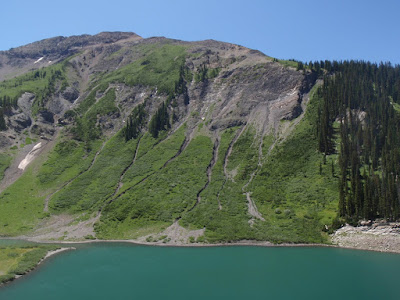 All in all, I love the flowers and terrain of Crested Butte but I think that it's getting too popular and too crowded for my taste. Once we moved further west to the San Juan Mountains, we found some true wilderness with almost scary solitude on the trails.
Posted by KB at 6:19 PM