The timeless forest prepares for winter 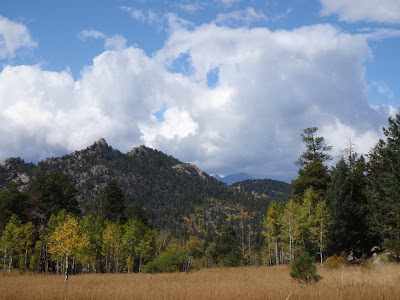 This morning, the specter of winter loomed on the horizon in the form of an inexorably advancing wall of clouds. A chinook wind whipped off the peaks, blowing the new season toward us. Forecasters say that freezing temperatures and perhaps even snow will pummel us in the coming days. I haven't seen a hummingbird in a few days - just in time, from the viewpoint of our tiny flying jewels. 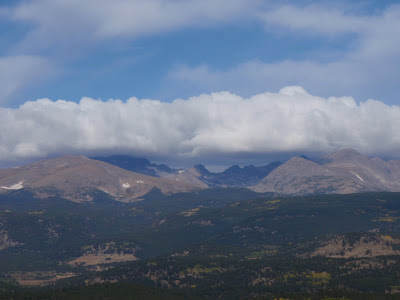 Meanwhile, a few miles from the Divide, the warm sun baked K and me, more than compensating for the wind, while we stopped on a granite hill during our mountain bike ride. I wore a sleeveless jersey and wondered if it would be the last time this year. After K took a brief ramble off our peak, I called her and a side wind blew one ear skyward as she galloped to me. 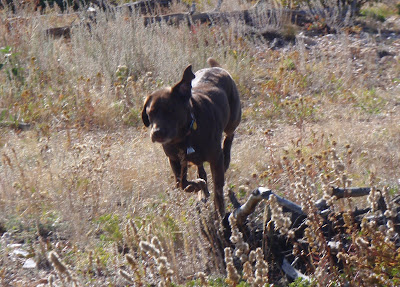 The force of the wind ripped yellow aspen leaves from their moorings today. The photo below shows the blurred aspen leaves on the trail as K ran along side me. 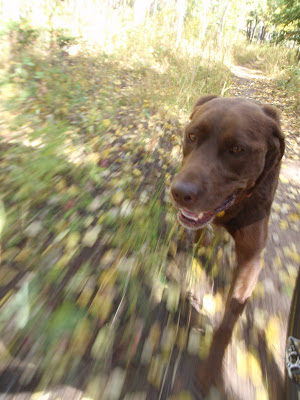 When we passed through sheltered sections of forest, the scene remained warm and autumnal. 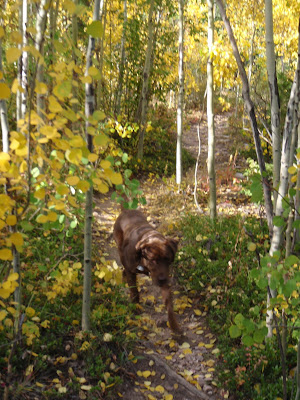 K acted frisky during our short ride but I continue to worry about her. She's drinking and urinating more than usual - and of course it's a weekend so my regular vet office is closed. I'm a champion worrier - but I wonder if I'm seeing hints of collateral damage from her pancreatitis. I'll be talking with my vet soon.

After our joint ride, I left K at home and headed out on a favorite loop. After yesterday's exploratory adventure that involved lots of bike pushing and even carrying, I (and my aching spine) wanted to spin the pedals for my whole ride. So, I chose a route on smooth established trails replete with mountain and aspen views.

Near the start of my ride, I tunneled through gold aspens and remembered that blooming columbines and ninebark flowers leaned over the trail in this grove just two months ago. Now, the changing leaves of those plants lend the ground a rust hue. The transformation over such a short time boggles my mind. 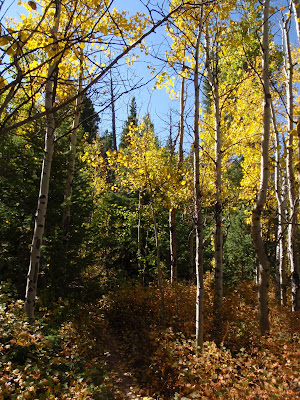 I rode along a ledgy trail and had trouble focusing on the frequent rocky obstacles because the view over the Divide mesmerized me. 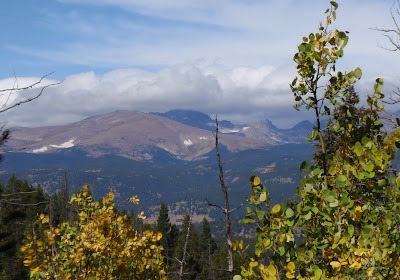 I emerged onto a plateau with expansive brilliant aspen groves. Imagine, all of those trees are part of one organism, the grove, joined by underground roots. Many groves have lived thousands of years. Every year, without fail, their leaves morph to yellow and then flutter to the ground in preparation for winter. Losing their leaves too early stunts their growth by shutting down leaf photosynthesis. But, losing them too late can be catastrophic if an early heavy snow hits. It's a delicate balance. As a side note, a cool thing about aspens is that they have chlorophyll in their bark so they can photosynthesize energy in fall and spring when the sun shines strongly but their branches are bereft of leaves. 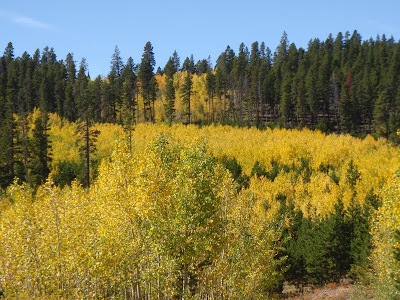 When I travel through vast aspen groves that might be a thousand or more years old, the forest feels timeless to me. I'm a temporary speck in the aspen grove's world view - and the grove keeps marching through its seasonal cycle while paying no heed to who walks among its trees. I'm astonished by the thought that grizzly bears wandered here, probably even in this exact grove, before humans extirpated them in the early 1900s. Wolves also lived here and likely hunted in the hallowed ground under the grove - before they, too, were hunted down and eliminated. How the world has changed - but the aspen grove remains. 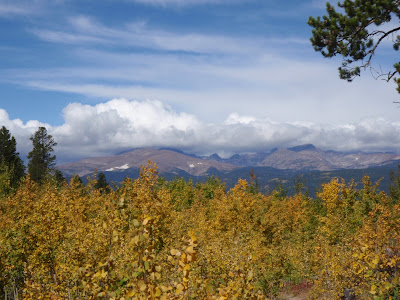 I wonder if the Divide will be snow-covered in the next couple of days. A distant peak has maintained its snowy cloak all week. Winter is coming. I'm sure that we'll have a few sporadic summery days but they'll be the exception rather than the rule. 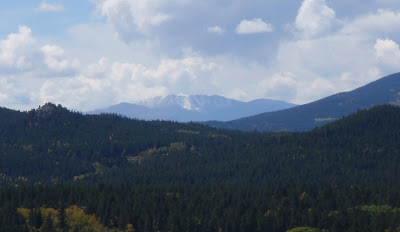 A yearly question is worrying me once again - should I see if my basil can survive the cold (in a tent) or harvest it all? It's the conglomeration of all the little decisions, like the basil one, that make up the fabric of daily life.
Posted by KB at 4:38 PM