Because of winter weather in the Utah desert, we had to try to slip our camping trip into a window of good camping weather. On the day that we had initially planned to depart, the Utah desert was getting 6-12" of snow dumped on it. The snow went on for days and the temperatures were very cold. In fact, the snowfall was equal to the usual total snowfall for the entire winter in the canyonlands area.

So, we waited while anxiously checking the forecast every hour or so. Finally, we spotted what appeared to be the last day of bad weather in Utah and the start of a week of sunshine. So, we pointed the LabMobile toward the Utah desert, driving through the remains of the snowstorm.

We arrived in the afternoon, and when we approached our first planned camping spot, it immediately became obvious that it was impossibly mired in snow and very sticky mud. So, we revamped our plans, heading for a spot that we call "K's Rock".  We've named it that because remember a wonderful time there with K on her last trip to the desert. It turned out that K's Rock was planted in the midst of a relatively dry area. We had no problems driving, mountain biking, hiking, or running on 4WD roads and trails near K's Rock. So, it felt like paradise.

We thought that we had hit the weather window perfectly. The first night seemed to promise an amazing vacation of clear skies and relaxation. As many of you know, I love night photography, particularly in the desert on a clear night. So, I pulled out my tripod, and I set up my camera to take many exposures of the night sky, with plans to make photos of the the stars "spinning" around the North Star by combining the exposures. I haven't yet processed all of those exposures because one image captured my full attention. 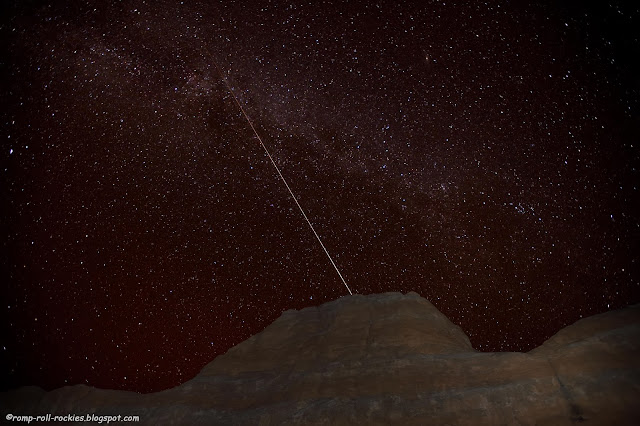 I was lucky enough to capture a meteor plummeting into the Earth's atmosphere behind K's Rock.

A sign from the heavens? I think so. K is always with us. Always and forever.
Posted by KB at 8:02 PM