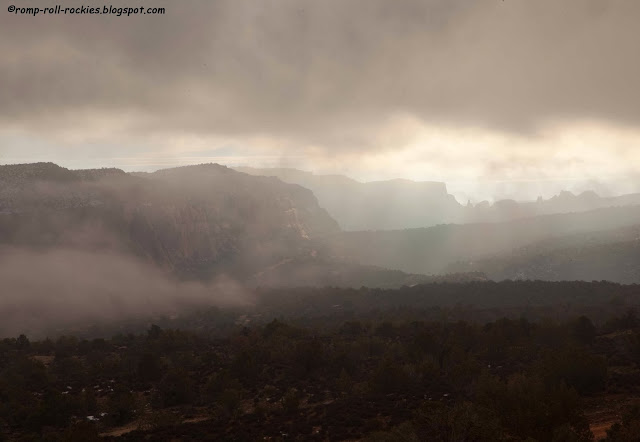 It would creep up the canyons toward us and then retreat. 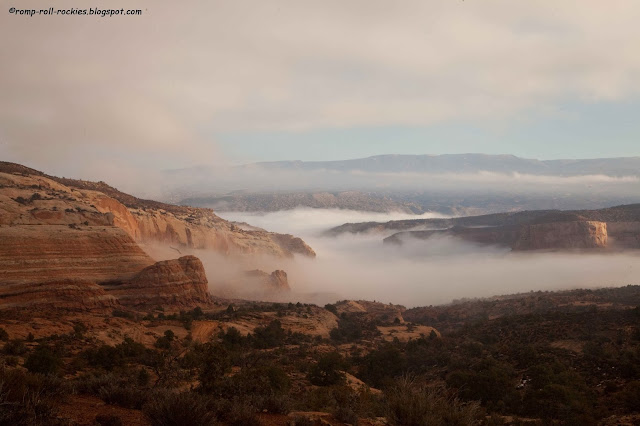 By that point in our trip, we'd decided to stay at K's Rock for the duration of our time in Utah. We reasoned that it would be more relaxing if we didn't move around. We also were leery of how much snow and mud we'd seen in other areas.

However, we didn't have enough water and food to last an entire week without resupplying. So, we decided to spend the daylight hours in camp and then to drive the 30+ miles to Moab for a resupply run.

The sun didn't fully shine all day but I took some photos of the Duo. R looked so handsome against the red rock. 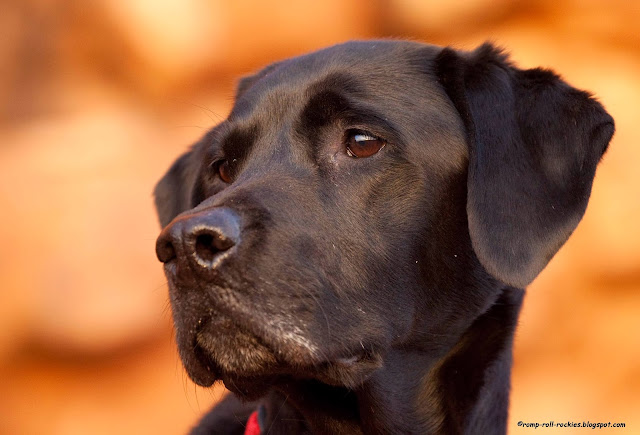 He and his sister focused on sometime behind me. I don't know what. 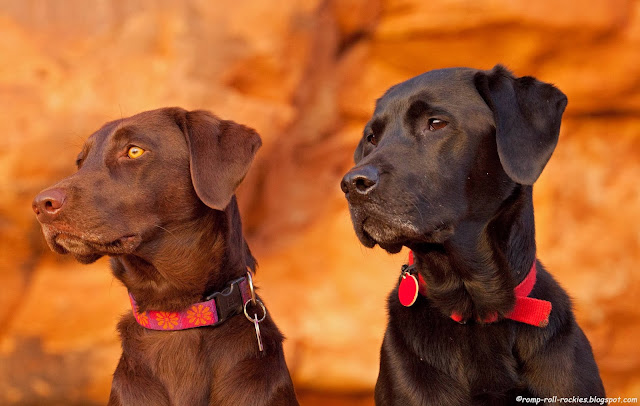 Then, Shyla turned toward me, just before the Duo bolted away and started playing wildly. 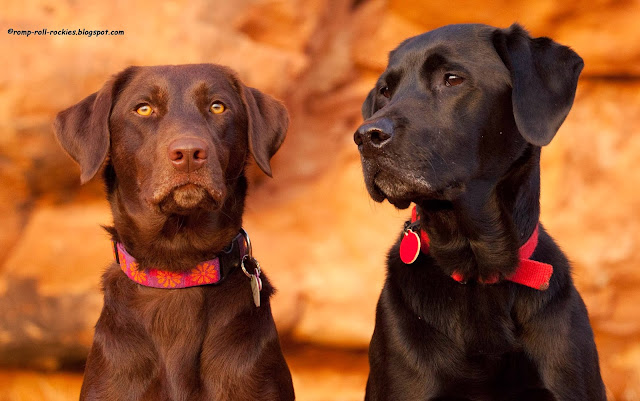 Dusk fell shortly after that, and we hopped in the Labmobile to drive to Moab. We left a tent, a couple of chairs, a camp stove and a few other small items to "claim" the campsite.

We drove along the Colorado River, enjoying the foggy dusk light on the cliffs and water. Then, I smelled something funny. Just as I mentioned it, the LabMobile lost power. The Runner managed to coast until he could pull into one of the extremely rare pull-outs along that tortuous road.

The engine had conked out and refused to restart. The Runner tried to figure out what was wrong, and a nice couple stopped to try to help us. However, it seemed to be something very major - not within the realm of a roadside repair.

That canyon has almost no cell reception so we assumed that we couldn't call anyone and would have to spend the night in that pull-out. Then, just in case, we decided to walk around outside the LabMobile to see if we could get even a single bar of cell reception, and we did!!! We called 911, who sent a "wrecker" to transport the LabMobile and us to Moab.

Let me tell you - that was a very scary ride. The van was anchored down atop a platform behind a strong truck. We rode in the van. At first, I closed my eyes because the sight of the big Colorado River down below us as we wound along this crazy road from such a high perch was terrifying. Then, I realized I was going to get carsick if I kept my eyes closed so I spent the rest of the time rambling on and on about how much experience I was "certain" that the driver had. Indeed, he drove very safely, and we made it to Moab fine.

He towed us to his repair shop, and he rented us a Honda Civic so we could get around. However, it was late at night so we just went to sleep in the repair shop parking lot (inside the LabMobile). That was not a great night, let me tell you!

The next day was Thanksgiving so the mechanic wasn't working. We found a dog-friendly hotel, and we checked in. That was challenging for Shyla because everything about staying in a hotel was new. And, it wasn't a quiet hotel. The sounds of loud kids' voices in the hallways seemed to spook her. But, she gradually settled in, realizing that we'd keep her safe. We even managed to go a short distance outside of Moab (in the rented Civic) for a short bike ride/run in the foggy winter air, and that was fun. 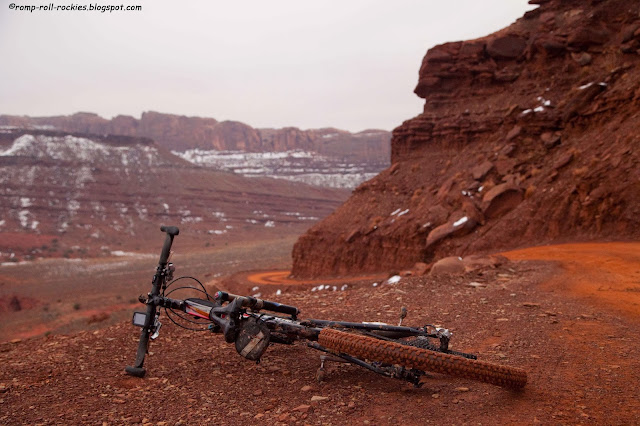 Amazingly, the repair guy diagnosed the problem as a blown alternator by 9AM on Black Friday. And, he found the necessary part in Moab that morning. We had our LabMobile back by that afternoon!!! We were so impressed with the mechanic. He was honest, polite, and very good at his job.

As we drove out of Moab (Yay!), we started wondering if our "stuff" would still be at K's Rock when we returned. Much to our delight, no one had touched our camp (in fact, I don't think anyone had even been near it). It felt so good to be "home", even if our resupply trip to town had taken 2 days longer than expected and winter had arrived at K's Rock while we were gone!
Posted by KB at 6:01 PM