Our Black Dog had a very good week in some ways. His eye pressure plummeted to low-normal after his ophthalmologist tweaked his eye drops. That means that he gets to keep his eye, at least for now. To be honest, the only reason why we celebrated was that he doesn't have to go through another surgery. We'd love him just the same even if he lost his remaining eye.

In fact, he often closes it so this is how he'd look - still very handsome in my opinion! 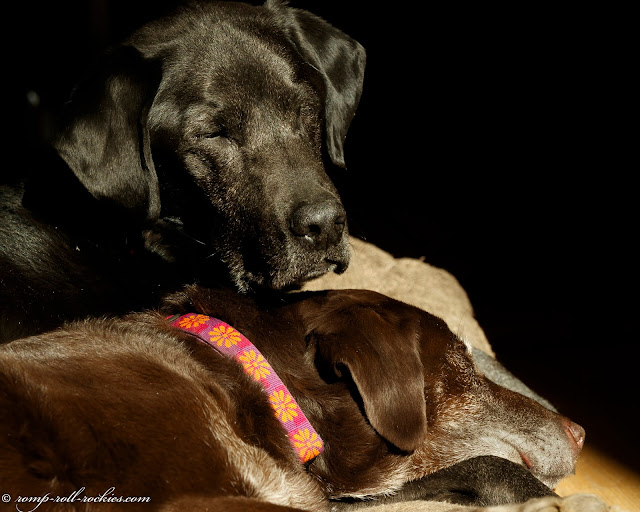 He is continuing to gain confidence in navigating inside the house. He walks with some speed and assertiveness. Even hard collisions with things do not slow him down. The only downside is that, when he runs into something, it's usually a "boom" of a collision. So, I've ordered him something called a "halo" for blind dogs - which will protect his face. You'll certainly see a photo in a future post.

On the less good side of the ledger, he had his "senior blood panel" which showed that he probably has an ulcer. We stopped his NSAID and put him on ulcer meds. We are hoping that it resolves quickly so that he doesn't have to go through a lot more diagnostics. His low hemoglobin might be a big part of why he seemed very off a couple of weeks ago.

No matter what, he is a happy dog. He and his sister are two peas in a pod. 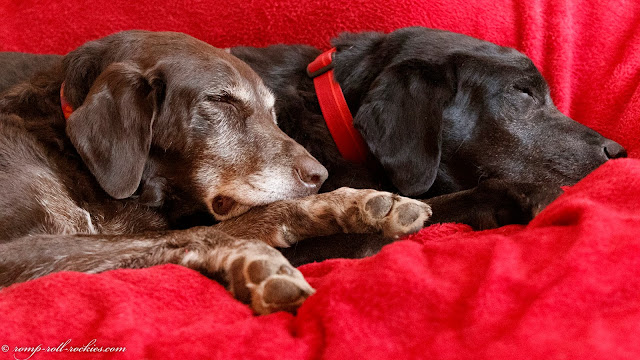 So often, when I get home in the afternoon, I peek to see what they are doing. Then, I tip-toe to get my camera without waking them up. They melt my heart almost daily.

Snow is expected tomorrow, and our Black Dog LOVES that!