Our Black Dog arrived in our lives just before Christmas of 2007. He was flown to us in a climate-controlled hold in a jet. It wasn't a long flight but he was only 8 weeks old.

It was a bone-chilling day in Colorado. We drove into a windswept parking lot near the hangar where we were told to meet R. The attendant told us that he had not deplaned yet. We didn't totally believe her so we scanned the crates that were on a rack nearby. A little black nose and big brown eyes peered back at us. It was HIM!!!!!

We tried to contain our excitement while we signed the forms to take him. The attendant worked SO slowly. Sign this, sign that... and then a high pitched bark emanated from puppy R's crate. Maybe he knew that we were his people?

When we finally could go to him, we opened the crate and scooped him up. He was so cute, cute beyond words, but he had peed and pooped in his crate. It was all over his fur. He smelled horrendous but we still wanted to pet him and snuggle him. However, a little puppy being wet in the wicked wind chill outside was not good.

So, after we'd both met him, I put the stinky little guy inside my winter jacket to walk to the car. The Runner drove, and I sat with eight pound R inside my jacket all the way home. His nose was outside the jacket, and he kissed my chin whenever he had a chance.

When we arrived home, he had a bath and a nap. Then, he met his big sister, Angel K. 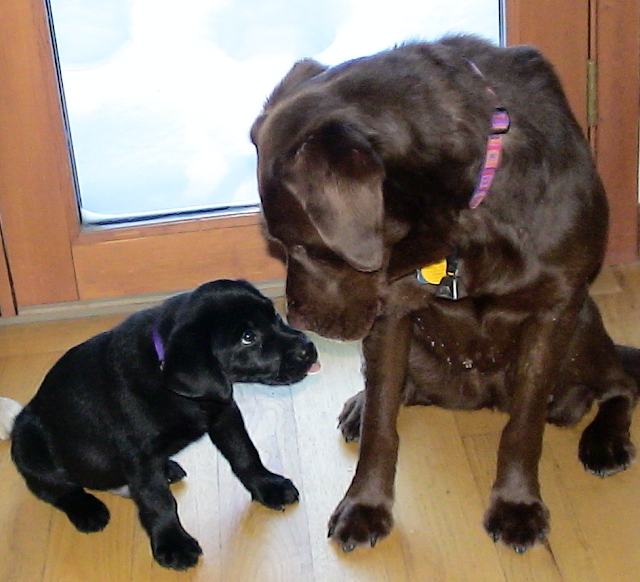 They loved each other almost right away.

Thus, our love affair with our Black Dog began. We'd go on to have almost 13 years with that wonderful little puppy. Despite the heartbreak of the end, we would do it all over again. The love of those 13 years by far outweighed the final heartbreak. His gentleness, fun-loving spirit, and love made him such a special dog.

As an aside, I will probably be offline for a couple of days. I will be back.