Fire news - little rest for us

We didn't get much of a rest. Until about mid-day yesterday, our world seemed calm and peaceful. The wind was blowing the existing fire away from us, and it was a beautiful day.

Then, I saw someone post that there were reports of a fire very close to Lab Valley. I followed the post, and the information was being corroborated by others. We did a mad dash, quickly putting all of our packed stuff into two vehicles. We were out of there very fast. It was too close for any wavering about the need to flee. Smoke was starting to seep into Lab Valley when we departed.

As we drove away, I saw the smoke plume that was already being generated by the fire. Lab Valley is to the left of the fire plume in this photo. 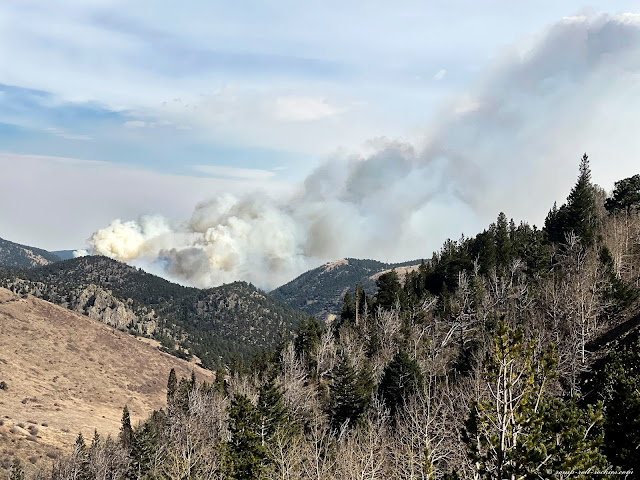 Now, we're at our old house, following the news. So far, it appears that the fire is being blown away from Lab Valley. I feel badly being even slightly happy about that because I know that it means that others are in the path of the fire. I even think about the wildlife who I am just starting to know. Their habitat is being burned.

I am exhausted and numb. We've found our paradise at Lab Valley, and now we are hoping to get out of this fire season with it intact.