So There, Mr. Truck Driver!

I woke up and peered at the skylights to see if we'd had more snow. I didn't like the answer the snow-shuttered glass panes gave me. But, then I glanced toward the east. Wow. 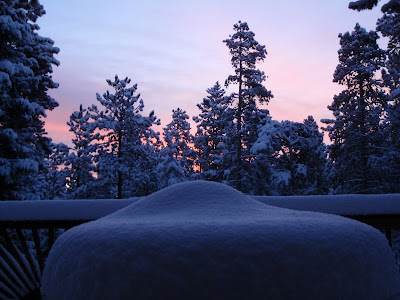 When I walked outside to decide whether I could ride my bike, a pristine white and blue world met me. 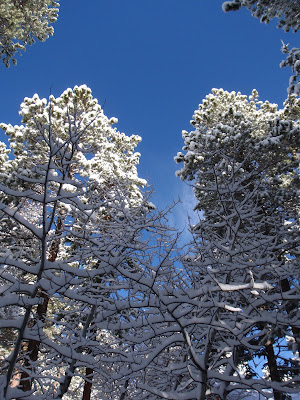 I perused our dirt road, and the snow hadn't started melting yet. With my gnarly studded tires, I felt certain that I could ride my mountain bike on the road. I rushed back to the house, donned my cycling gear, and headed out. Alas, while I'd been changing clothes, the road had turned into a roux of mud and slush, interrupted by an occasional pond of brown slushy water.

Most drivers around here are incredibly kind, giving me lots of room, and trying not to spray me with road slush. Some drivers even stop to let me cross a slush pond ahead of them to avoid spraying me. So, today, when a pickup truck driver stopped on the opposite side of a muddy slush pond and waved me to go through it, I initially thought "What a nice guy!".

But, his intentions were not as kind as I thought. He was setting me up for a mud and slush shower. As I started to pedal through the abyss, he accelerated directly toward me and swerved away at the last minute, covering me in a spray of muddy slush from head to toe. A not-so-nice string of words poured out of my mouth but I refrained from saluting him. A multi-ton truck will always win over a bike.

I was soaked to the bone, covered in mud, and couldn't see through the sludge on my sunglasses. It took a mighty mental struggle not to head directly home. But, I reasoned that if I aborted my ride, the idiot in the truck would have won. So, I kept riding, and the intense sun began to dry my clothes. By the end of the ride, I was comfortable again and having FUN. So there, Mr. Truck Driver!

The main reason why I went out on my bike in such horrid conditions was that I thought that my recent neck flareup had been caused by a snow-induced layoff from outdoor riding. It seems as if I was right. I felt the muscle knots ease while I rode, and they haven't returned. So there, Mr. Truck Driver!

Once I'd wiped the sludge off my glasses and had started to dry, I noticed the beauty of the world around me. The snowy and cloud-veiled mountains:

A half-thawed pond with two barely visible ducks paddling in it. Those are hardy souls! 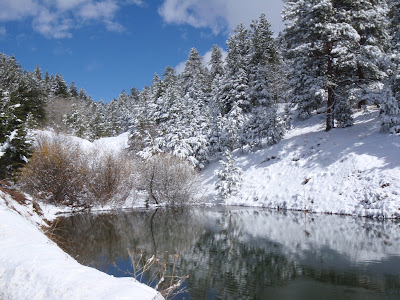 By the time I finished my ride, the blue sky had turned to gray and snow drifted down from it. I took off my entire outer layer in the basement and stowed it in a garbage bag for direct transport to the washer.

In the subdued light of a mild storm, the Labraduo and I went for a wander. They obsessed over rodents. R stood with his ears cocked and then pounced like a coyote. He started digging and K soon assisted him. 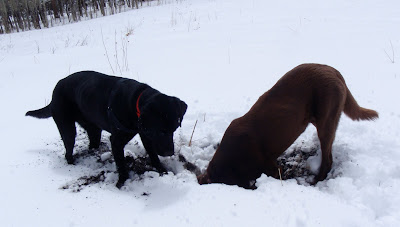 K quickly lost interest but R had to be lured away from the hole. I suspect that there was a rodent under there somewhere! 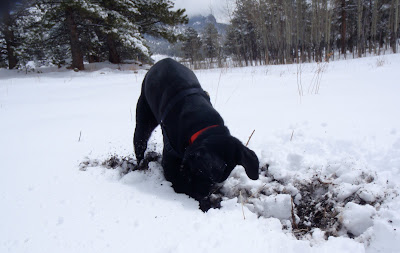 Near a viewpoint, the duo practiced a sit-stay. R has finally matured enough to reliably hold stays for me in the forest. It's such a convenient skill for a dog to have. 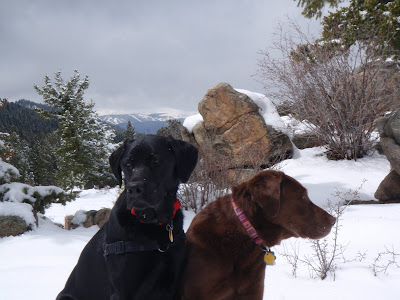 I asked him to hold another stay a little later in front of a fabulous view. However, I don't think that it's possible to capture the details of a black dog's face AND the bright mountain background. So, this photo lets you see our handsome boy. 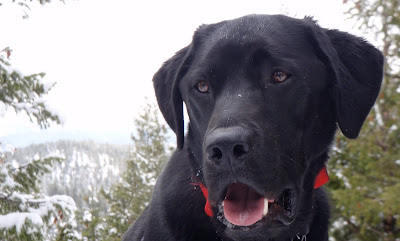 We meandered through aspen groves, and found a nest hole that a Flicker pair was renovating. They'd pulled a lot of dried grass and other nest material out of the hole, and it littered the ground below the tree. For many years, Williamson's Sapsuckers nested in this hole. Last year, the Sapsuckers moved to a tree about 20 yards away because the Flickers had usurped the prime nest site. 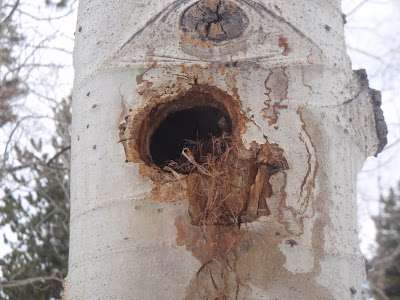 Actually, I'm surprised that it's a prime site. Look at the bear claw marks climbing up to it. Perhaps the cavity is too deep for a bear tongue to steal eggs or nestlings. 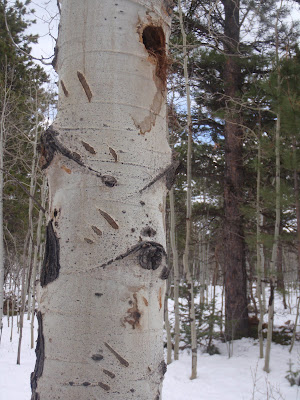 When I arrived home, I discovered interesting coyote interactions recorded on my wildlife cameras. A lone coyote often forages under our birdfeeders at night. Two nights ago, a second coyote arrived and immediately started badgering the lone, and probably less dominant, coyote. The aggressor briefly departed, and then returned, making a beeline straight for the lone coyote. I found the similarities to dog body language to be uncanny. Enjoy!