Sweet break in the snow and coyote social behavior

This morning, K and I took a mountain bike ride in the blustery sub-freezing air. You'd never guess that it was almost May here. Near the start of our ride, something invisible to me irked K - perhaps it was a wild animal or the one other trail user. To get her attention, I asked her to sit and look at me. You can tell by the photo that, although she was following my instructions, her ears, nose, and mind were focused elsewhere. 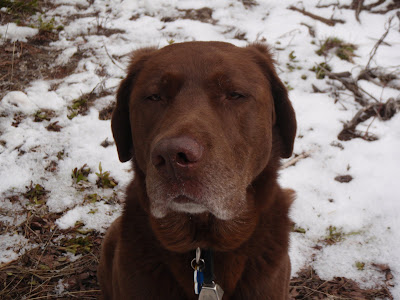 When I ride with K, I often stop to play with her or do a little training. Today, we worked on a trick where she puts her front paws on a tree and stays bipedal until I release her. She learned to hold it for a few seconds but not longer. I wonder if it's too stressful for her body to hold it? 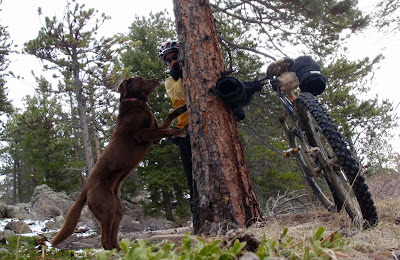 Then, as I checked a favorite path of our big male mountain lion for tracks or other signs, K volunteered one of the many tricks that I've taught her to do on downed trees. 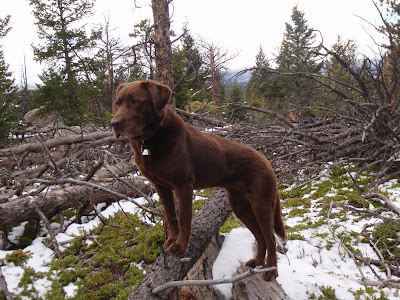 I think that the lion loves to lie in wait in this cluttered area because the deer walk through it to get a drink of water, and the jumble of wind-fallen trees provides the lion with many hiding places. We didn't see signs of him today.

After riding with K, I left her at home to snooze and rode the only loop that I thought might be snow-free. First, I passed a meadow that usually has mountains behind it. Today, a veil of clouds hid the towering peaks. Also, for the first time in weeks, all the summer birds had abandoned the meadow. They probably fled to lower elevations because the temperature hovered slightly above 20 deg F. An insect-eating bird, like a bluebird or a swallow, can't find breakfast in that kind of cold! 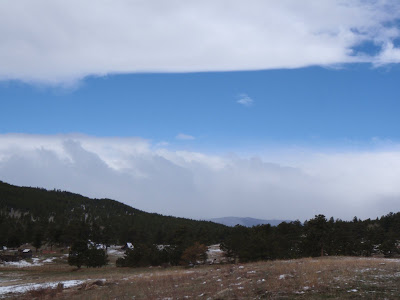 The willows lining the meadow showed signs of awakening. Some of their catkins had begun to bloom iridescent yellow through the gray fuzz that covers nascent catkins. Birds, bears, and other wildlife all eat willow and aspen catkins in early spring so these furry flowers were a welcome sight. 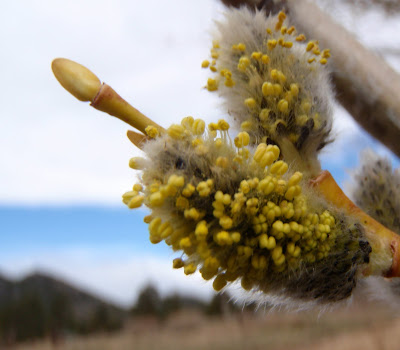 As I rode on 4wd roads toward a ridge whose snow melts very quickly after a spring storm, the sheer quantities of water flowing down every slope astounded me. I think that this was the wettest that I've ever seen our meadows and forests. 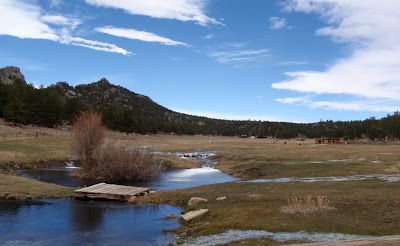 A closer look revealed that the surface of much of the water had frozen overnight and hadn't yet thawed. 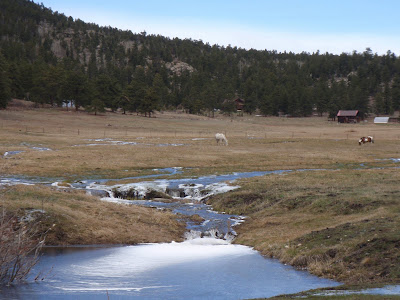 When I finally hit the ridge, the trails were ideal! The sun and wind had obliterated any evidence of the snow. 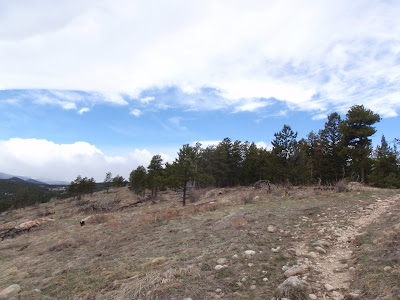 The storms sitting on the horizon made the foothills look smokey and ominous. 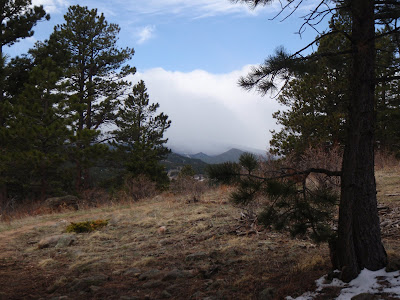 Just before leaving the ridge, I rolled through a forested area where the snow remained, and I discovered that many animals hang out on the same ridge as I do after a spring snow. My favorite, a bobcat, had strutted along the trail. He also left numerous scent markings consisting of scraped pine needles and snow, sometimes topped with scat. 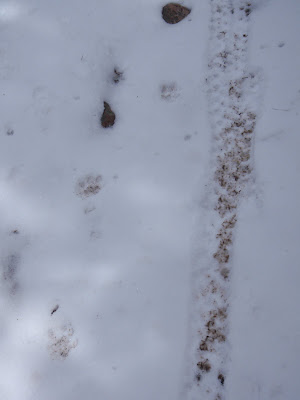 After the bobcat's tracks peeled away from the trail, I saw the tracks of elk, deer, coyotes, and turkeys. I love having tangible signs that these wild animals had tramped along the same path as my bike tires.

I arrived home as the snow started falling, and I discovered that the wildlife cameras in our clearing had recorded another fascinating coyote interaction a couple of nights ago. One coyote had foraged under our birdfeeders for a long time when a more dominant coyote arrived. Watch the body language of the submissive coyote as he used a slinking gait to go greet his pack superior. Then, watch his obsequious behavior as he interacted with the more dominant coyote. He groveled, following the other coyote around and throwing himself on the ground while licking the chin of the other coyote.

I wish that the cameras had captured the initial meeting of the two. However, I found the behavior of the submissive coyote to be so familiar. It fits exactly how a very under-confident dog greets humans or other dogs.
Posted by KB at 4:25 PM