As we've waited to find out if my eye will improve enough to let us leave town for vacation, K and I have taken a couple of bike rides. It's finally been springlike, with warm temperatures, baking sun, and blue skies! 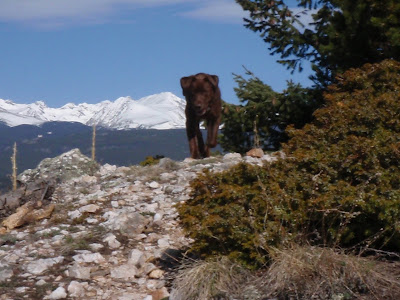 We've had relaxed and fun rides, enjoying our taste of springtime. 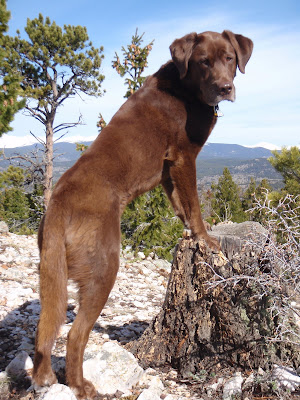 Most of this post is about the bear den that I discovered last February. Last week, I made a sneak visit to the bear den and found it empty. I wasn't surprised because the sow and her yearling cubs had been so active at the end of March. You've seen their wild play in the videos of the trio in past posts.

With the den empty, I quickly looked around the site. First, I saw that the bears had lined the bottom of the cave-like den with sticks. 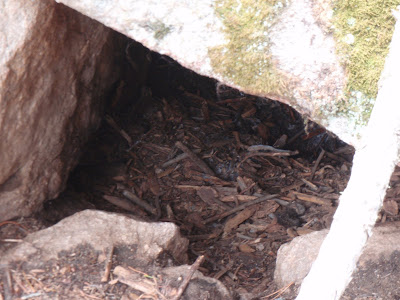 Upon looking more closely, I saw that the den floor was soaked in water due to melting snow. Near the back of the den, couple of puddles had formed. The forested area still harbored some snow that was rapidly melting away. This wouldn't be a good den during the snow melt season. 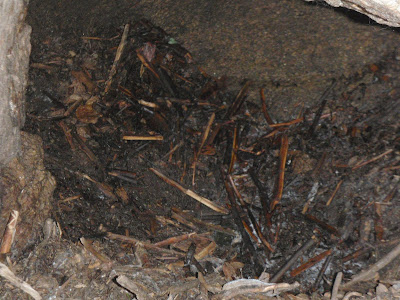 Then, I examined the trees that the bears had climbed. One aspen had fresh claw marks from this year but also had scars from many years ago. 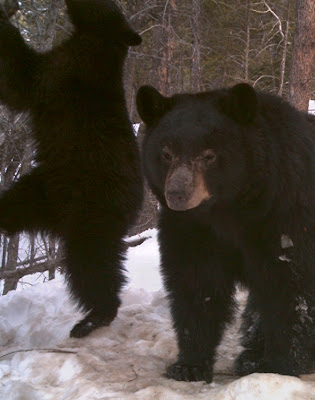 I could tell the age of the claw gauges based on how scarred they were. The dark brown scars on the aspen below were left by bears at least several years ago. Thus, this den has probably been used by bears for many years. 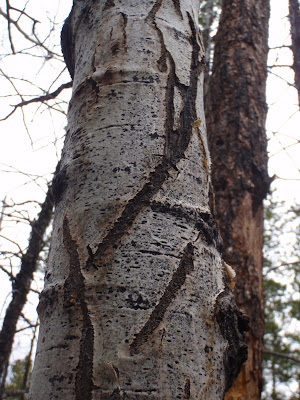 The trio of bears also chewed on the nearby trees. 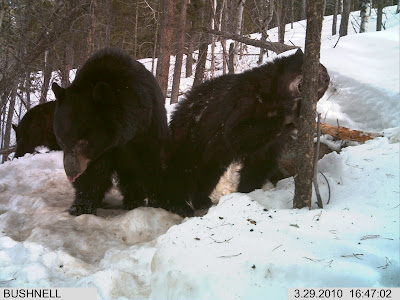 I looked at those trees closely to learn what bear bite marks look like on a tree. The tree that they chewed the most is shown below. Again, I think that the debarking and biting shown on the tree happened over a number of years. 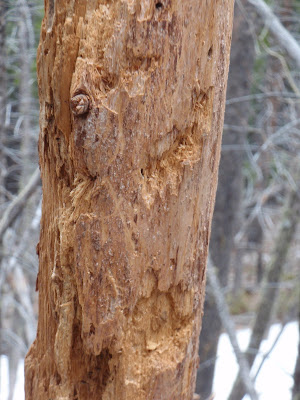 While I visited the den, I exchanged memory cards for the wildlife camera that I have posted there. To remind you of the characters who denned there, here are couple of photos. 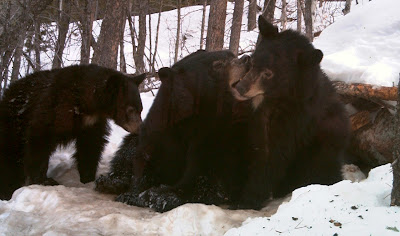 Remember that the sow had mostly brown snout that appeared to be riddled with dermatitis. Moreover, the cubs had light colored spots on their chests. By knowing these details, it is obvious that the bear in the video below is NOT one of the trio. 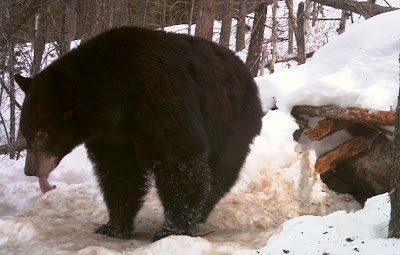 In the video below, you'll see that another bear visited the den after the trio departed. This bear had a much darker face, two distinctive scars on his forehead, and looked smaller than the sow who hibernated there. I'm guessing that the visiting bear was a male based on the scars that he likely got from fighting. I'm also guessing that he was young based on his size. Also, notice how skinny he was after his winter hibernation. He was probably attracted to the den site by bear scent. Or, alternatively, he might have denned there in a previous year and just wandered over to look around.

It was sad to see an empty den and having no idea where 'my' bears had gone. I also noted the lack of food for them at our elevation, except for a a few aspen and willow catkins that have recently sprouted. 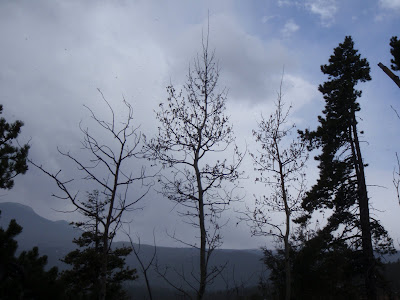 I wonder if the trio wandered to a lower elevation to find more food. In any case, they probably have less than a month left to be a family unit. Then, they'll break up so that the mother bear can mate again.

The break-up can happen in many different ways. Sometimes, although rarely, the yearlings wander away. More often, the mother bear drives them away. If they try to follow her, she charges them and scares them off. In the long run, a female cub will stay near her mother's territory, often taking a section of it for herself. In contrast, a male cub will eventually wander far and wide, searching for a territory without a dominant male bear so that he can settle down.

Finding that bear den was one of the most magical things that has ever happened to me. I'll be forever thankful to the bear family for brightening up my outlook during my recovery from surgery. I still have more footage of the family that I haven't shared, and I'll work on posting it when I return from vacation.

If a bear expert happens to read this post, I have an important question. Will leaving a single wildlife camera posted outside the den make the bears less likely to use the den next winter? I know that statistics say that bears tend not to re-use dens but this one looks like it's been used many times. I do not want to deter the bears from using it again. If any of my readers know a bear expert, I'd be very grateful if you would forward my question to him or her. Thanks!
Posted by KB at 6:15 PM