I've put together the footage of the mountain lions at the mule deer carcass. As you'll see, a mother and at least one kitten shared the carcass and ate almost the entire full-sized deer in one night.

The carcass was cached in an unfortunate spot that receives more traffic than almost anyplace else in our forest. Consequently, a few dogs (not ours) and people stumbled upon the scene. By the second morning, I was told by a runner that her dogs had shown her that the carcass had been moved and little meat remained. In fact, all that remained was bones. The speed at which this full sized deer was devoured made me think that the mother lion might have had more than one kitten with her.

Kittens stay with their mothers for about 18 months. I suspect that the kitten in the photos is almost a year old.

Unfortunately, I didn't get great footage for several reasons. It was an extremely windy time, and the cameras were repeatedly triggered by branches buffeted by the wind. One memory card filled too soon with photos of a waving pine bough, and the other camera malfunctioned. But, I did get SOME footage, and I hope that you enjoy it.

In addition to the lion excitement, K and I have had some amazing rides in our burgeoning spring season. 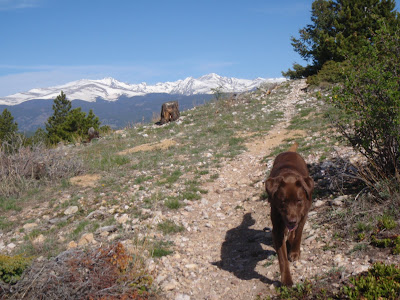 The woods are bustling with activity, and K has been signaling many animal scents. I've stopped many times to keep her focus on me. She seems to stare straight into my soul when we're out in the forest. 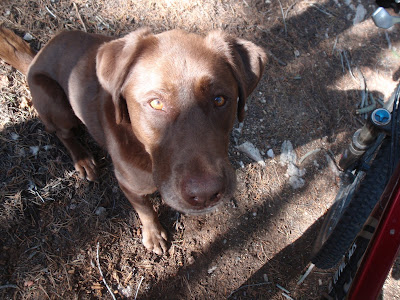 The hills have finally begun to green and more flowers are blooming. Look at that luscious singletrack trail along the ridge with the snowy mountains in the distance. I feel so fortunate that I'm physically capable of riding my bike! 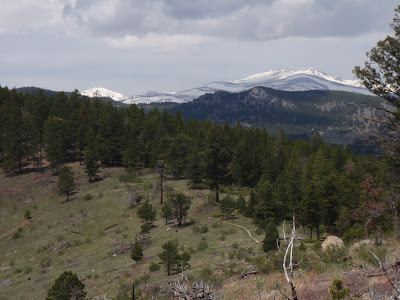 And, today, after I dropped K at home, I saw another bear. I didn't manage to get a photo because it all happened so fast. As I silently climbed a hill, I saw the shiny fur of a black bear's hind end. Like yesterday, he loped easily away from me through dense forest and almost immediately disappeared over some boulders. Since I didn't have K to worry about, I tried to get a better look at him but he had vanished without a sound or trace.

I checked a wildlife camera that I've had set up on a major bear corridor for months with NO visitors. This time, multiple bears had ambled past. Here's one photo. I'll share more of them tomorrow. I think that it's bear mating season when all the adults (except females with new cubs) are on the move looking for potential partners. 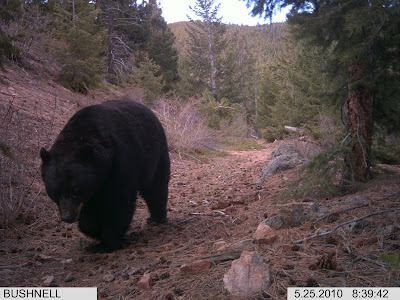 I arrived home, exhilarated by my streak of seeing bears THREE days in a row! And, I found that a visitor to our house had unknowingly let R out of his crate and left him loose with no one home for the first time in his life. He was a model citizen. I found him snuggled on the bed with his head resting on my running shoe. What a good dog! 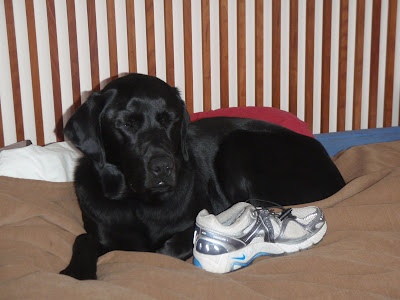 Here's to spring time and dogs growing up! 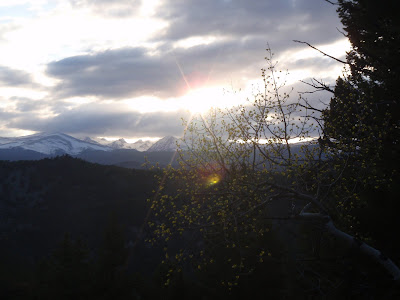