This morning, K and I hiked out together into the start of a winter storm. Clouds surrounded us but the sun barely glowed over the eastern hills. 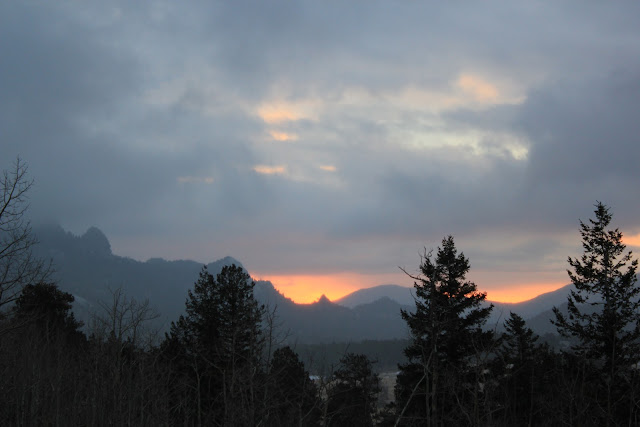 Yesterday, K's surgeon concluded that the lump on her paw is probably a pad of scar tissue that is forming between the amputated end of her paw bone (metacarpal bone) and the skin. As he described what he thought was going on, I visualized something like an internal callus preventing her sawed off bone from poking the skin on the top of her paw.

Because so many unexpected twists have occurred since the paw odyssey started in September, I now tend to expect bad news at vet appointments. I was so glad to be pleasantly surprised!

The surgeon's opinion is that we should stop the antibiotics in a week and then watch carefully to see if the bone infection recurs. I'm very good at "watching carefully" :)

In the meantime, I'm supposed to ramp up her exercise even more. The surgeon was very impressed with how strong K's paw muscles have become since that nasty cast was removed. I think that we'll do an extra hike in our fresh snow this afternoon!

As the snow started to fly this morning so did K! And, I didn't even hold my breath with worry! 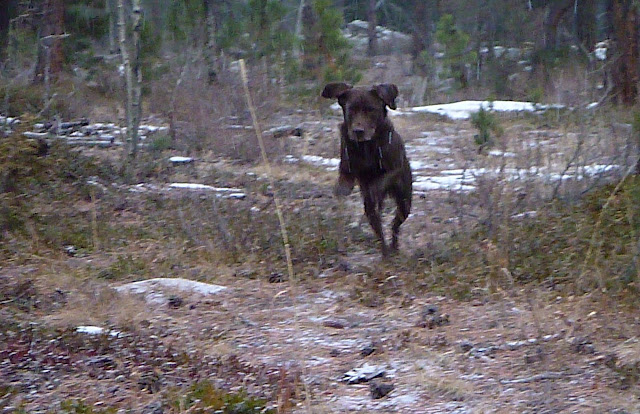 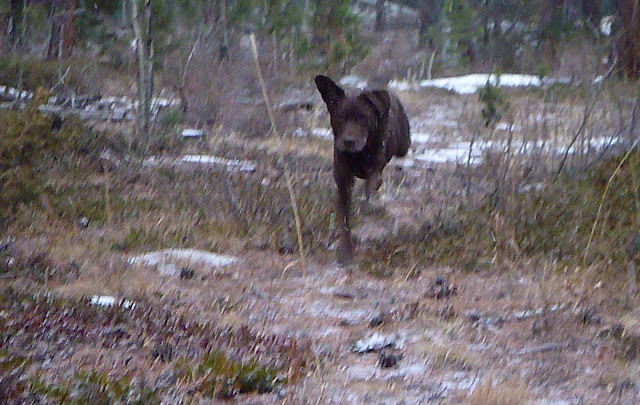 I had my camera out when she chose to leap onto a fallen tree rather than walk around it. The choice to leap was a sign of how good she's feeling. 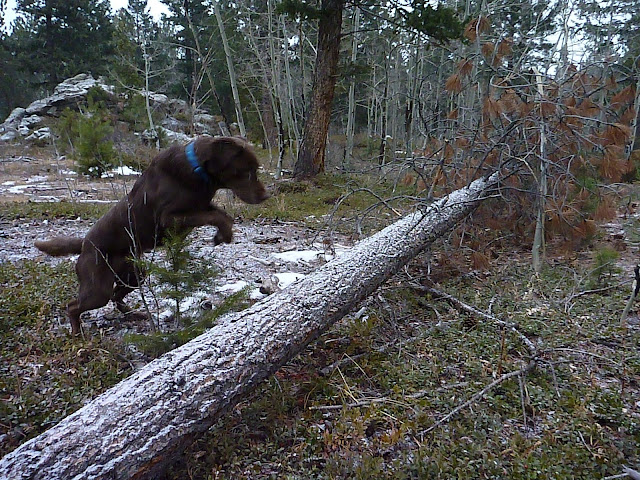 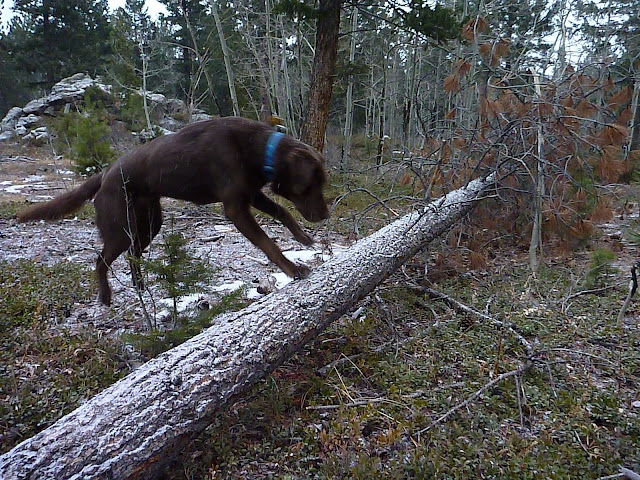 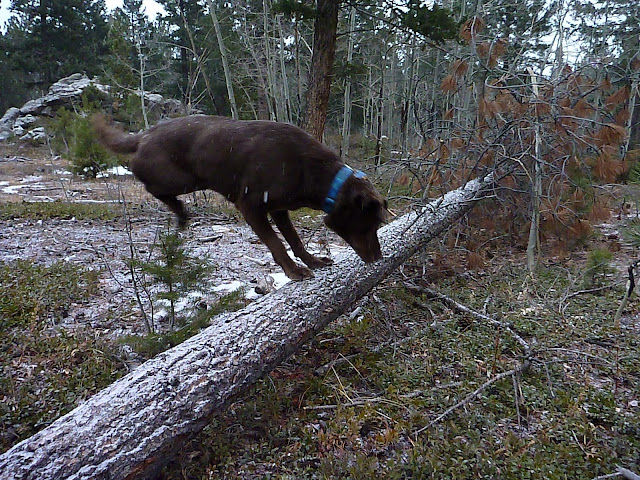 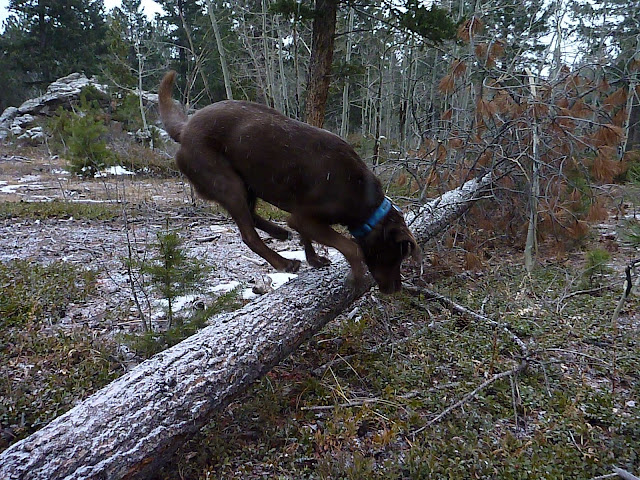 After our happy and mostly dry hike, I headed out to hit some of my favorite singletrack trails that I'm afraid will be shut down for the season by this storm. As I started my mountain bike ride, a snowflake fluttered out of the sky every now and then. However, near the middle of my ride, it turned into an intense storm with wind-blown snow stinging my eyes as it snaked its way behind my riding glasses. 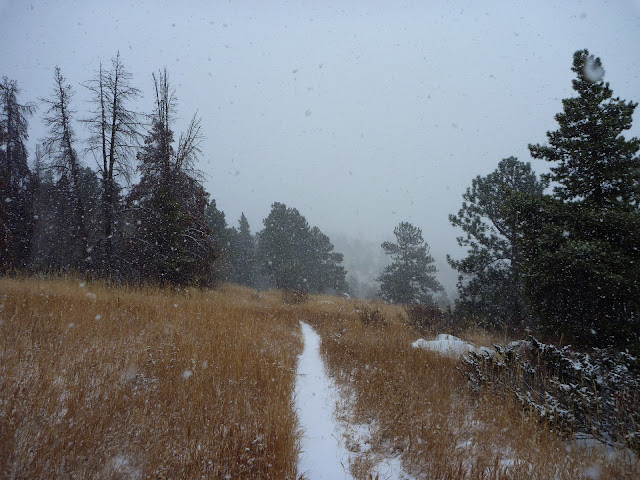 Silence fell on the hills. The muffling effect of the snowstorm gave me the sensation of pedaling along in a cocoon, with little visibility in any direction and no sounds reaching my ears except the patter of snowflakes hitting my helmet. 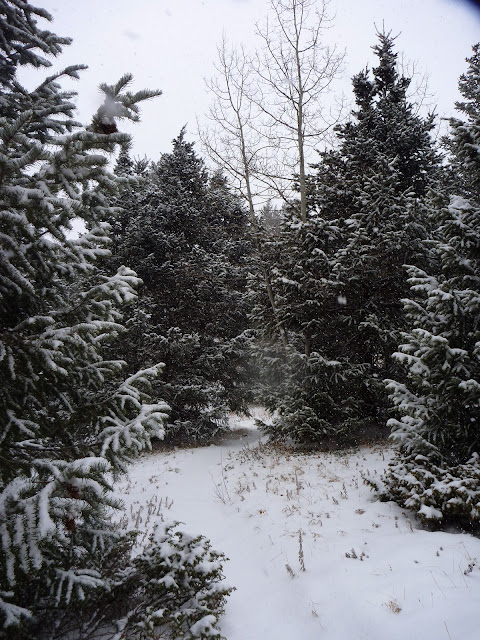 Over my ride, snow transformed our world. The boulder-strewn landscape below was almost bare of snow during my hike this morning with K. By the end of my ride, it looked like a garden of rock and snow sculptures. 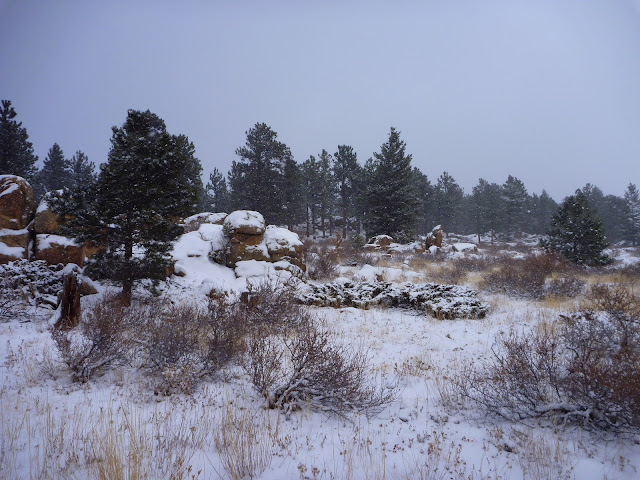 Several of you asked about my new camera - it's a Canon Rebel t2i. So far, I love it! However, I also love my old camera, a bomb-proof, waterproof, freeze-proof, and KB-proof Lumix point-and-shoot. I was afraid of whether the snow would hurt my new Canon this morning so I used the Lumix for all the photos in this post except the sunrise.
Posted by KB at 3:51 PM