The healing power of canines and nature

It was a day when I desperately needed my time moving through the forest to try to make my spine feel better. It all started two days ago with worse-than-usual pinpoint pain in my neck vertebrae. Then, the muscles around my neck started clamping down to try to splint the angry joint. Finally, by last night, the neck muscle pain was radiating up into my head. I was beyond my threshold. I took my emergency medicines and went to bed.

That’s pretty rare for me these days. I have a finely tuned routine to keep the pain mentally manageable. Most days, it works.

I woke up this morning a little better but still grumpy about the piercing pain. Leading chronic pain researchers say that the most promising frontier in managing pain is the mind. I can attest to that statement – I believe that it’s not the pain itself that matters but rather how I react to it. So, against my instinct to curl up in a dark place, I trudged out into the world for my hike with K. I focused on my world – chocolate K, nature’s beauty, and the signs of animal activity rather than the physical sensation of pain. 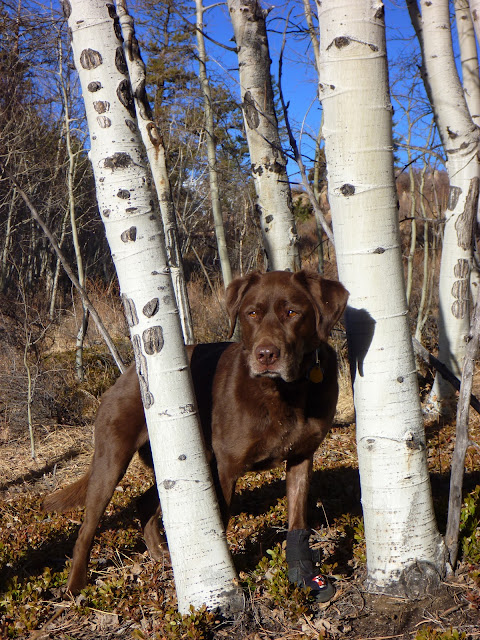 About halfway through our walk as we wended through a labyrinth of boulders, I realized that I was loosening up. Pain’s assault had waned slightly. That was good. 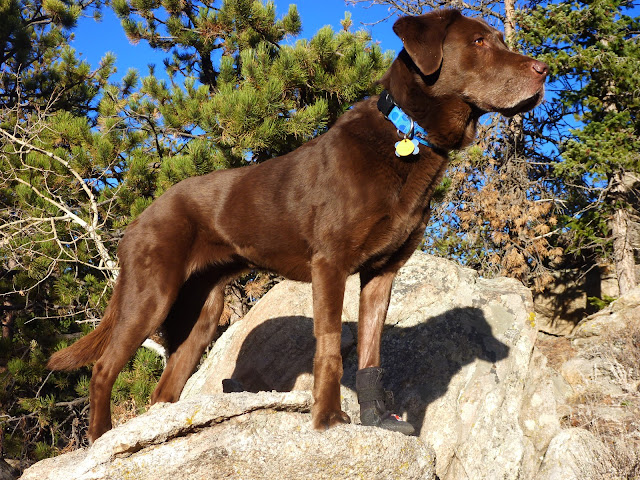 Sometimes, it really does feel like pain has chosen me as its punching bag and is zeroing in on destroying my sanity. I know that’s not true but that thought gives me a battle to fight rather than an excuse to be a victim.

Today, part of fighting the battle was seeking out those sacred places where K and I love to hike together, on the edge of a ravine with stunning views of the mountains. 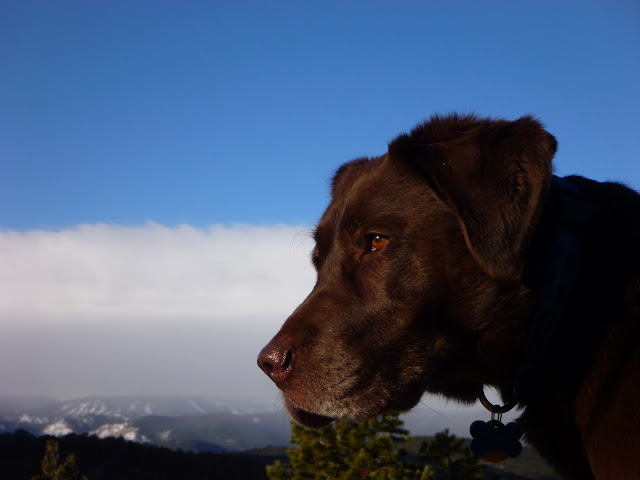 K is moving more gracefully each day, easily scaling the sculpted boulders left behind by retreating glaciers. Watching her makes me smile, especially when she's silhouetted against an infinitely deep blue sky. 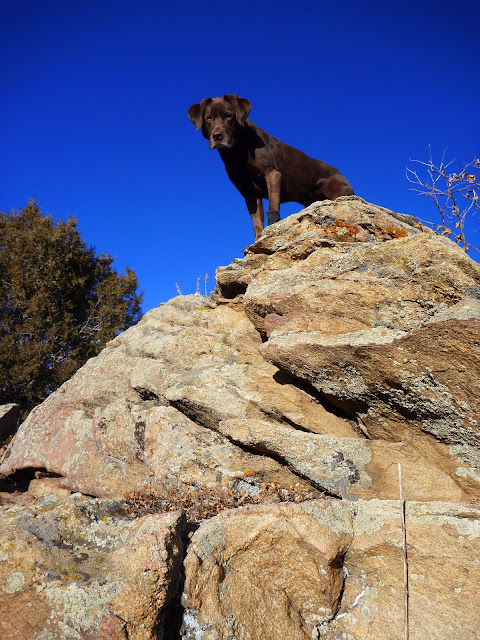 Today, I dropped K off at home after she'd reached her walking quota, and I picked up R for a mountain bike ride. That boy can distract anyone from their pain. His energy is supersonic.

He leaped, tucking his paws up under his body. 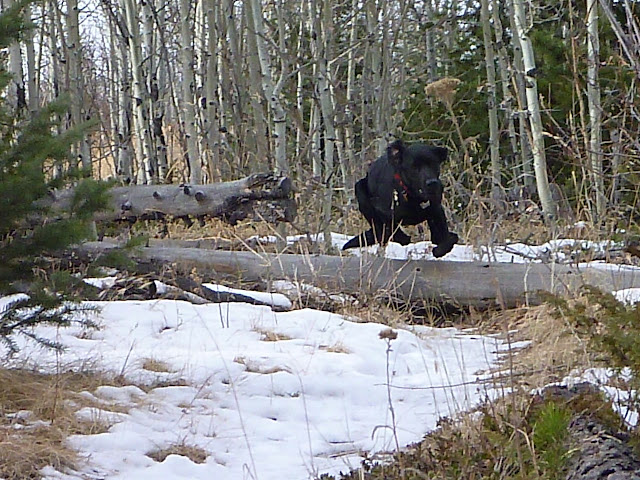 And prepared for landing... 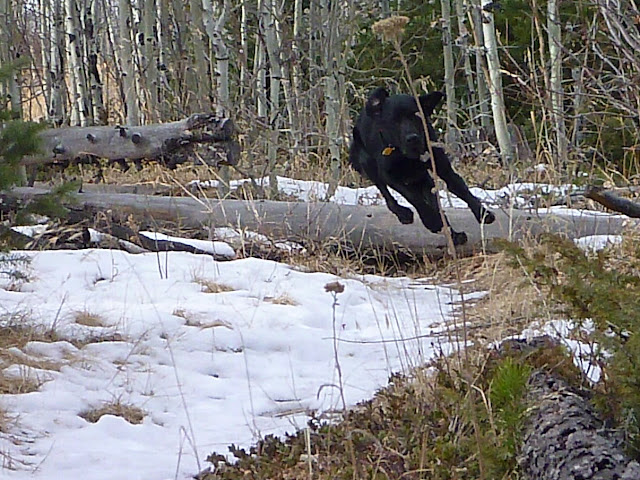 Despite his natural inclination for zoomies and comical antics, he’s still improving during our mini-training sessions that focus on calm behavior out on the trail. Here, he did a sit-stay next to my “ice” bike, equipped with studded tires. 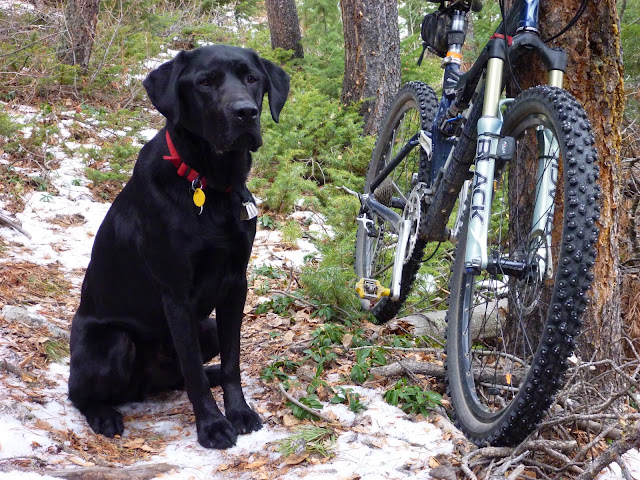 At the end of my very short ride with R, I knew that I needed more movement to break apart the muscle spasms. I headed out for an exploratory ride, trying yet again to link together two disparate trails with miles of empty land between them. Today, I was successful. I found a faint trail built by a kindred spirit a long time ago and made the linkage! 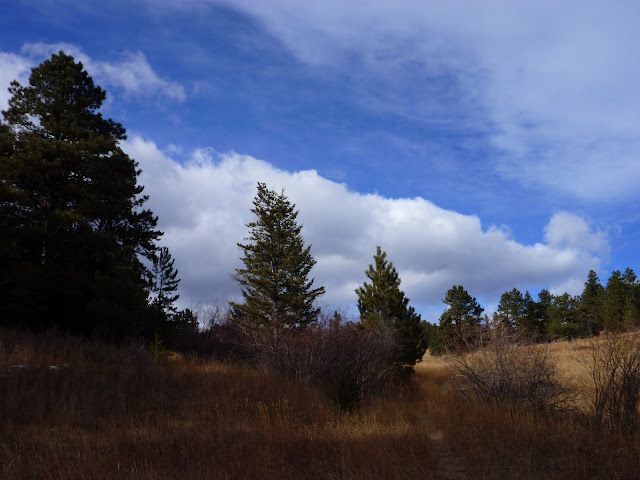 I didn’t see another person during my entire ride although, at times, I felt like mountain lion eyes were boring into the back of my bike helmet. The terrain was a jumble of house-sized boulders, pine trees, and grass lands. As the feeling that I was being watched started dominating my mind, I spotted this territorial scrape left by the humongous hind paws of a mountain lion. My foot is oriented the same way as the lion's paws were when he made the scrape and gives a sense of scale. 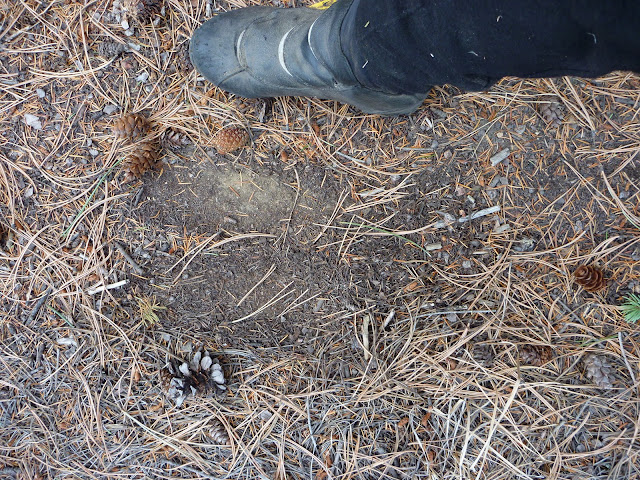 A short time later, I spotted a pair of young mule deer bucks gazing steadily over their shoulders. Maybe they felt the lion eyes like I did. 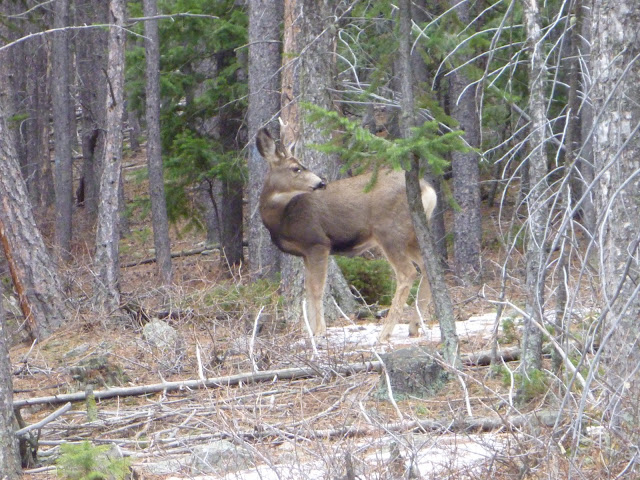 It was another day when time with my dogs and out in nature helped my body and spirit immensely. My physical therapist recently asked me what advice I'd give her chronic pain patients to help them re-find their love of life. The best advice that I could summon on the spot was that they needed to identify what they love doing and somehow do it despite their ailments. For me, that’s being with my dogs and exploring nature.

Oh yes - I think that my inspirational bobcat who visited our clearing at 4 AM would agree. 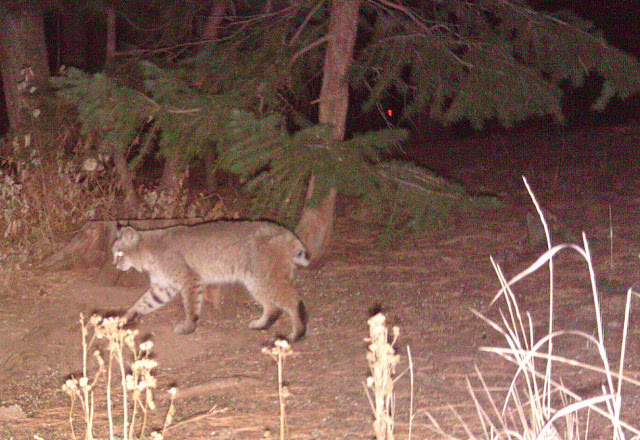