Bobcat, deer, and our beautiful world

My luck seems to be turning at my wildlife cameras. A bobcat padded softly past one late yesterday morning. The tree that he was closest to in the photo below is a scent post that he chose not to mark yesterday. 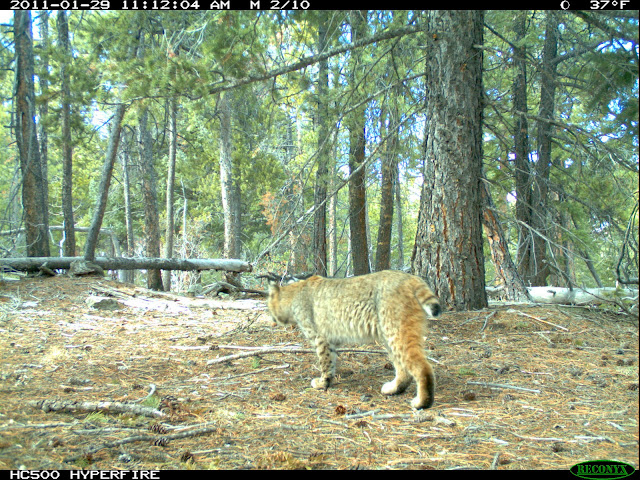 But, he did seem to consider marking it. As he passed it, he paused and gazed at it. Perhaps he could tell that he was the last one to mark it so there was no need to "refresh" the scent. 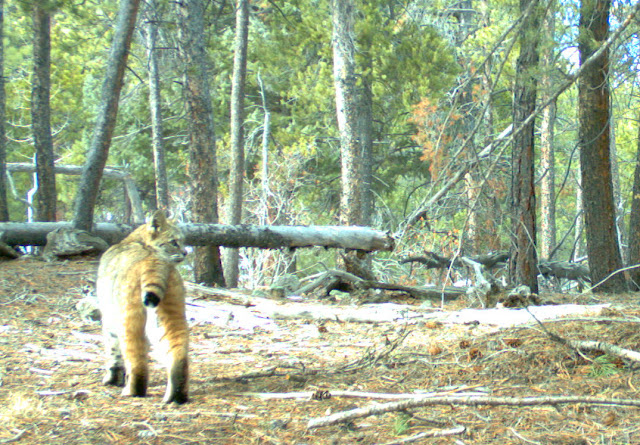 Mule deer are renowned for the size of their ears and the telescoping motion that lets them orient their ears in whatever direction they choose. One of the does demonstrated this perfectly. First, the doe in the foreground listened to world in front of her. 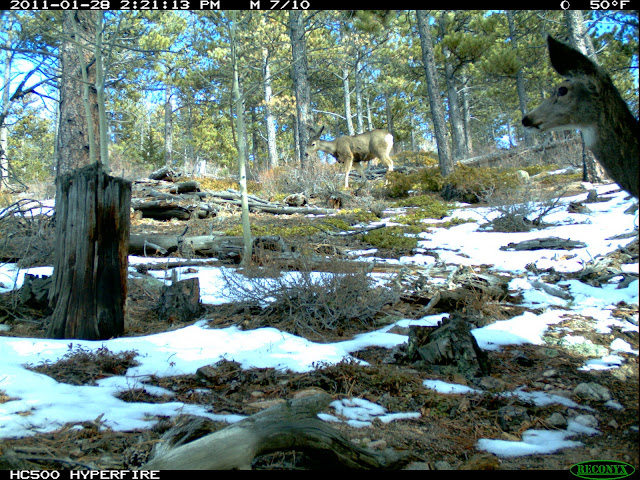 Then one ear monitored behind her while the other monitored in front of her. 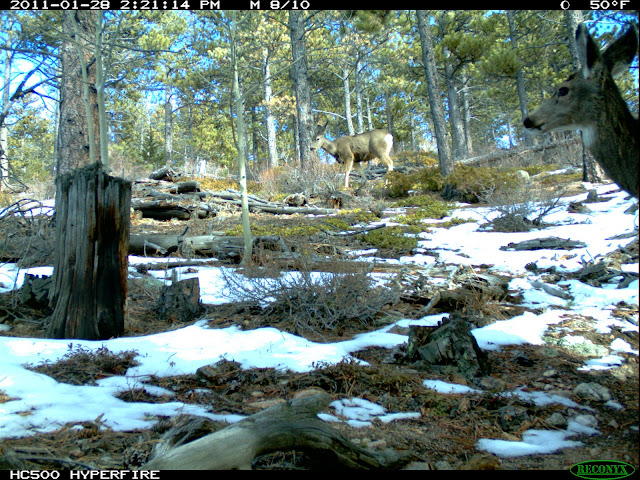 Finally, both ears pointed backward, alert for an ambush. 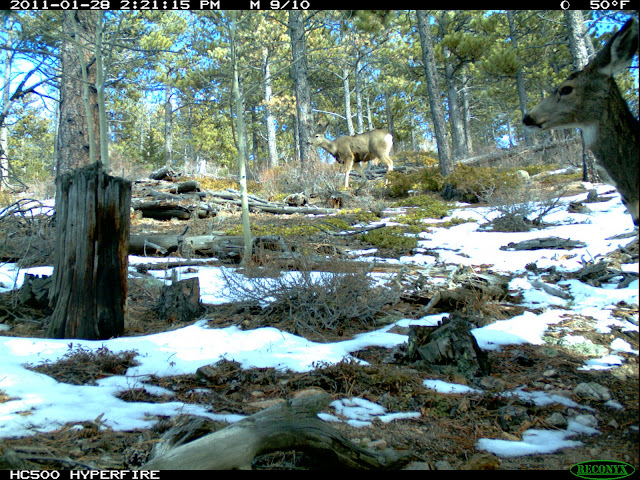 The second doe who passed the camera with her fawn carefully sniffed a stump that I thought might be an animal marking post based on tracks at its base, scuffing of the wood, and fur stuck in the splintered wood (as if an animal has rubbed against it). Based on the doe's interest, I might be right. We shall see if any animals mark it while my camera is in this spot. 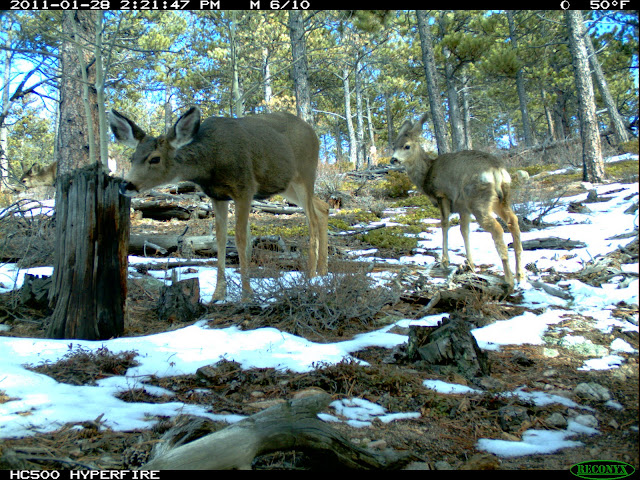 Today, K and I were up and ready to go easily in time for sunrise, a surprise after a tiring and long day yesterday. 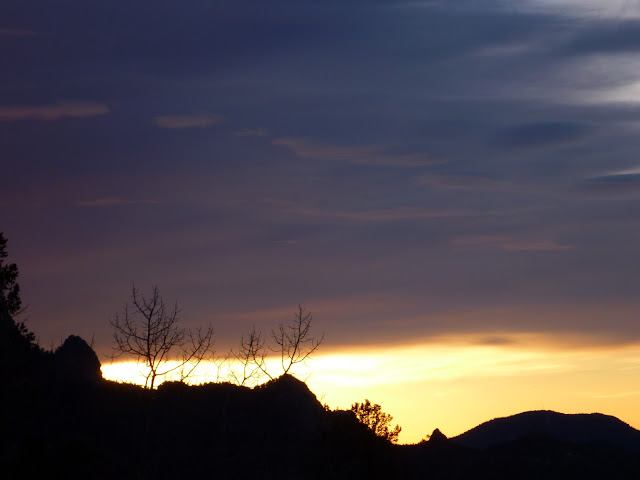 This morning's sunrise started dark and then grew brighter and more psychedelic. 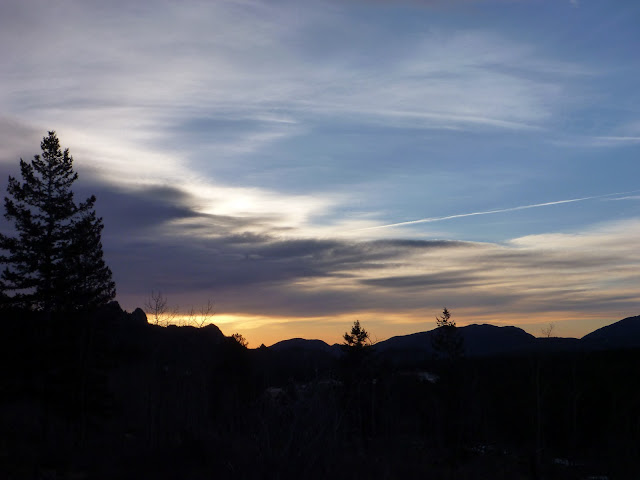 Due to low clouds on the eastern horizon, the world became bright later than usual. Once the sun peeked over the clouds, I reveled in the bright blue sky and warm air while K obsessed over the elk scent wafting from our west. A bevy of elk spread out over a meadow, nibbling the dry grass. 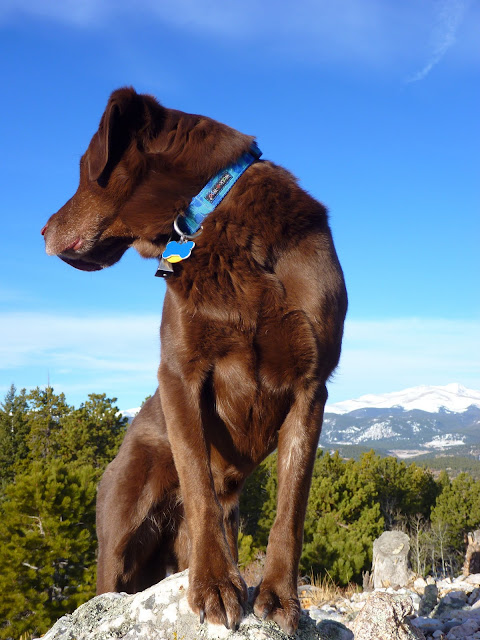 In the afternoon, our pack clown, R, decided that it was time for a hike hours earlier than usual. He paraded around the house carrying my lumbar pack which I usually wear for hiking. When we took that away from him, he countersurfed and trotted off with a Netflix DVD with plans to gnaw on it (he's done it in the past). Next was some paper recycling that he shredded for us. We finally got him focused on a dog toy so that we could delay our sunset hike until sunset. I'm beginning to think that the boy isn't ever going to grow up - and I love it! 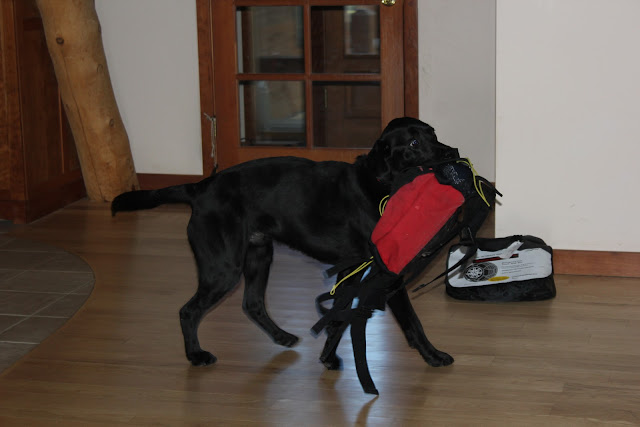 When we *finally* headed out to hike, R was full of zany energy (surprise, surprise!). 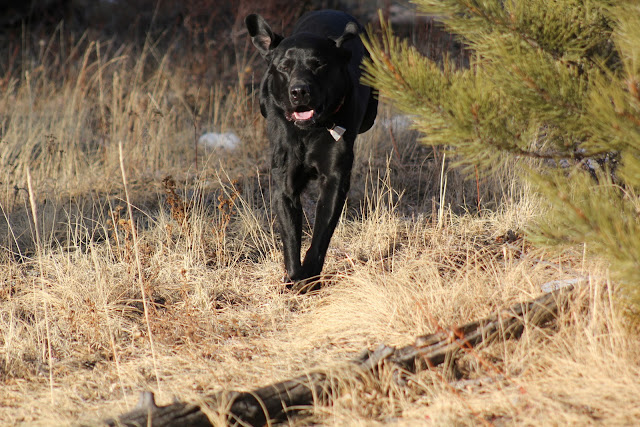 During our hike, we explored some boulder outcroppings for the very first time. We've never before had access to the boulders or the expansive meadow that they adorn because an audacious landowner fenced in a huge area and claimed to own it. The truth has now emerged that the resident owned only a small fraction of the fenced area, and the people (and dogs) are taking back their national forest! I should be more shocked by the whole fiasco - but mountain people can be crazy.

The Duo examined the gaps between the lichen-covered boulders with exquisite care. 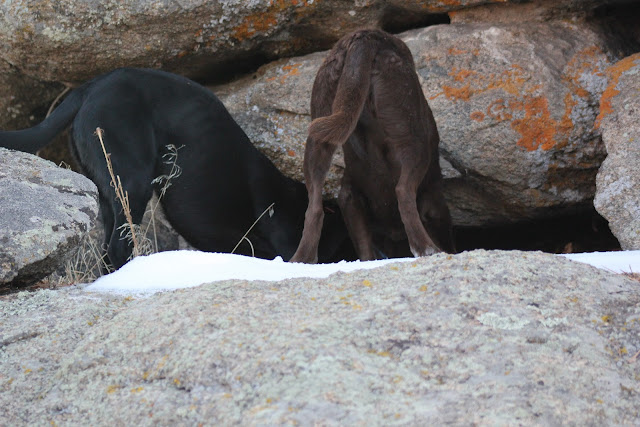 The Duo didn't get stuck under the boulder... although I was worrying as they slithered further and further into the crevice. We enjoyed a long and warm hike. Unbelievably warm weather has taken hold here, ever so briefly. After temperatures in the 40's for the past couple of days, Tuesday's temperature is projected to bottom out at -17°F and reach a scorching -8°F during the day. That'll make for some Michelin Woman days...

For now, we'll enjoy the warmth and the hint of spring in the air! 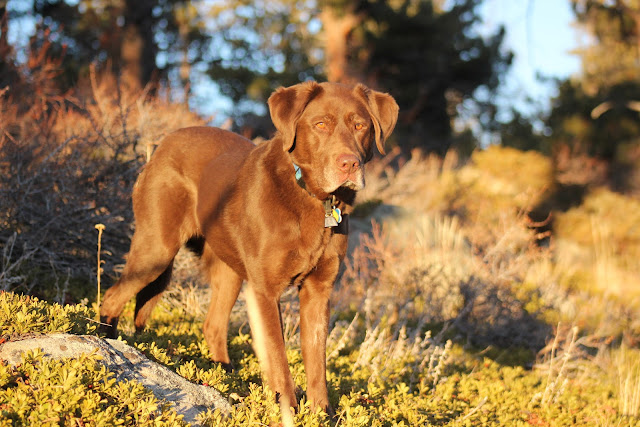