A tale of two worlds

Making it onto the trails in time for sunrise motivates me every morning. But, it's getting harder. Sunrise is ratcheting one minute earlier each day right now. I pedaled like a fiend this morning, and K and I barely made it up high in time for the show. 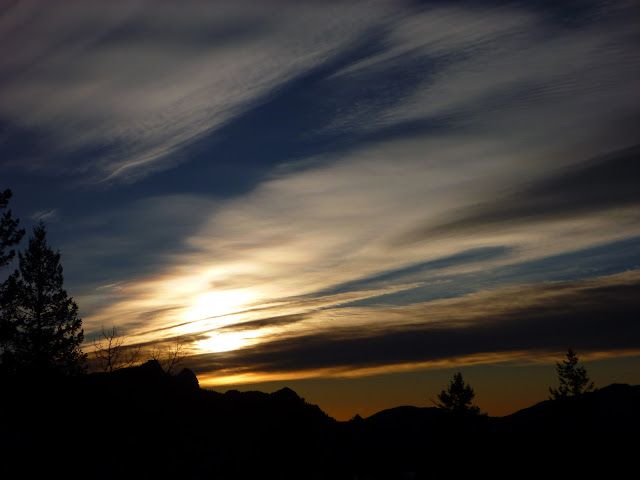 After sitting together in the complete silence enjoying sunrise, we headed up even higher, where the crystal clear topaz skies with snowy mountains on the horizon wowed me again. 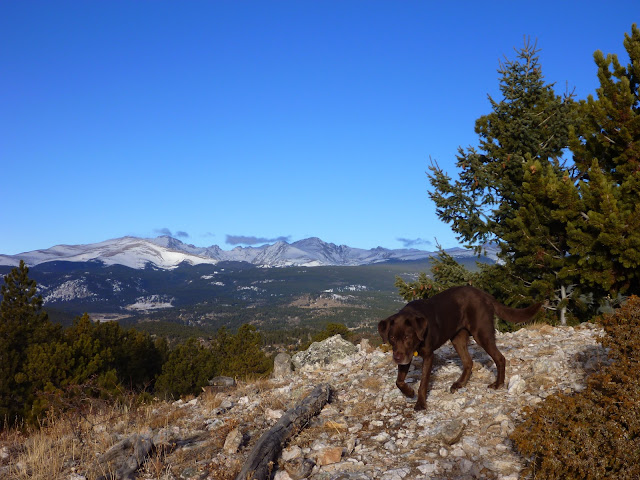 K was full of vigor, ready to gallop hard the whole way. Alas, I think that it's good that snowbiking is *slow*. It's so hard to push tires through snow that I feel like a slug most days. I think that's good for K because she's forced to travel at my slow pace while she continues to get stronger.

On our ride, I finally spotted a classic "K track". If you see a track like this, you know who made it! 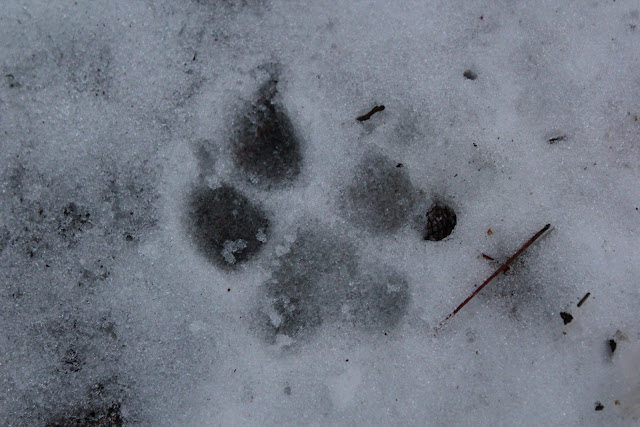 After I rode with K, I headed out solo on my snow bike, visiting an area that I've eschewed because of my fear of the snow depth on the return leg of the loop. As I rode up the south side of a ridge, I mentally ridiculed myself for worrying because the hillside was almost completely clear of snow. I became convinced that snow depth would not be an issue on this ride. 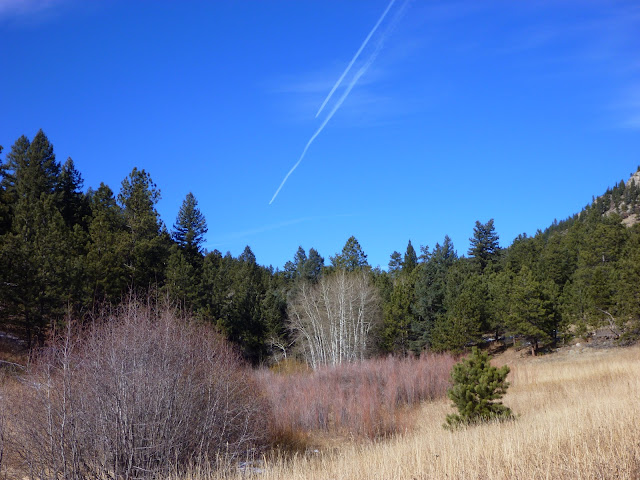 I surveyed the views from the top of the ridge and then hopped on my bike to descend the ridge's north side. Oh my. The snow was nearly knee deep in the shadiest areas. No other humans had traveled on the trail this winter so it wasn't packed down the slightest bit.

However, two mountain lions had hunted along the trail some time in the past few days. They walked steadily in some sections, and then they'd explore side gulches or hillsides before returning to the trail. I'm guessing that these tracks were left by a mother and a large kitten. 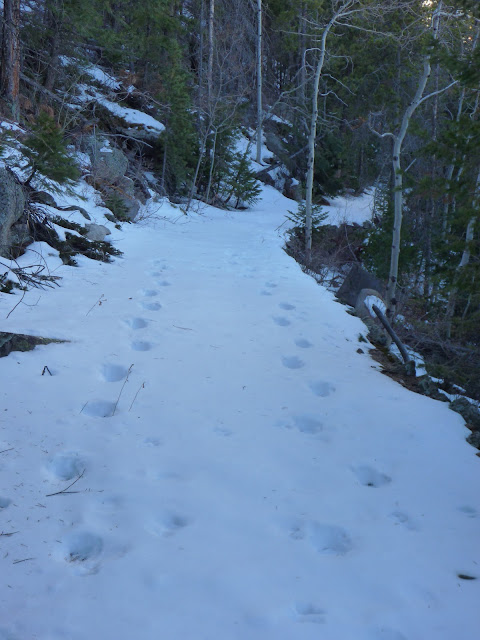 My "easy" ride took a turn toward an "epic" ride, as I struggled to propel my 4" wide tires through heavy wet snow. I was exhausted beyond words, stopping to feel sorry for myself every 15 minutes or so. I ate extra food and drank extra water but it didn't increase my horsepower.

Eventually, I made it home but it was a mighty battle. I must admit, however, that I love having only myself to depend on when I'm out in the wilderness. Even if I'd had cell phone reception (ha!), no one could have driven to my remote location to save me. I was on my own.

Fortunately, food and rest replenished my muscles. The whole pack took an evening hike, enjoying every minute of the inexorably lengthening day.

It was another tale of two worlds. Out in a sunny meadow, the Duo frolicked in tall golden grass. 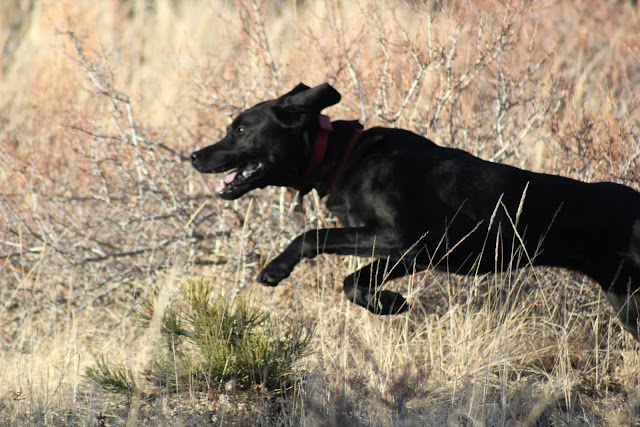 As the sun sank lower the sky, the world took on its dawn and dusk glow as the Duo raced each other. 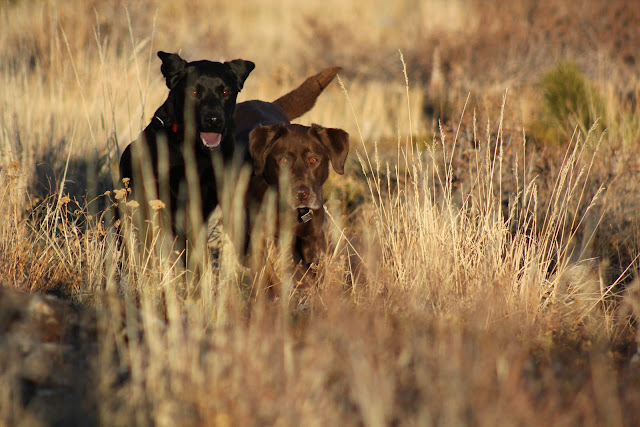 Then, a two headed dog appeared on a boulder, one head black and the other chocolate. 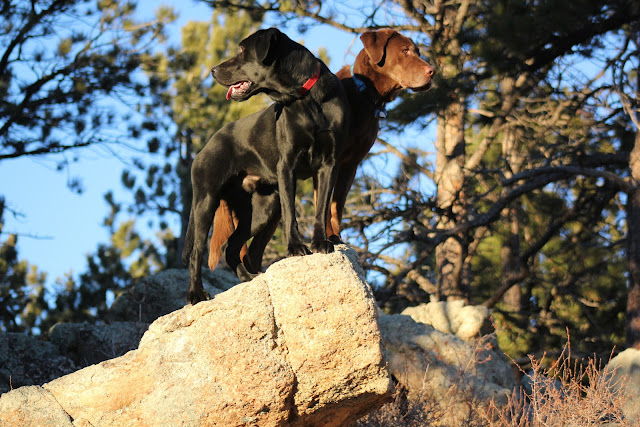 Before long, we descended toward a shady and snowy forest. Out of the warm sun, the dogs started romping with a frantic intensity that surprised me. I have not seen K run so fast since early last summer. 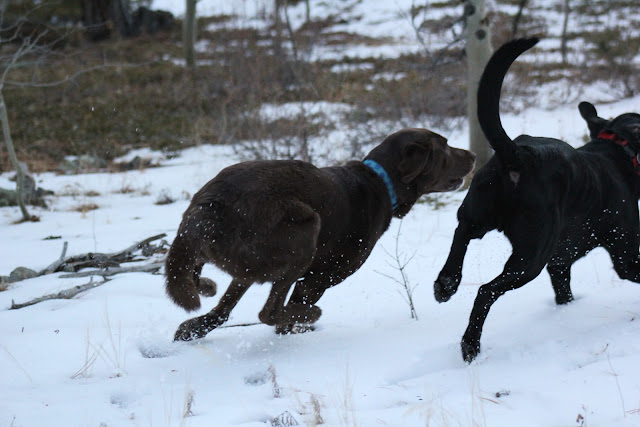 R lured her with a long stick, hanging it out to the side to convince her to chase him. 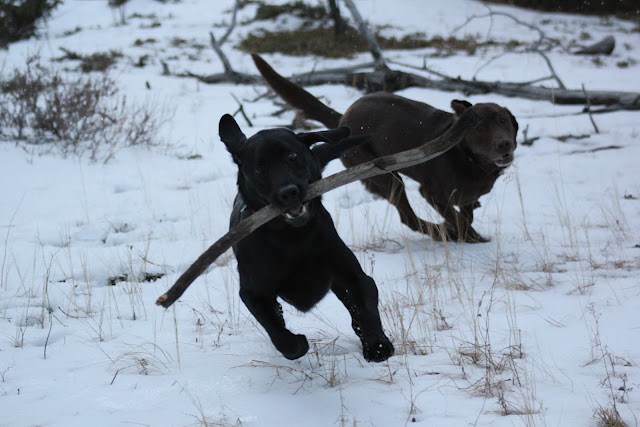 Soon, K caught him, and clamped her jaws on the stick. Victory for the recovering underdog! 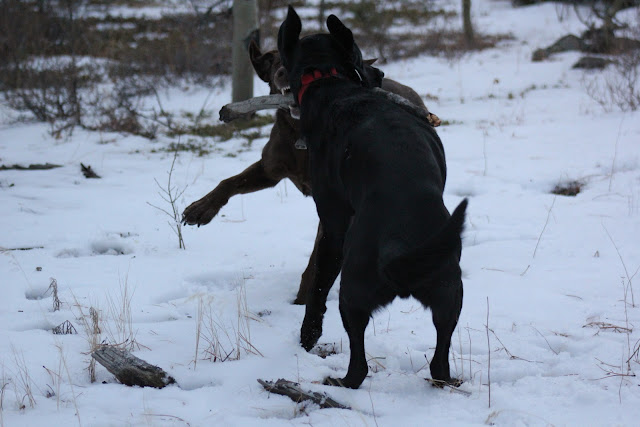