It's becoming our tradition - K and I started the day by hiking up to see the sun rise. Today, we were a tiny bit late, and the sun didn't wait for us. 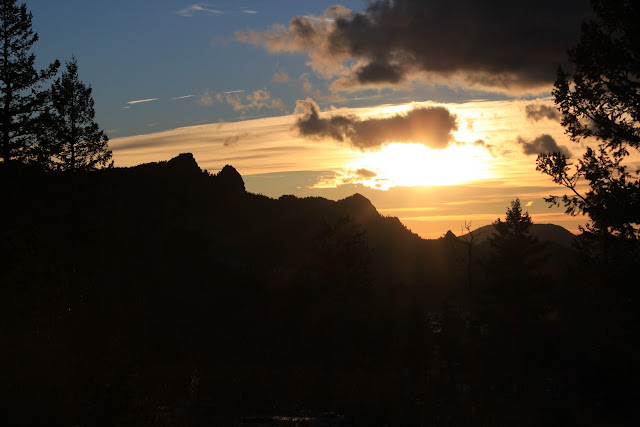 Another glorious start to a winter day... 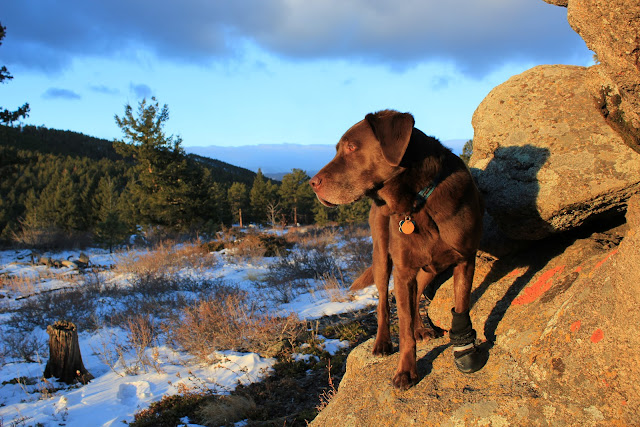 After I took K's photo, I looked back to the east and the picture had changed dramatically in the blink of an eye - wild black clouds drifted in front of the sun. 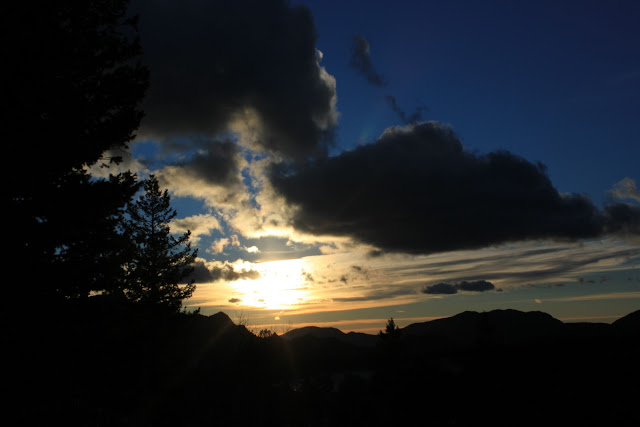 After lingering to enjoy the sunrise, we started hiking upward, through a maze of boulders and pine trees all surrounded by snow. K seemed distracted. Something in the forest that I couldn't perceive had her attention. 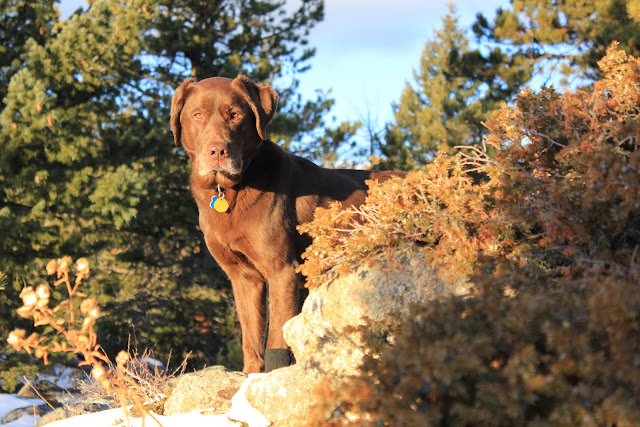 When I feel that K or R is focused on something other than me, I always stop and play the eye contact game. Here, K fixed her mesmerizing eyes on me but her ears were pinned back as she monitored sounds behind her. 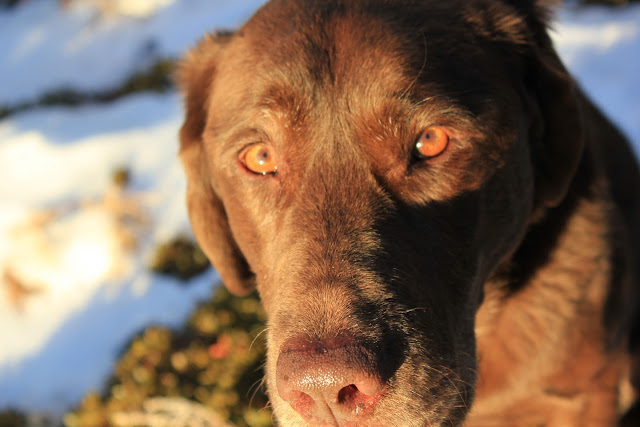 Within about 50 yards, I discovered what had K's attention. Last night, a mountain lion had traversed the broken meadow and forest yet again. 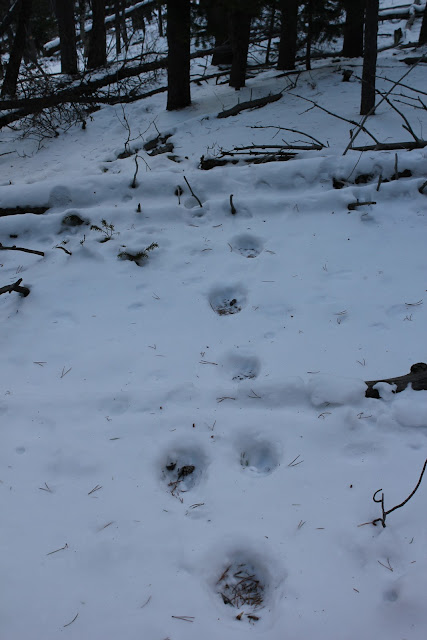 A closeup of one track showed it to be a smallish mountain lion, again. The size looks about the same as the tracks that I found two days ago and two weeks ago. I'm beginning to think that we have a female mountain lion who has young kittens stashed in our area. Females with kittens hunt a small area with fiendish intensity rather than cruising a huge area of up to 500 square miles like a male mountain lion normally does. That scenario would explain why I'm seeing these smallish tracks on such a regular basis. In the photo below, my chemical handwarmer is in the photo for scale and is 3.5" long. 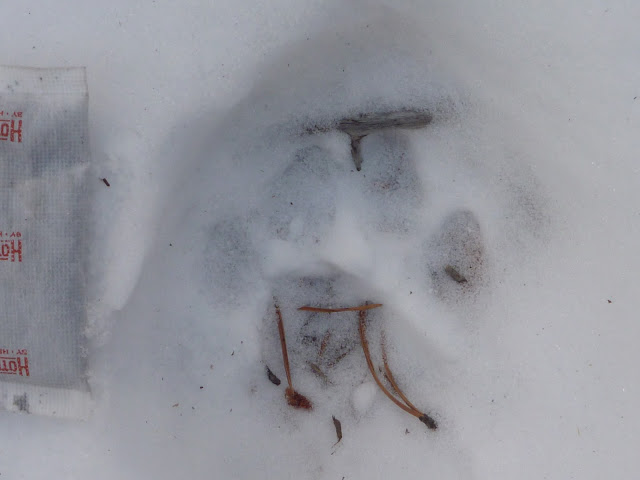 As we tracked the cat, I discovered one spot that she's passed in each of her recent excursions through our forest. Yes, you guessed correctly - there is now a wildlife camera posted at that spot - it's a saddle on a small ridge where the lion likes to cross the ridge. I hope to get her photo to honor the Year of the Mountain Lion.

Ann from Zoolatry kindly made a fabulous badge denoting the Year of the Mountain Lion. It's in the upper right corner of my sidebar and is free to be copied if you so wish. Thank you for sharing your amazing talents, Ann! 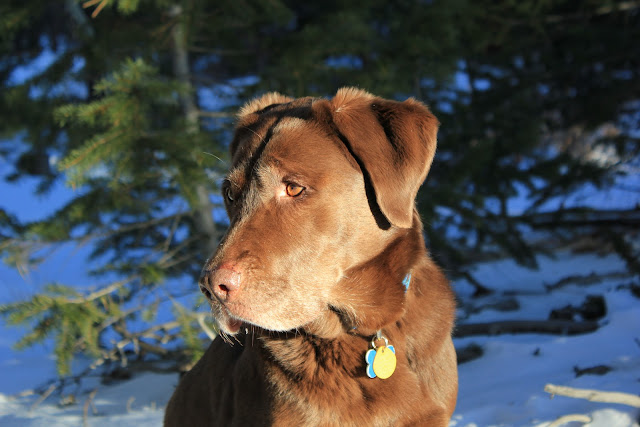 And, she enjoyed her ability to gallop through the snow. 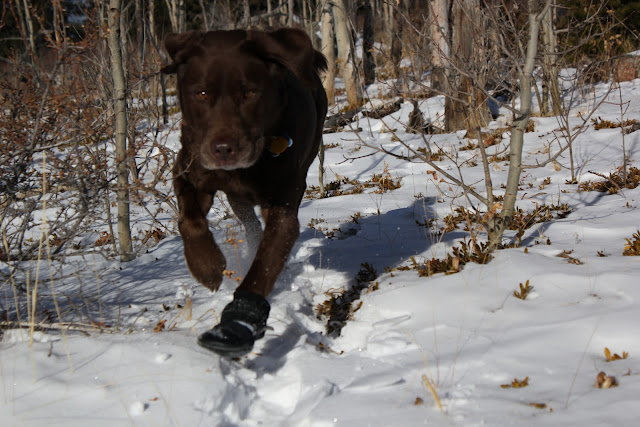 I left K at home at the end of our hike, and I headed out on my snowbike. I haven't mentioned it for the past couple of days because the snowbiking has been frustrating, to put it mildly. Ferocious winds hurled our snow into small drifts with a cement-like tough layer on top - a nearly impossible snowbiking situation. I repeatedly got stuck in the cement, unable to pedal strongly enough to break the windpacked snow. The snow was so tough that it held my bike upright all by itself. 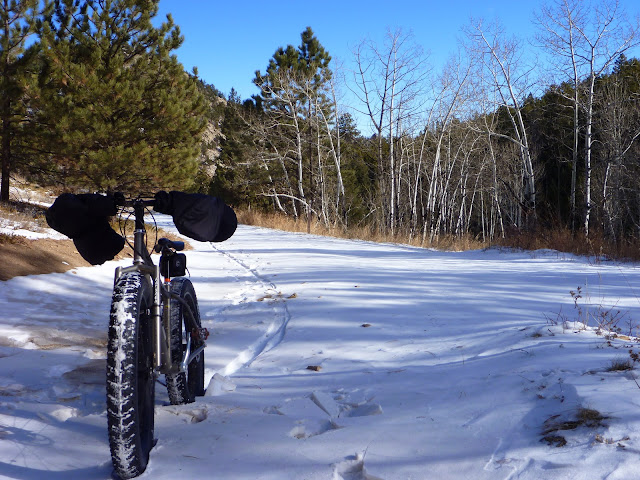 Today was different. I'm not sure why - but I could ride again. I pedaled nimbly up to Hug Hill where the skies beamed deep blue. Almost all the snow had been blown off of the peak and eastward toward Kansas. 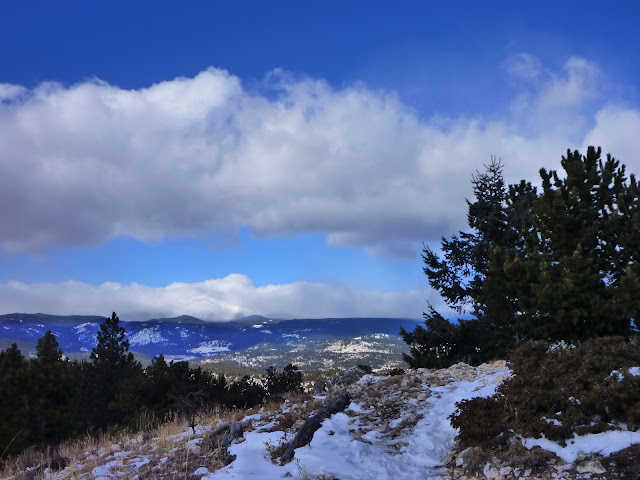 As I descended via a meadow, I heard the thundering of hooves and looked to the south to see a huge elk herd. As soon as I stopped moving, the elk stopped galloping downhill. Almost all eyes were on me. 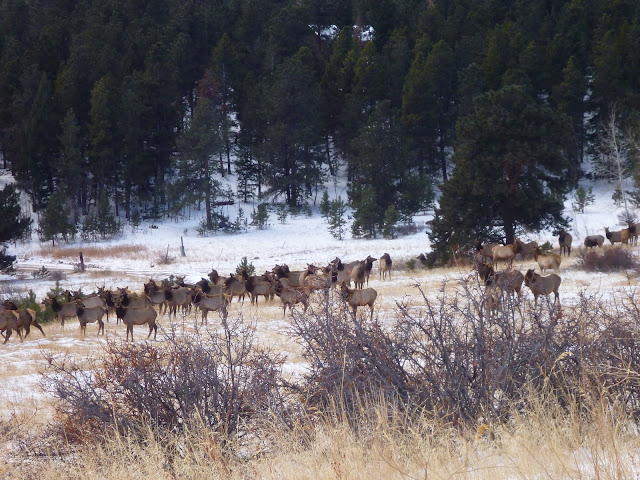 As I took photos, the herd started oozing forward again, spreading out into a long line with a few stragglers grazing absent-mindedly behind the moving herd.

The herd constantly moves, never grazing in one meadow for more than a couple of days in a row. An elder female leads the herd from one grazing site to another.

I had an extraordinarily hard ride, encountering sections of deep snow and fierce winds. But then, when I was ready to fall over from exhaustion, I'd hit a section like this one - a beautiful ribbon of trail stretching out westward, reaching for the Divide. 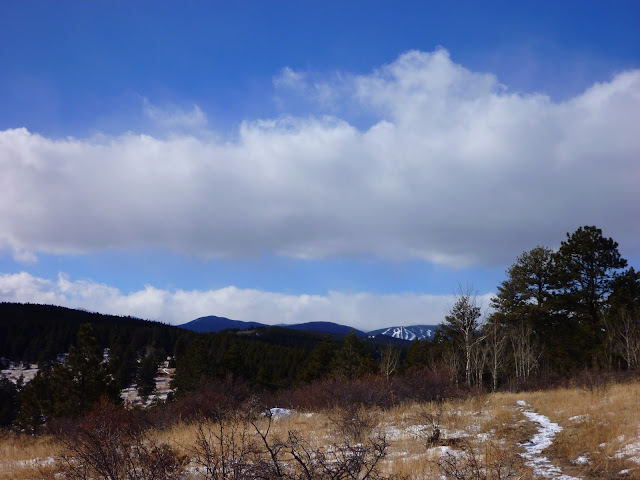 So often, the small battles that I fight in a mountain bike ride mimic real life. If I can slog through the tough parts and keep an optimistic spirit, I usually am rewarded with gleeful riding later. Such is life.
Posted by KB at 6:45 PM