Remember, yesterday, I talked all about how "our" mountain lion has me intrigued and I really want to get a photo of him. After writing that, the whole pack went out for a hike and the pups romped in the frigid air and feathery snow. 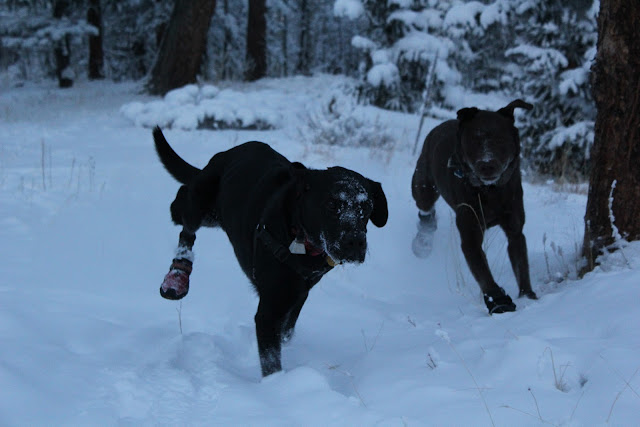 At almost exactly the same time, a mountain lion walked past one of my wildlife cameras. Notice the greenish tinge in his ear - that's an ear tag and tells us that this lion dons a tracking collar. He must be part of the local mountain lion study. 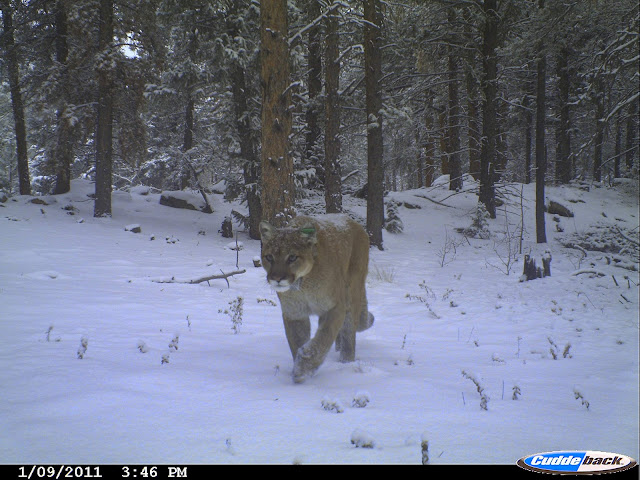 You can see the snow accumulated on his thick tawny fur, indicating that it was still snowing hard at that time. In fact, it kept snowing for hours, rendering his tracks unrecognizable. In the photo below, his tracks approached my camera set-up. If I hadn't captured a photo, I would not have known that these were mountain lion tracks. 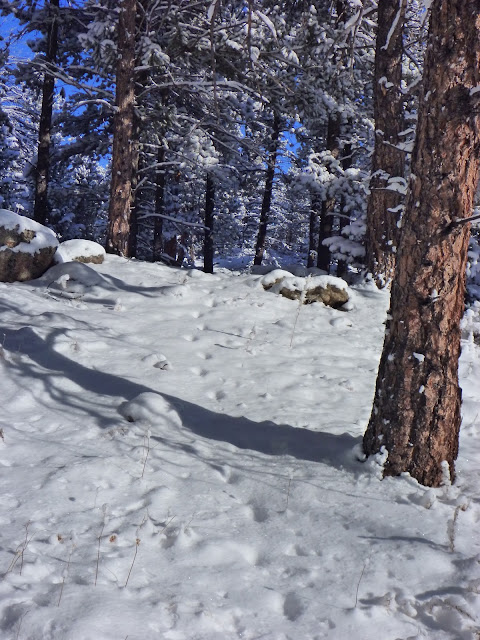 The pawprints were completely snowed in so I couldn't compare these tracks to the ones that I've been seeing frequently throughout our forest. However, this lion took strides of the same length as the lion who has been frequenting our forest (~40"). In contrast, this winter, I've measured a stride length of 52" for a huge male mountain lion, and a stride length of 35" for a smaller lion. So, the identical stride length suggests that this is the same lion as I've tracked so many times this winter.
Yesterday, I speculated that this lion might be a female with kittens in the area, keeping her tied down to a relatively small slice of the forest. However, an alternative idea occurred to me. Yesterday afternoon, the elk herd tromped through our meadow and spent the night nearby. I wonder if this lion is following the elk herd. The herd has stayed in a fairly small radius (5 miles or so) around my house so far this winter. If the lion were following the herd, he/she also would be in that same radius. Moreover, on Saturday, I saw lion tracks near where the entire elk herd had bedded down, and then I saw the lion tracks head toward my neck of the woods.
In any case, I whooped when I saw the mountain lion photo this morning. It's my first lion photo in the Year of the Mountain Lion!
K and I were treated to a stupendous sunrise this morning, as the storm clouds still hovered on our eastern horizon. It was -7°F when we headed out for our hike so we didn't linger long to enjoy it. 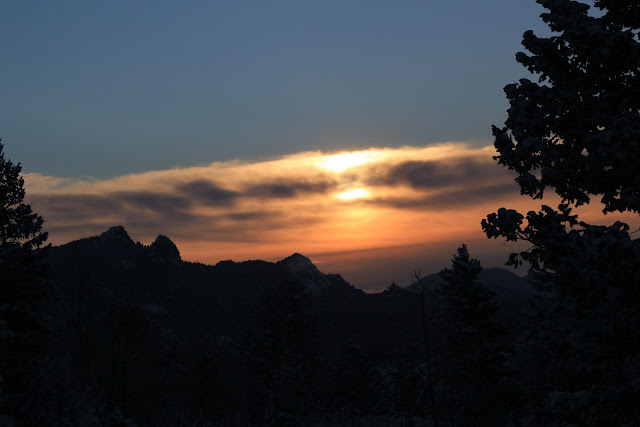 K's face, with snowflakes adorning it, lit up in the sunrise rays. 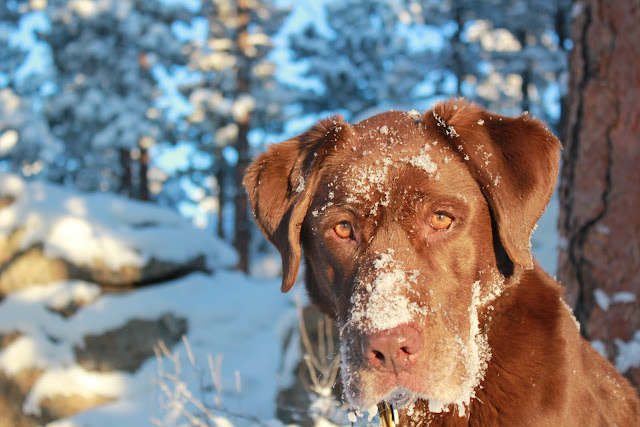 We both got chilled very fast despite the sunshine so K ran and I hiked fast, trying to generate some heat. K wore boots on all four paws due to the extreme cold. 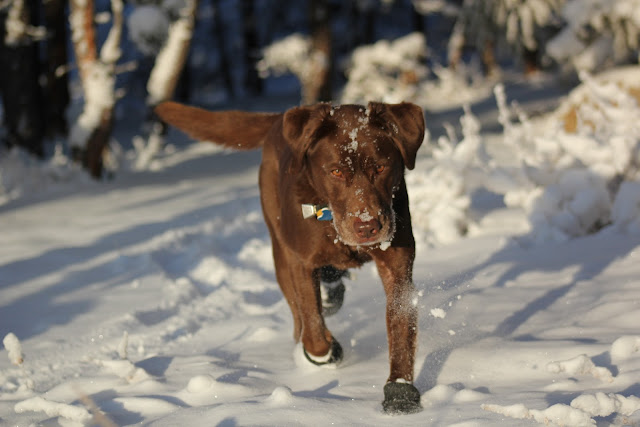 Then, she stopped in her tracks, sniffed furiously, and then sat and stared into the forest. I had no idea at the time that the divets in the snow that she had sniffed were mountain lion tracks. They were so indistinct that they could've been deer or even dog tracks. 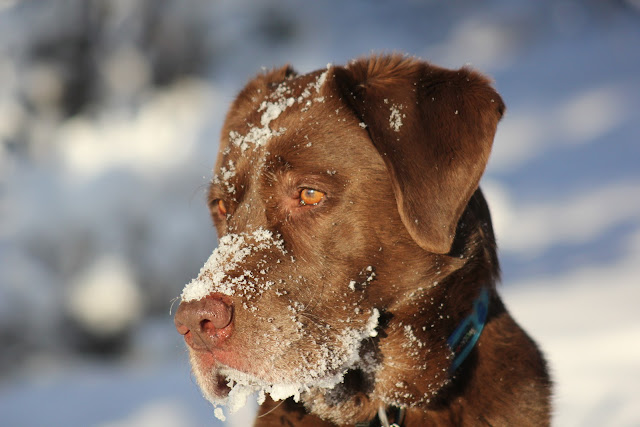 I finally leashed her to get her to hike with me again. We hiked up toward a ridge. On the ascent, only the tip tops of the trees were illuminated by the sun. 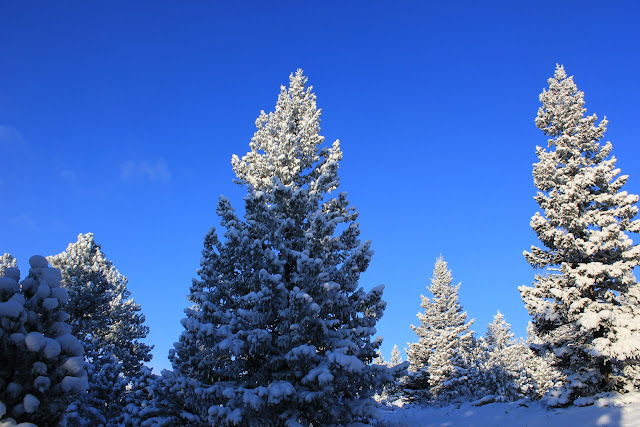 After I'd pulled her off the lion tracks, I released her again, and she trotted around like a supremely happy dog! 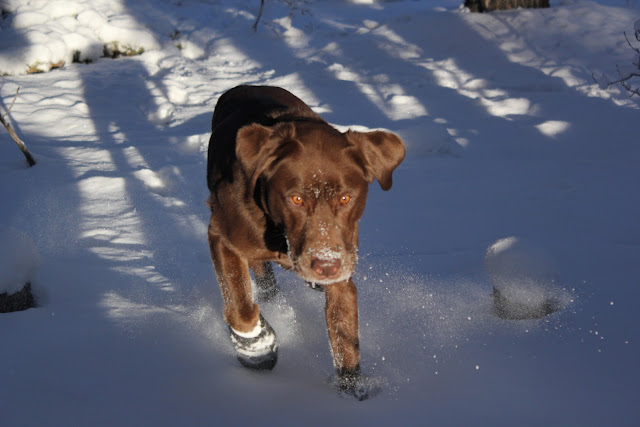 But, despite her boots, her paws started to get cold. She goes "on strike" when her toes are freezing. So, I leashed her again, and we hightailed it home. We passed through the meadow as we headed home, and the elk herd had departed already (usually they stay longer than 12 hours). I didn't yet know that a lion had been near them... but his stalking might explain their eagerness to move on.

After dropping K at home, I headed out on my snowbike. It had warmed to 0°F, and I was actually overdressed. I worked up a storm of heat under all my layers as I plowed through the fresh snow. I had a glorious time, seeing the world wake up as I pedaled through the forest. 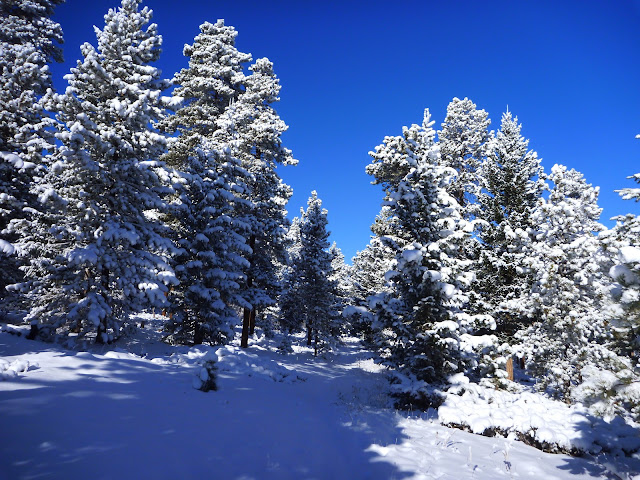 The deep blue sky behind the snow-laden pine trees awed me. And, the thought that a powerful mountain lion had walked so close to this spot yesterday afternoon gave me chills of amazement. What a world we live in!
Posted by KB at 4:15 PM