Before I talk about our desert trip, I must update you on all the crazy animal activity in our forest. It turns out that deer are even less smart than I previously thought. A band of six visited the spot where the huge mountain lion left his scent mark the other night. The deer visit was about 36 hours after the lion's visit, and the group seemed mesmerized by his scent, spending a long time sniffing it. 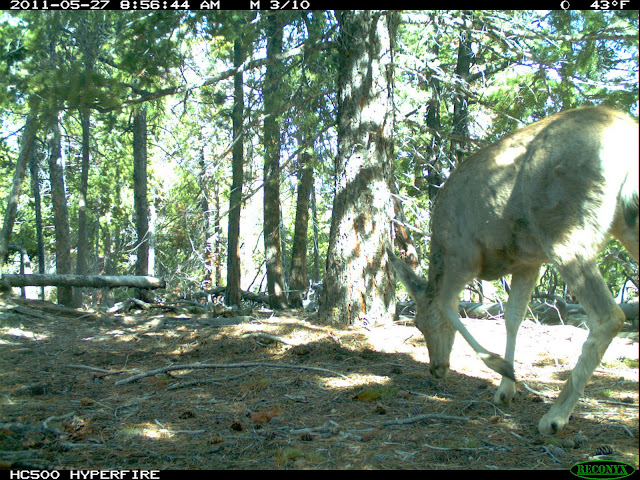 But soon there was a traffic jam of deer trying to get to the spot that the lion had scraped. 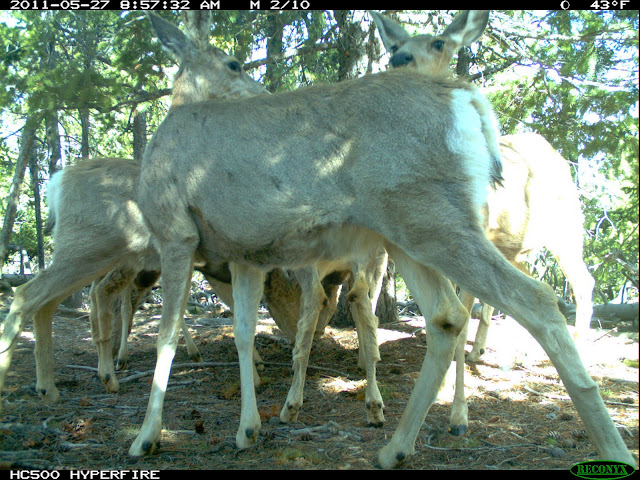 One of them posed for the camera. Soon they began to meander away but didn't seem even vaguely spooked by the lion's scent. 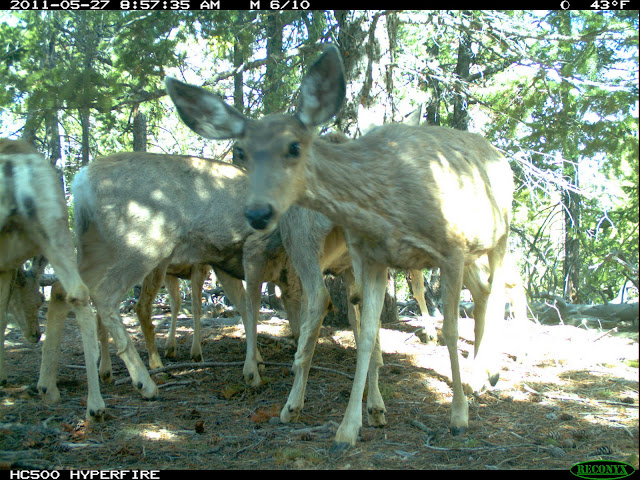 Indeed, one even lingered long after the others to continue to examine the spot. This looks like last year's fawn who still has a few lessons to learn from her elders. 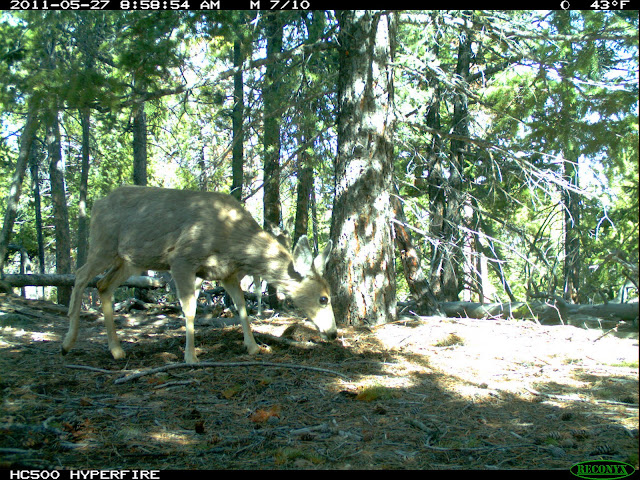 One of my remote wildlife cameras also captured very cute photos of a mother bear and her cubs in a remote part of the forest yesterday evening. I'll share those tomorrow. I love this time of year with all the wildlife activity!
______________
Back to the desert trip, we were in the San Rafael Swell, an area well known for its canyons. We found a canyon wide enough that we could comfortably walk it without having to lift the dogs over any obstacles or climb any huge boulders.

We started our hike at the top of the canyon where it was wide and sunny. The Duo looked funny as they both sampled a scent at the same instant. 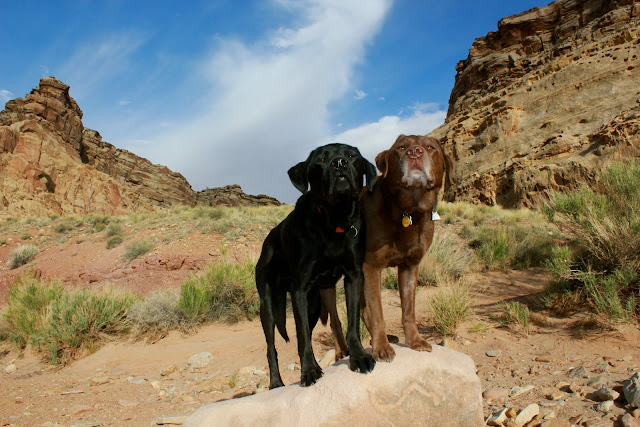 That raised snoot look emphasizes how gray K's muzzle became during her horrendous ordeal with the bone infection and toe amputation this past fall and winter. She's still beautiful to me but I hate seeing signs of her getting older.

As long as she keeps her chin down, the gray isn't so obvious! 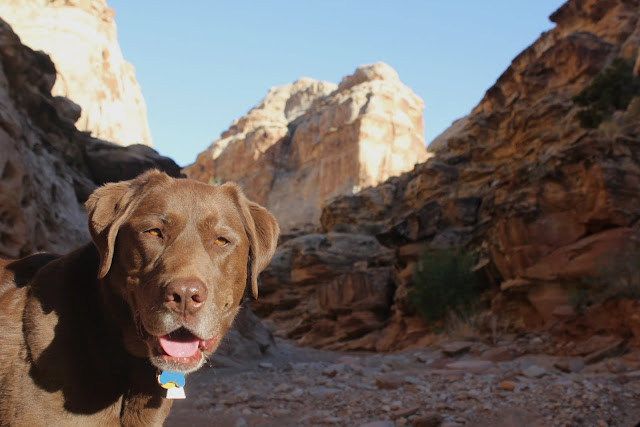 As we hiked down into the canyon, the walls cast looming shadows. 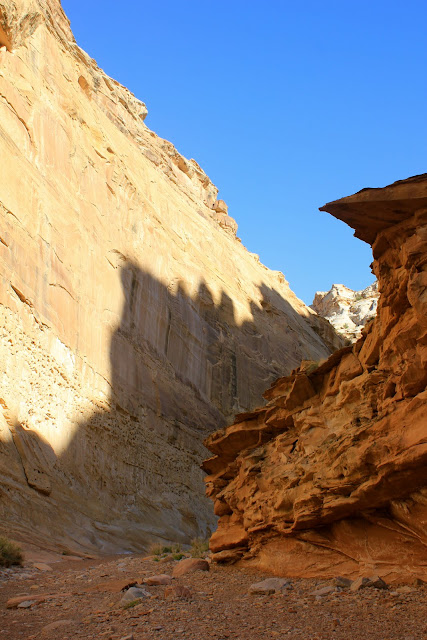 Rushing water of flash floods has polished the bases of the sandstone cliffs over eons. 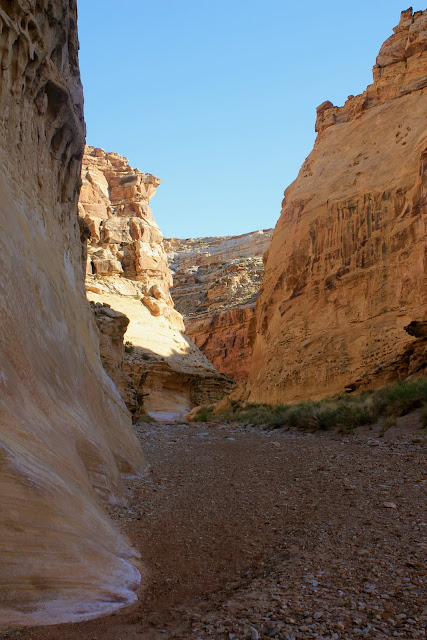 The canyon walls towered over us. Notice K at the base of the left wall in the next photo. She's a speck in the geological world. 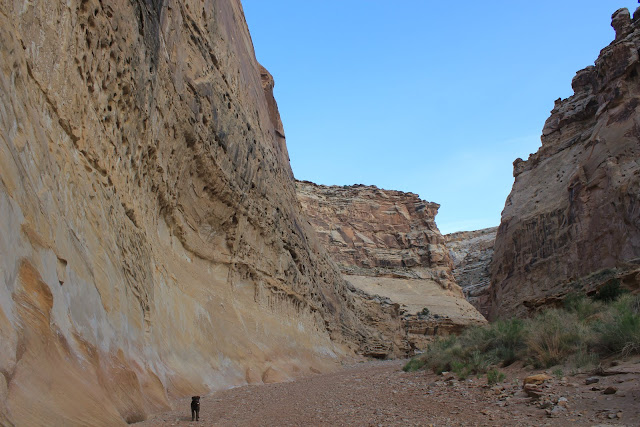 As the sun set, I found a spot where its rays spotlighted my K. I love how her fur glows in the sunset or sunrise light. 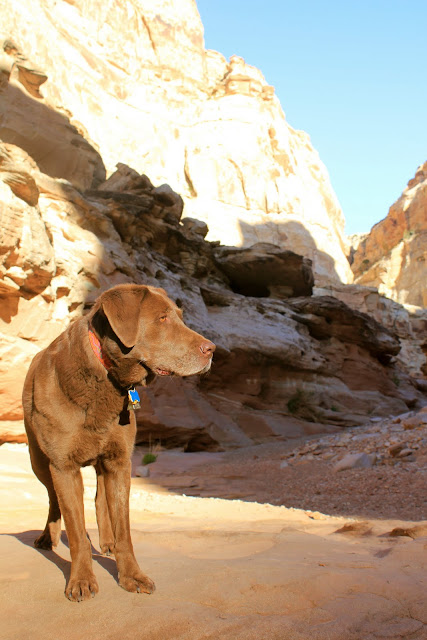 We also found a Claret Cactus in bloom in a sandy alcove off the canyon. The delicate flowers seem shocking next to the sharp spines on the cactus. 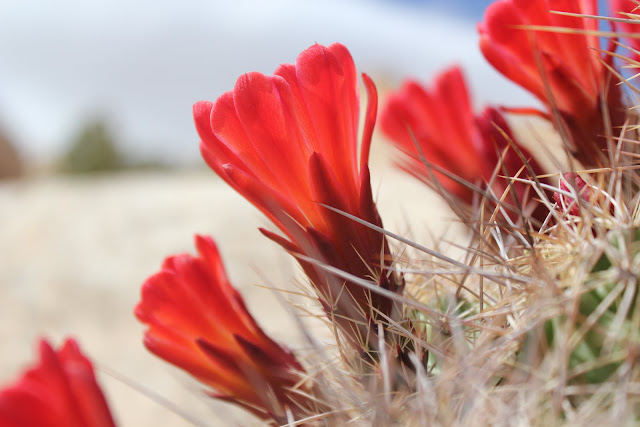 After exploring the canyon, we moved to a campsite in the San Rafael Reef. The reef is a Navajo and Wingate sandstone wall on the east side of the formation called the San Rafael Swell. It feels like a reef with the sandy colored walls and sand covered washes. 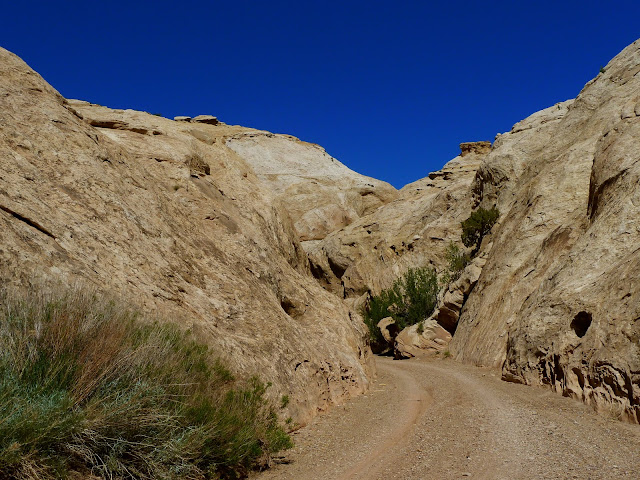 Selective erosion has left behind the harder rock in some fantastic formations like these towers. 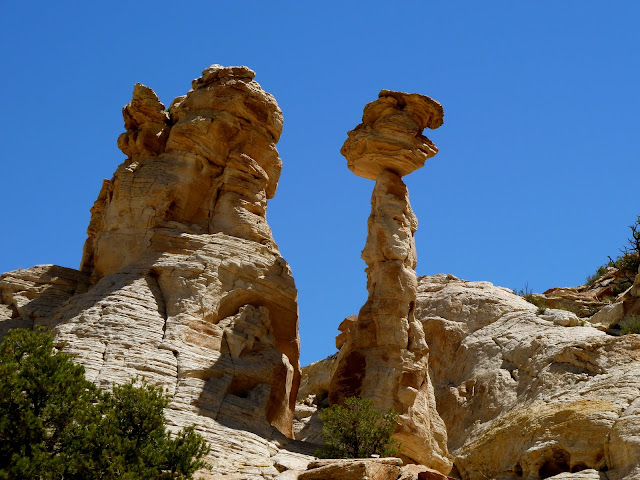 We camped within the Reef during our last night at the San Rafael Swell. We wished that we'd found this special campsite earlier in the trip. You can barely see the top of our van in the photo below. 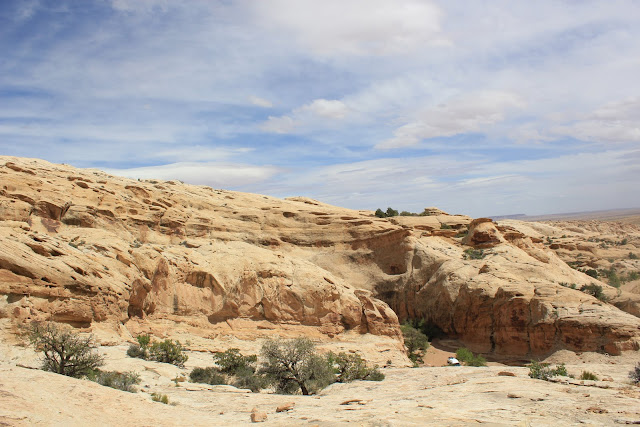 It was an amazing trip. We explored so much new territory that was unlike anything that we'd walked upon before. I'll have one more post about the trip, and then I'll stop - I promise! 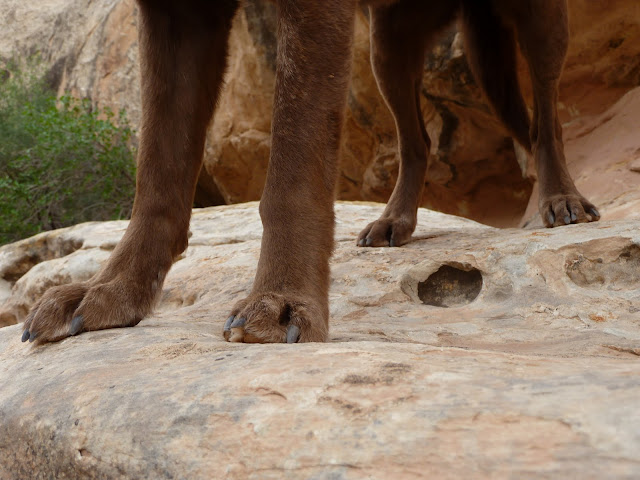