We've rocketed directly from snow and freezing temperatures to summer. There is no springtime in the mountains. Glorious blue skies, sunshine, and temperatures in the 70's. Days to savor...

My friend the bobcat who appeared in my post two days ago showed up again directly in front of my wildlife camera. You can see from the look in his eyes that he had a plan for this visit. His plan was to reclaim his territory from me. 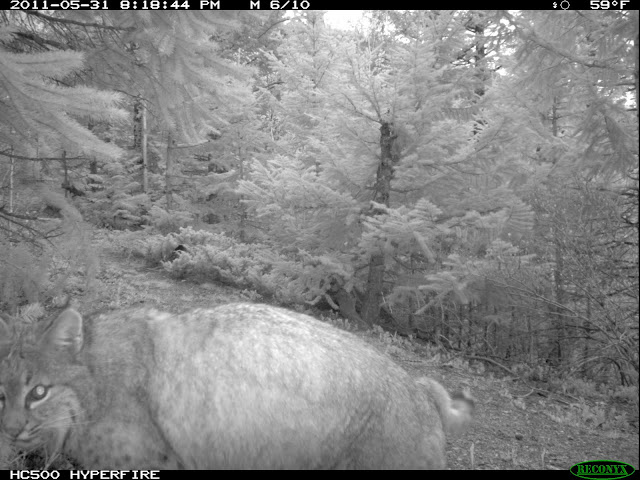 In the next photo, Bob the cat was peeing in exactly the spot where I kneel to check my camera. When I arrived the morning after his visit, the ground was still wet and the branches of small shrubs were still soaked in urine. I didn't notice the wet area until I'd knelt in it. I must have reeked of bobcat urine for the rest of my bike ride, an occupational hazard for a wildlife camera nut. Bob wins this round! 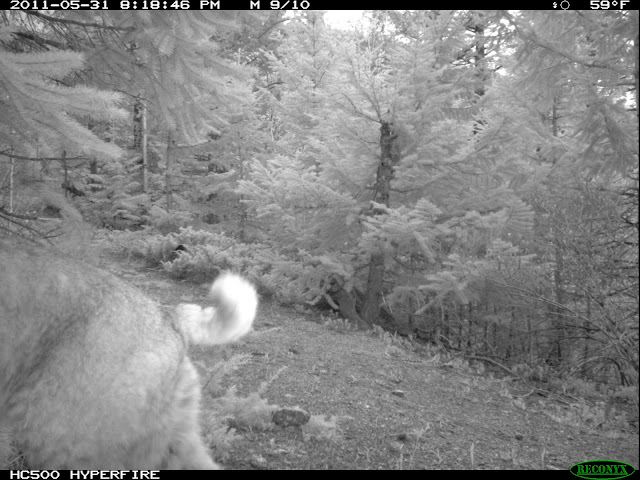 K and I have been enjoying summertime bike rides together. Although I didn't mention it, I was really worried about her a few days ago. We tried a tiny bit of agility practice for the first time since her initial paw surgery last September. The next day, K was limping and acting sad.

However, after I gave her a day off from any vigorous exercise, she's been zooming around like a young puppy during bike rides. Her paws seem to be working beautifully! 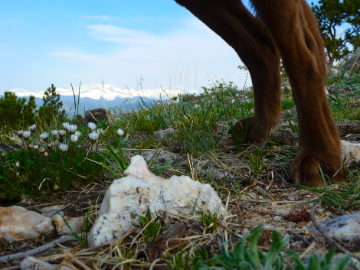 K, also known as "Goody Four-Paws", has even been mischievous, sprinting away with her nose following hot wildlife scents. Each time, I call her back, and she sprints to me. 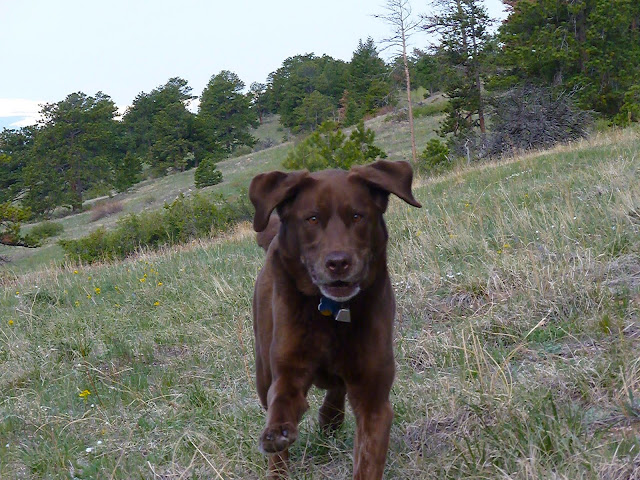 So, perhaps I worry about her too much. I can't help it - she's my one and only K. 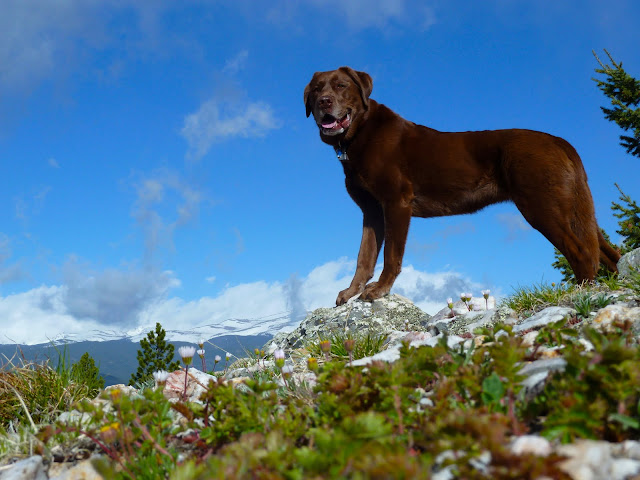 We'll try agility again sometime soon... but, if it hurts her even the slightest bit, her agility days are over. I can pack up the equipment until the next puppy joins our pack sometime in the future (R doesn't do agility due to elbow dysplasia).

R's paw seems to be healing on schedule too (R's "bad" paw is a hind one so its bandage isn't in the photo below). I must say that we seem to have bad luck when it comes to paw health in our pack! 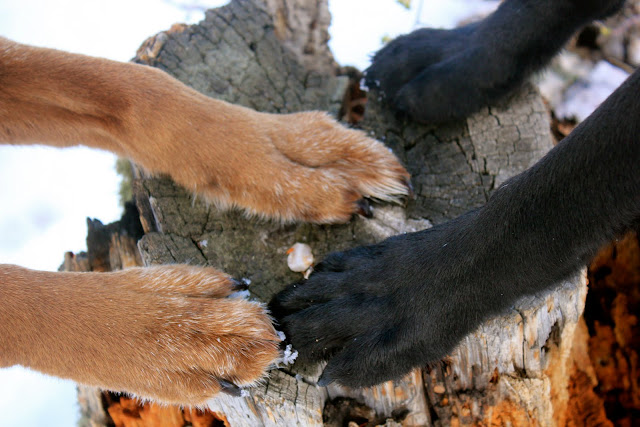 The mountain biking has been sweet recently! I'm wearing shorts and sleeveless jerseys after wearing full winter regalia and riding my snow bike last week. The feeling of the sun kissing my shoulders is glorious!


Our world has turned green, and the birds are nesting. Flickers nest next to a favorite trail of mine every year. They seem to be sitting on eggs now. 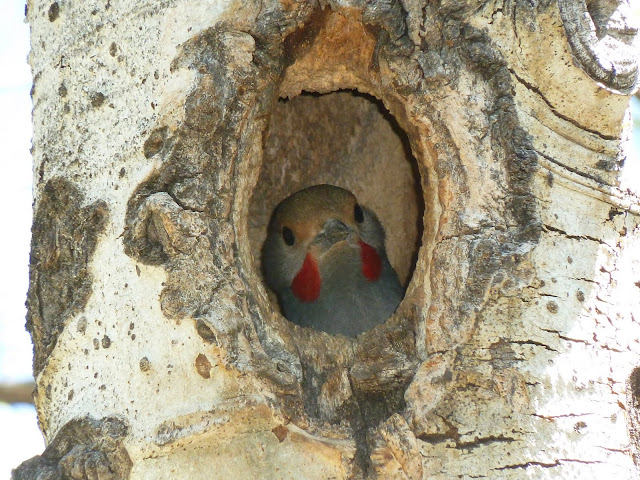 Hermit Thrushes have arrived from far south of here. Their sweet melodies waft from the treetops of pine forests in the mornings and evenings. Their songs are one of my favorite parts of summer. Below, I included the first photo that I've ever managed to capture of a Hermit Thrush. They are called "hermits" for a good reason! 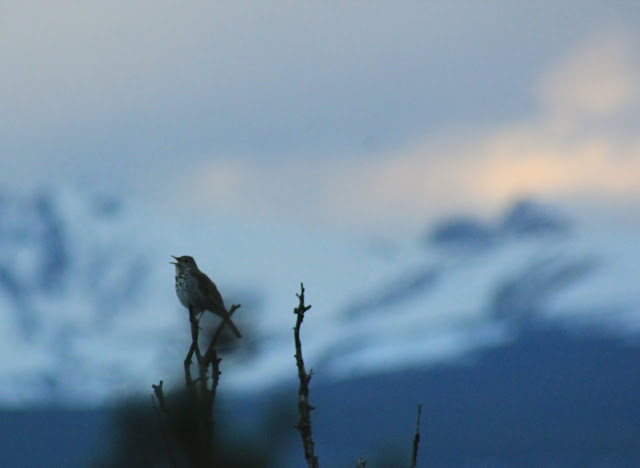 Predators are watching for newborns to snatch away. 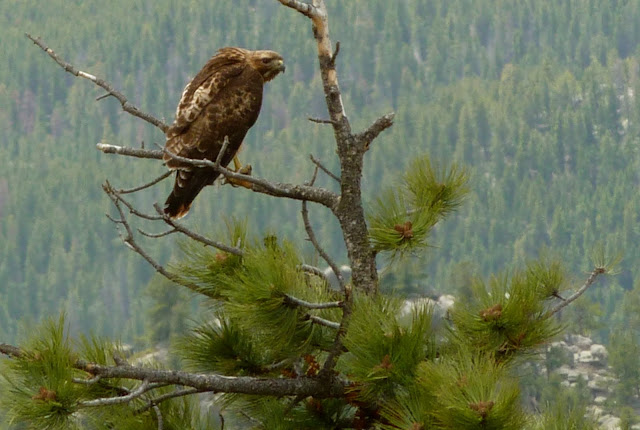 Flowers are bursting and reaching for the sun. Bluebells... 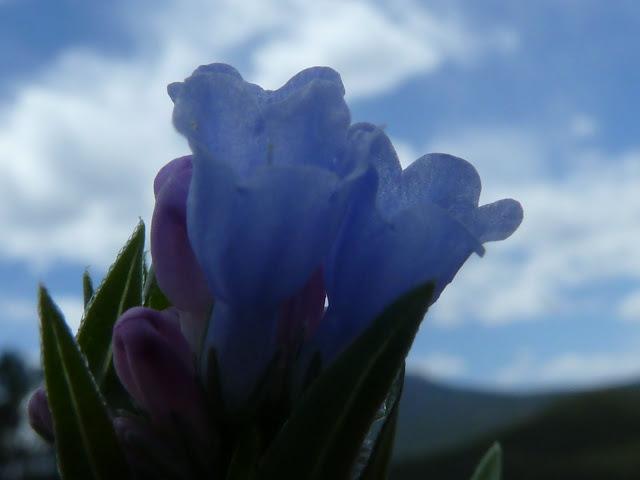 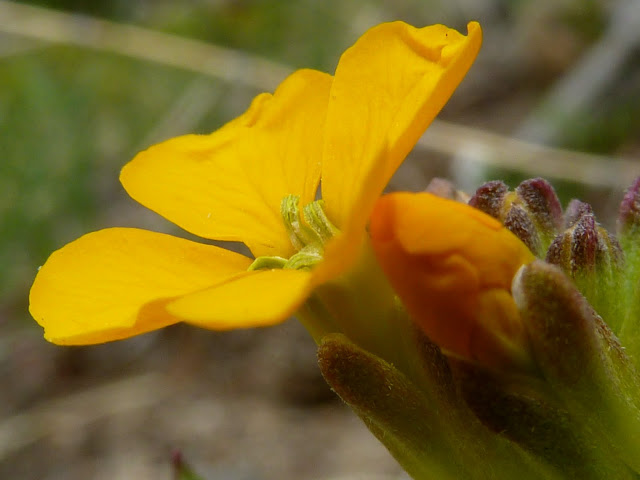 I am on cloud nine, enjoying the sudden burst of summer!

There is also a flurry of bear action as mating season is in full swing. The heart-tugging part of mating season is that sows must separate from their yearling cubs. Sows nurture their cubs, protecting them and playing with them, for the first 17 months of the cubs' lives. Then, they send the cubs away so that they can mate again. I've captured a whole series of photos of a family of bears (a sow and two cubs) in the process of breaking up. One yearling is alone and wandering around looking confused. A second yearling is still with his/her mother. The worrisome part is that the mom and remaining yearling have a male bear with them, waiting to mate with mom. That yearling needs to cut the apron-strings soon! I can't wait to show you the photos and footage but my internet connection is too slow today.

I was able to upload one photo of the yearling cub who has already left his/her mom. This cub tried to mark the same bear whammy tree as the big male bears have marked recently. However, he/she looked clumsy and unsure of how to do it. 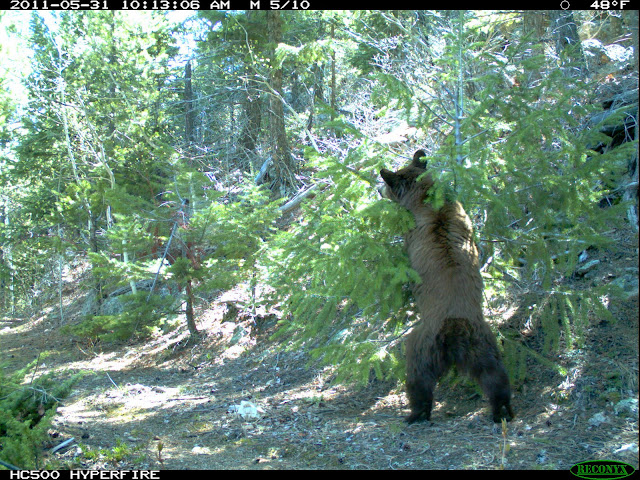