I was sitting on my deck on this glorious summer day, enjoying the buzzing of hummingbirds, chirping of Flycatchers, and the sound of wind through the pine trees. 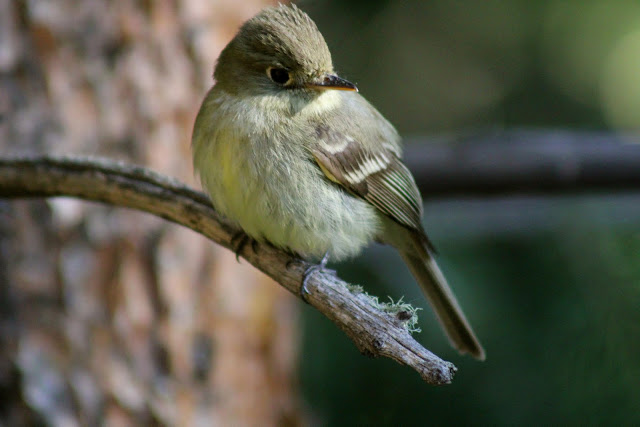 Then, I caught a waft of smoke. Yes, smoke.

It dissipated so fast that I thought that it was an apparition. So, I returned to enjoying the day. A few minutes later, another waft hit me. That's odd, I thought.

I went inside to get a drink, and when I returned to the deck, there was absolutely no doubt that I smelled smoke. It smelled fresh and close. I remember that horrendous day last September when a huge wildfire broke out nearby much too well to ignore the smell of smoke. Here's what I spotted during my bike ride that day. 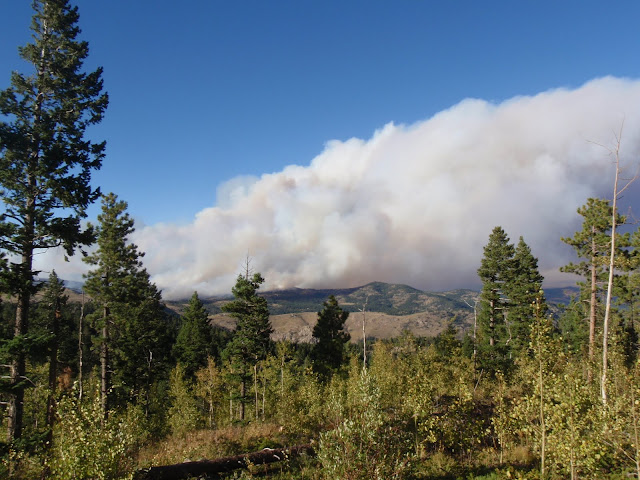 So, I stopped lazing around on the deck. K and I went for an upwind walk, searching for the smoke source. I was headed toward a spot where a non-resident neighbor likes to have camping parties, where I knew that that a fire ring sat surrounded by the carnage of dead trees, felled for the building of a house that never materialized. Someone camped there two nights ago so I thought that maybe the fire had been smoldering for that long and today's wind had whipped it up.

As we approached, the smoky stench seemed to disappear so I thought that my hunch was wrong. However, for my peace of mind, I wanted to see the fire ring with my own eyes. K and I wandered around the vacant property, finally finding the ring of stones.

And, yes, flames and smoke were flickering up from it, despite the fact that there was no one in the vicinity. The light wind was pushing the fire and smoke toward our house. I turned and hurried, as fast as my body would go, back to home to call the firefighters. I had visions of the view from near our house during last year's fire that fueled me to move fast. 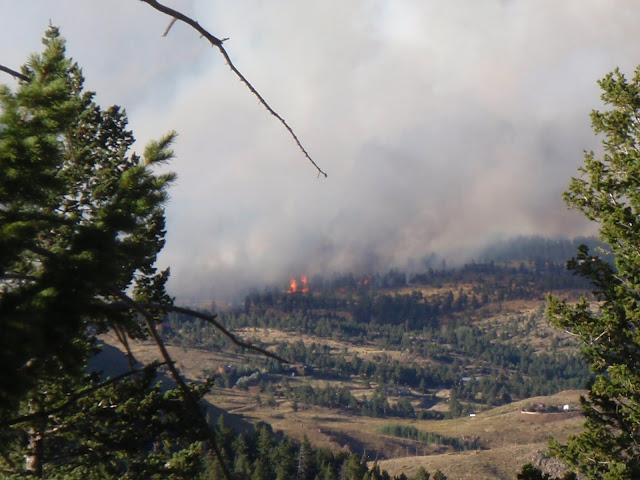 The sheriff and firefighters responded quickly and put out the fire. Thank goodness.

Imagine what would happen if another fire like last year's erupted. Our Mabel and her cubs would be dead. 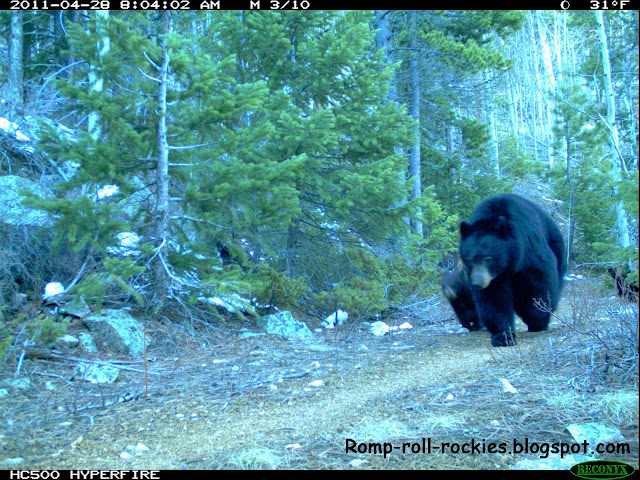 The precious bear trees, marked every summer for decades, would be charred sticks. 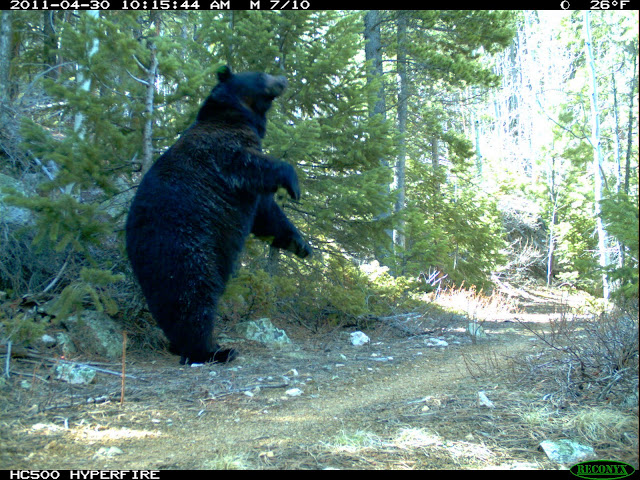 The beautiful spotted saxifrage would vanish. 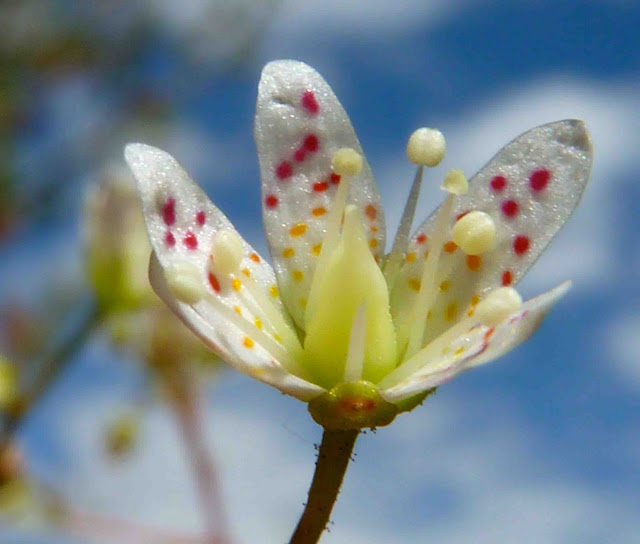 The delicate fawns would flee for their lives and maybe outrun the flames. And, it would be decades before Columbines would bloom again. 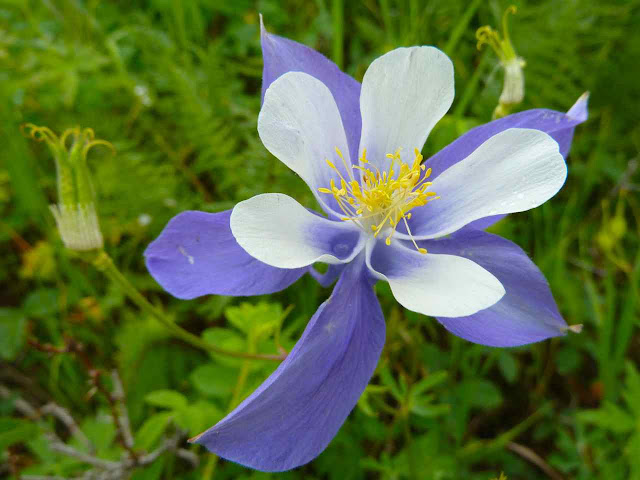 The Prince's Pine would take years to regenerate. 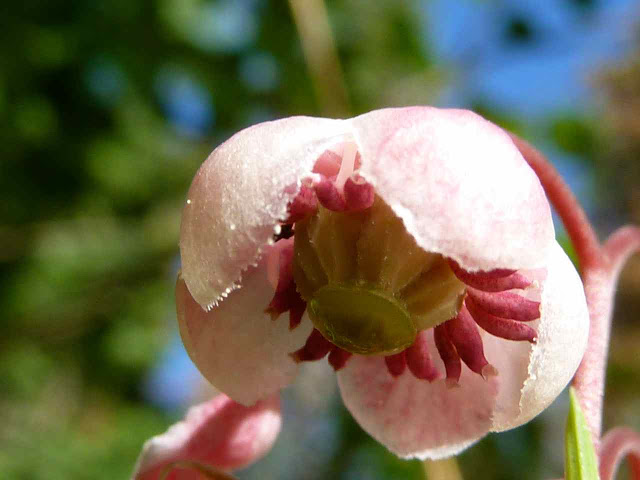 I cannot bear the thought of what a wildfire would do. Most of all, I cannot bear that other people don't cherish and protect our little paradise. It makes me see red.
Posted by KB at 5:35 PM