"-8°F" screamed the outdoor thermometer when I woke up this morning. Can you tell that the world was in a deep freeze based on this photo? You can see K's agility teeter-totter sticking up out of the deep snow. 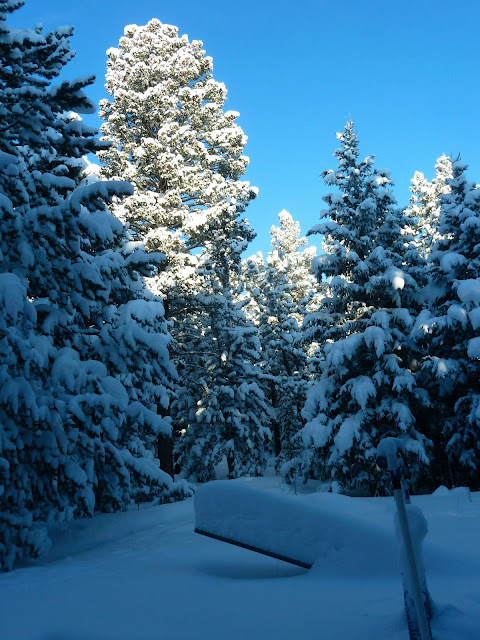 I decided to move slowly while getting ready for K's daily outing in the forest. Surely, if I drank my coffee slowly enough, it would warm up. After sipping slowly for a long time, I glanced at the thermometer. -9°F. That bad news prompted me to do a few chores, feeling certain that my procrastination would give the world time to warm up for us.

Nope - the next check showed -10°F. At that point, I decided that we had to go for it. I put on a ridiculous number of layers, dressed K in her snow boots, and readied my snowbike. I didn't look at the thermometer again because I was sure that the news wouldn't be good. We burst out of our clearing through the narrow passageway between snow-flocked pine trees. 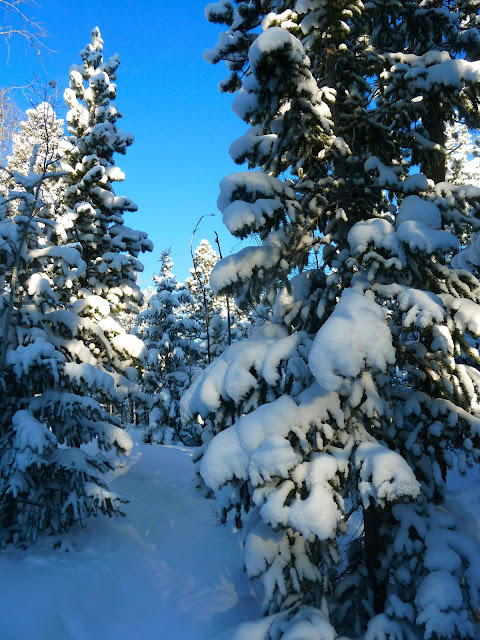 We'd gotten another substantial layer of snow overnight. I couldn't tell how much new snow there was because we've been swamped in snow over the past week. However, it was so cold last night that the new snow was as light and fluffy as air. I pedaled through it easily.

K led the way, enthusiastic to explore our crystal-clear world. 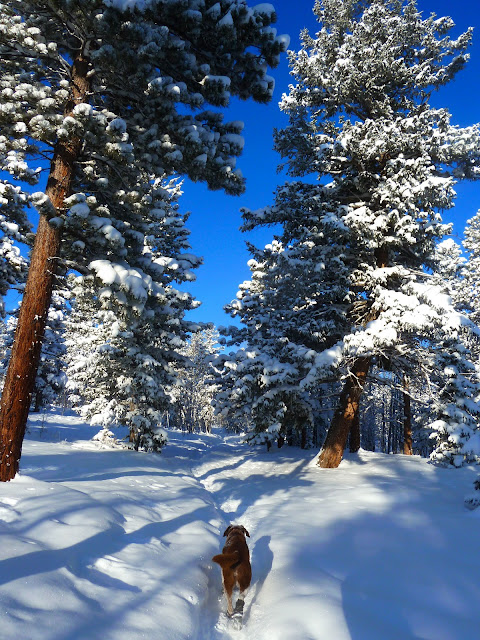 We headed through the forest and up into a meadow, following a track that a friend and I work hard to keep packed down through the winter. Our hard work is paying off.... I was able to pedal the whole way. 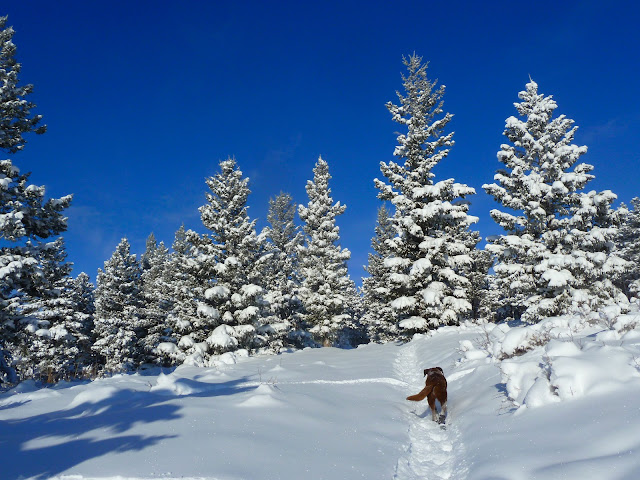 K stood stock still, staring at the boundary between meadow and forest. 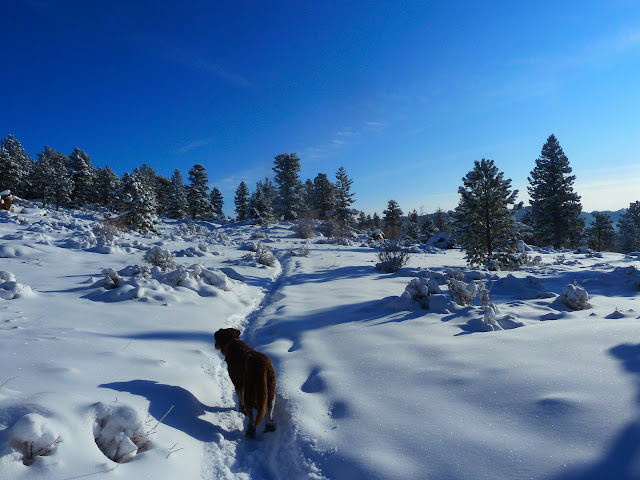 I looked in the same direction, and, at the forest edge, a doe stood watching us. 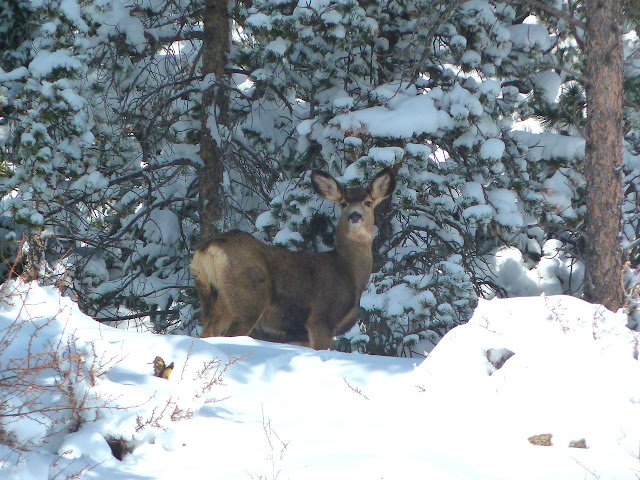 As I gazed at the doe, I imagined how hard life is for our wildlife right now. The world so frigid and most plants are buried under feet of snow. I cannot imagine how they survive. Indeed, some of them don't survive. Yesterday, I found an elk carcass, either the victim of the weather or a poacher (the head was gone which was why a poacher crossed my mind).

Indeed, a little later in our ride this morning, K's enthusiasm for our outing started to flag. I wanted to get a photo of her with the beautiful snowy mountains behind her but she needed to traipse through the deep snow to a boulder for me to take the photo. She wasn't enthusiastic, hanging back next to my bike. I didn't insist. 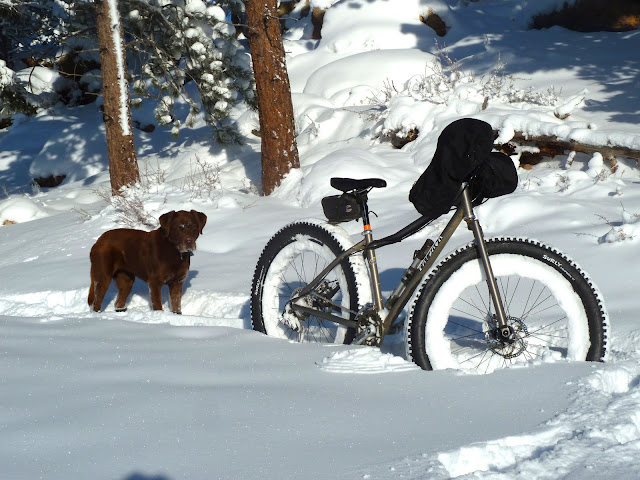 Just before we arrived home, I took one more photo of her. Yes, she'd had enough of the arctic conditions! I think that she was wishing that her human was a little less nutty about going out on a snowbike in the cold! 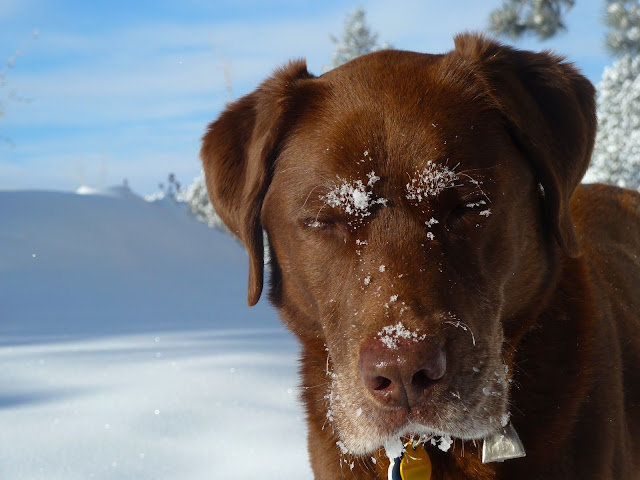 The amazing thing was that I was perfectly comfortable. I wasn't at all cold because I was so well prepared, unlike that 40°F day in October when I had a brush with hypothermia when a surprise cold front and rain engulfed me during a mountain bike ride.

It's fun challenging myself to get out into the forest even on the days like today. I'm always grateful that I did because the beauty astounds me.
Posted by KB at 7:00 PM