Yesterday, I decided to heed the weather forecast, and I pulled another wildlife camera off a steep north-facing slope where the black bears live during the summer months. I took one last photo of "Bear Art" on a huge old Aspen tree. I won't see it again until next April when the snowpack melts enough to make it possible to walk the trail. 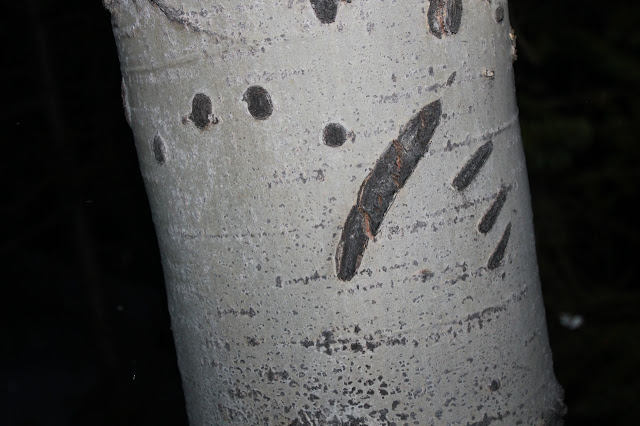 When I woke up this morning and peeked out onto our deck, I was very happy that I'd retrieved my camera yesterday. You can barely see the deck railing peeking over the snow. The big hump of snow is our metal round table. 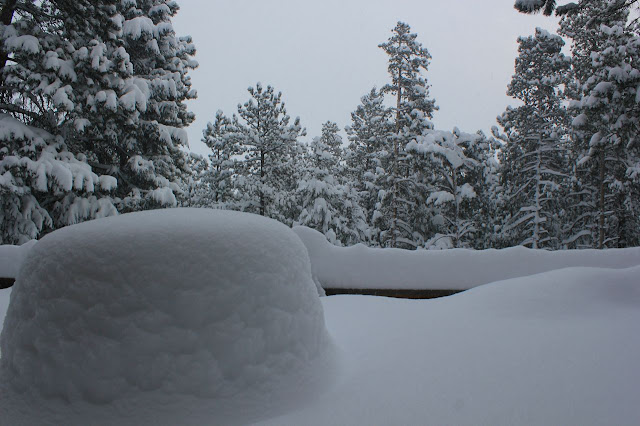 I have to admit that my first reaction to seeing that huge pile of snow was to burrow further under the covers and sleep later than usual. Now that I can't telemark ski due to my spine, I don't love playing in snow as much as I used to. However, if I can overcome my inertia, I am always so happy to get out in it!

After a leisurely breakfast, I buckled on my snowshoes and started plodding through the seemingly bottomless snow. K frolicked like a puppy. 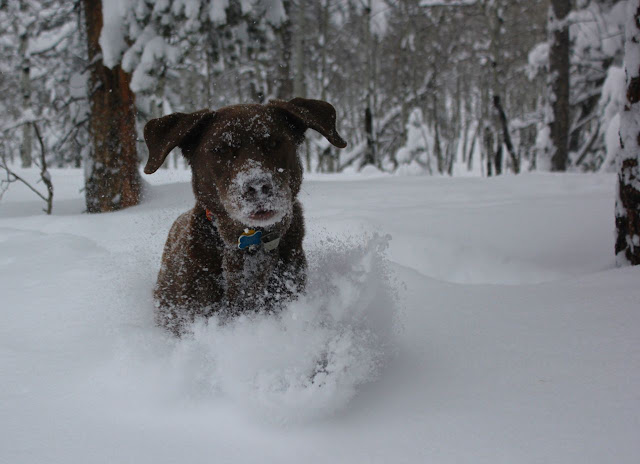 And, she turned into Frosty the Snowdog after one of her romps. 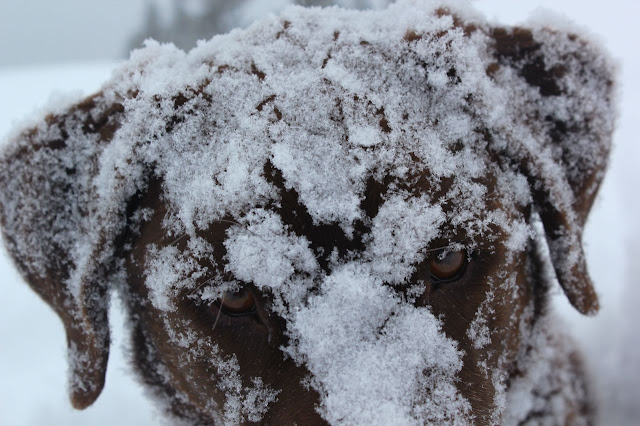 It was heavy and hard work breaking trail through snow that was nearly up to my hips. We didn't make it too far before we turned around and followed our tracks back home. 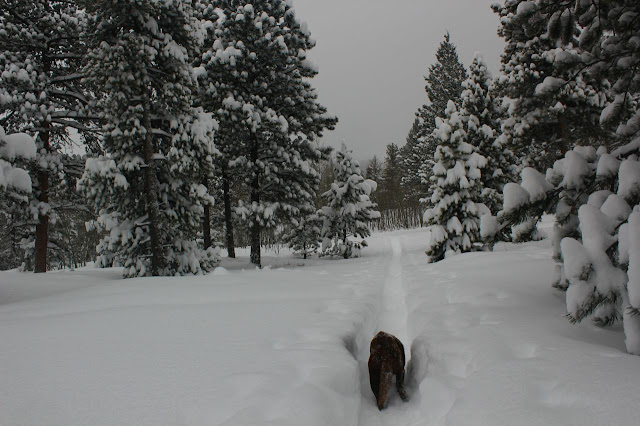 On the packed trail, K managed to keep her face a little cleaner so we can tell that she's a chocolate lab. 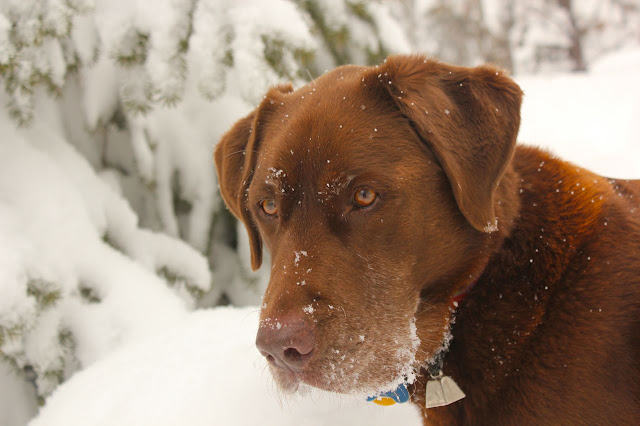 When we made it home, my spine needed the relaxing action of pedaling a bike after the wrenching work of breaking trail. I glanced at my stationary bike and said "Nah". Instead, I pulled out my snowbike and rode on quiet roads that were lightly plowed. I stopped on one road to look at the huge wall of snow that has grown weekly after each plowing this winter. 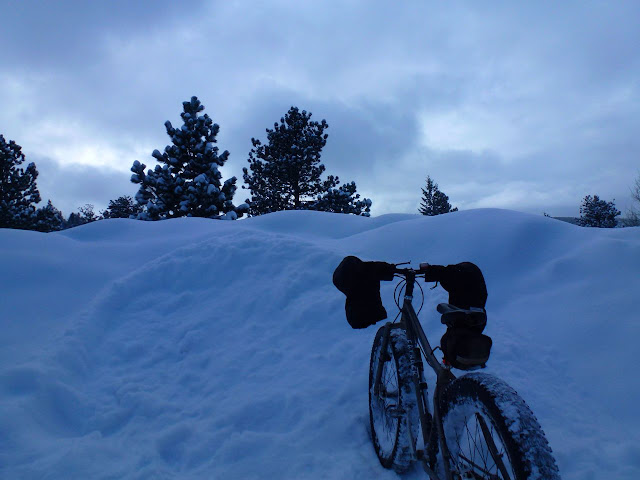 As I pedaled, the storm began to break, and I saw blue sky. 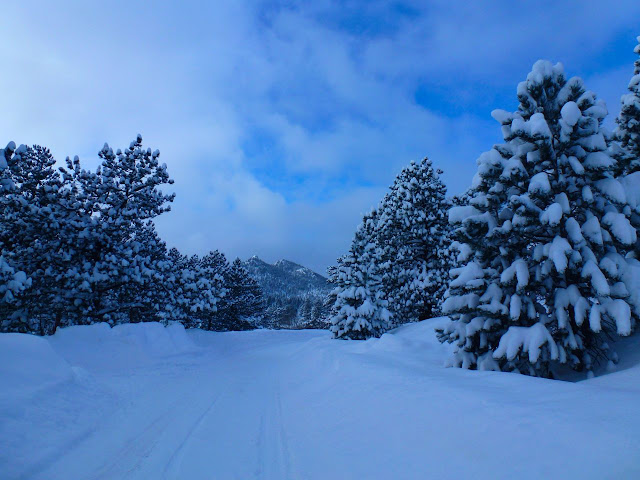 The mountains almost emerged from the clouds, but not quite. 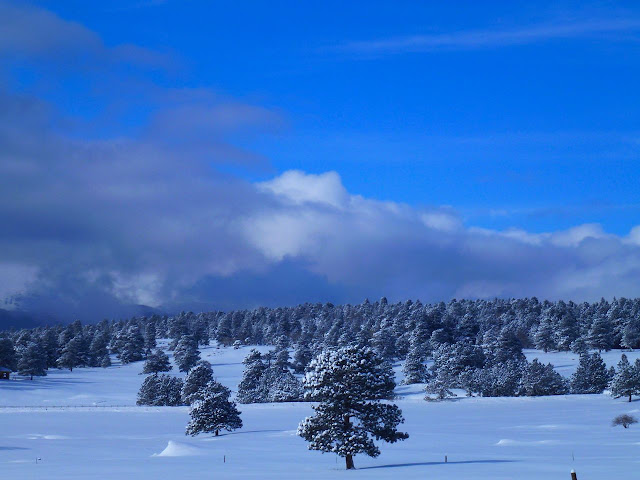 I was very cold at the end of my ride but so happy that I'd gone out to see the glory of nature. To me, it is truly glorious, and I treasure each day, even the freezing cold ones.
Posted by KB at 5:50 PM