A Terrifying and Violent Event

Yesterday was a shocking day. It started out normally, with me and Shyla heading out onto the trails together. We stopped to soak up the sun, on the first really warm day of spring! 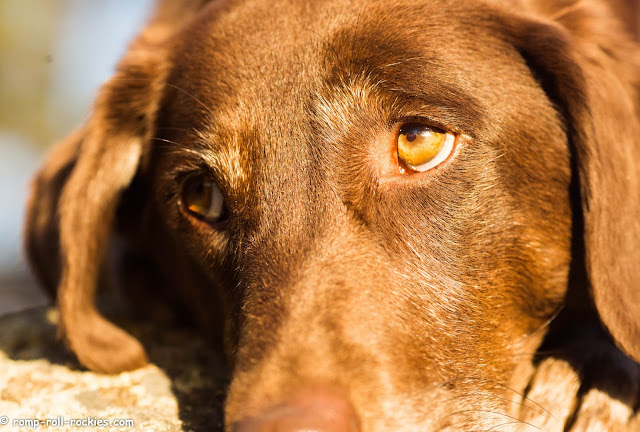 Then, I pedaled and she ran by my side directly up to Hug Hill, a place of peace and fun to both of us. We always take a happy break atop Hug Hill. Yesterday, we started our break with some games, aimed to teach Shyla to imitate me as a way of teaching her new behaviors.

As we were playing, I saw Shyla's ears perk up and her eyes dart to the east. I turned around, and I could make out the shape of someone running up the hill but I couldn't identify the person because the bright and low sun was directly behind her.

The woman said "hi" in a happy voice, and I thought that I knew who she was - a neighbor who lives quite close to us. However, I wasn't absolutely certain.

Thinking it was a neighbor, I released Shyla from a "stay" and said "go ahead and say hi" because my neighbors love Shyla and have been a huge help in her rehabilitation from her paralyzing fear of non-family members.

Shyla trotted toward the person in a typically meek way, with her body low to the ground. The person said something in a high pitched voice that encouraged Shyla. Shyla slowly rose on her hind legs to see the person's face better but didn't jump on the person. However, I suppose that the person might have thought that Shyla was about to jump on her.

As Shyla peered at the person, the person belted Shyla across her face. Given the unstable position that Shyla was in, she fell over... and actually didn't get up immediately. I was stunned into silence as life took on a slow-motion and silent-movie quality. Slowly, Shyla got up and almost crawled to me, obviously terrified by what had just happened. At first, I worried about whether she had a head injury but I think that she was just scared to death.

At that point, I broke the silence with verbal barrage at the woman, who I now realized was a stranger. "Do not hit my dog, EVER", I yelled. I honestly don't remember the rest of what I said as I slowly got closer and closer to this evil woman while yelling at her. There was no defense for her behavior - none. She walloped an innocent dog - and that dog happens to be more fragile than most. I've worked hard to teach Shyla that strangers are not a threat, and I honestly thought that years of work had been destroyed with one punch.

My rage must have scared the woman because she started crying and began to run away. I realized that I needed to get some basic information about her so I asked who she was and how she'd gotten onto land that is only accessible to people who live adjacent to it.

Since then, I've learned that the woman is a chronic trespasser who has been banned from everyone's land. She gained access to Hug Hill by trespassing across land that she's been told that she may *not* set foot on. She is not the kind of person who I should have trusted to interact with Shyla. It was a costly mistake.

We tried to do a normal ride home after the altercation but Shyla didn't want to run. We moved at a slug's pace as we headed home. I had tears in my eyes the entire way. I spent the whole day obsessing over the event, too upset to even write a blog post about it.

There is a decent piece of news now, the day after that trauma. I took Shyla's older brother, R, along on our ride today to bolster her confidence, and she seemed very happy. We didn't see a single person so I don't know how Shyla will cope with seeing non-family members on the trails after that terrifying event.

Here's a photo of the two of them today, atop Hug Hill. Today was "take back Hug Hill" day. I wanted to go right back there and have a ton of fun with my dogs, like I've done almost every morning for years. I figured that if that awful woman showed up again, R would deal with her.

Just kidding - sort of. R doesn't have a mean bone in his body but he can look scary. 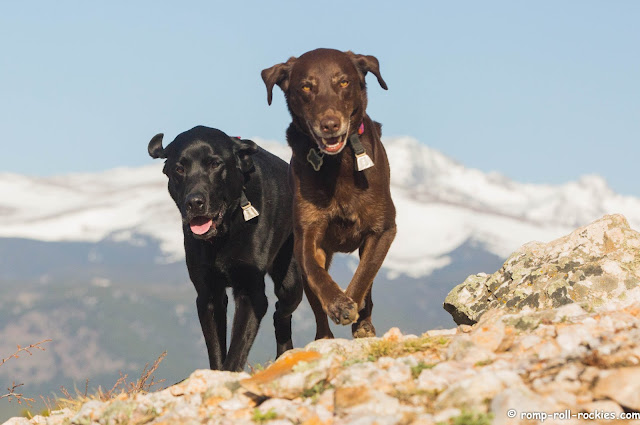 I think that R will be with us again tomorrow. He's a great source of security for Shyla and for me.
Posted by KB at 4:01 AM