Hachi's behavior this week has been all over the map. He seems super happy on our hikes. He's overjoyed to run like the wind with his sister in Lab Valley. They also have a great time exploring together. I love seeing them running or walking side-by-side as they enjoy all the scents in our valley.

In his training, he started to have an old issue this week. At times, he seemed unable to calm himself sufficiently to focus on any training. He barked in frustration over things that he can usually handle. For example, when we play the "Bucket Game", he is supposed to tell us that he's ready for us to handle him (e.g., paws or ears) by lying still while looking at a container full of treats. He gets a treat after we manipulate a paw or look in an ear. This week, he barked in frustration during the game to such an extent that we ended it.

He had this issue before almost a year ago, and relaxation exercises during the day helped immensely. However, with all of the chaos in our lives, I lost track of his relaxation mat so I stopped doing the relaxation exercises. This week, I finally refound his mat, and we've restarted his relaxation protocol. And, after just a few days, he's capable of doing the Bucket Game again without barking in frustration throughout it. Woo hoo! 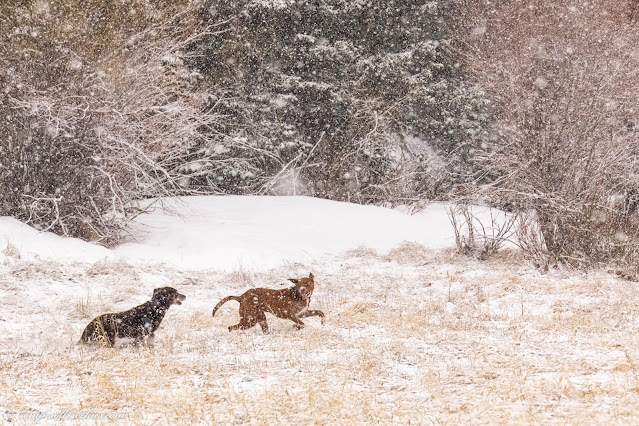 Another snow storm has started that is predicted to dump another foot of snow on us. Our internet was down Sunday afternoon/evening due to the snow so this post is late. I'm so ready for the snow to end for the season but the pups were over-the-moon happy during a hike as the storm started They love it. 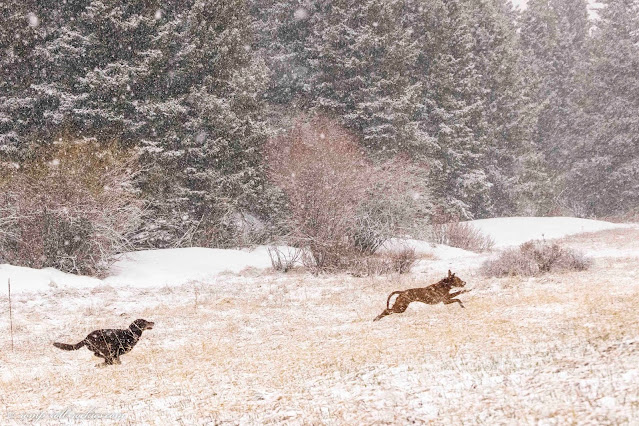