This week was mixed with Hachi. We had a great visit to the vet hospital. I've never seen him so relaxed in the exam room. We played games, let him explore, and did the bucket game. We were so happy with how it went! 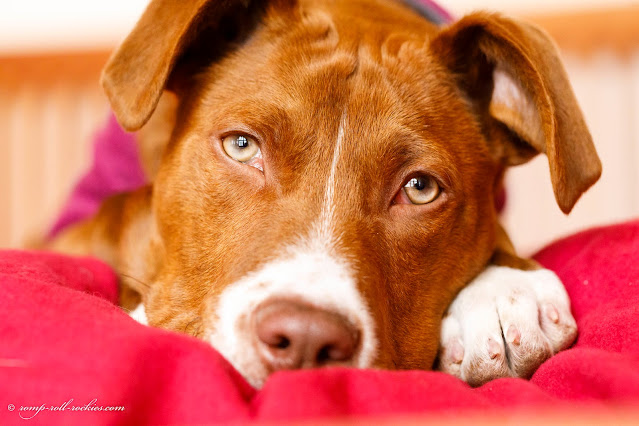 Our trainer came to our house a few days later. We started with the treat-retreat game in a different part of the house than usual. It went well. However, in retrospect, Hachi was a bit amped - but he was very happy. He loves playing these games with our trainer.

Then, we moved to the room where we usually work with our trainer, and we tried moving her even closer to Hachi than last week during the bucket game. Last week, we had her about 2' away but in front and slightly to the side of Hachi. I was on the opposite side of Hachi, and the Runner was in front of him.

Since we wanted the trainer to possibly touch Hachi this week, we moved her so that she was almost exactly opposite me on Hachi's side. Hachi (wearing a muzzle) then needed to walk directly between her and me to lie on his mat. That was too much for him. He did lie on his mat but then he seemed to realize that he was very close to the trainer and sandwiched in the middle of three people. He reacted with a round of barking at the trainer. After that barking, our trainer moved further away but Hachi was spooked.

To end on a good note, we all took a break, and then we went back to exactly the same setup as last week. It went great. That speaks to how resilient Hachi has become. We inadvertently took him over threshold but he was able to calm down very quickly. No long term harm to his training!