A campsite on top of the world

We left Crested Butte and drove southwest, wending our way to a campsite at 12,400 feet elevation in the San Juan Mountains. The last five miles up to Carson Pass were the most hair-raising that I've ever covered. Our 4WD van powered up a seemingly vertical shelf road covered in rocks and boulders. The road was so narrow that our only choice would've been to nosedive into a ravine if a fast-moving vehicle had barreled down the road at us. When we finally arrived at the top, I was in agony from my neck and from the tension. I was already scheming to avoid being in the vehicle for the inevitable drive down the gulch when we moved on. 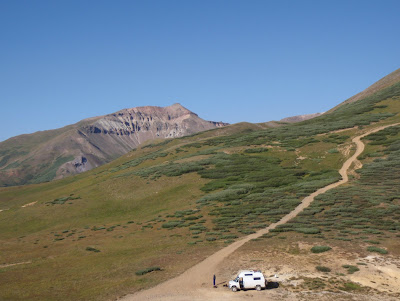 But, what a spectacular spot it was! We arrived just before the sun fell below the western mountains, lighting up the mountains to our east with a rosy glow. 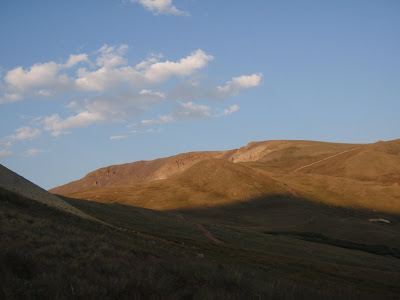 The next morning, we headed northeast for a combined bike/run. Straight out of camp, we climbed a 1000' of steep rocky terrain. I felt the effects of the thin air, as my legs seemed sapped of their normal power and my lungs struggled to take up oxygen. 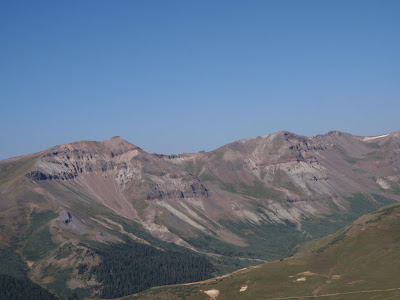 But, the initial climb reaped incredible rewards. The singletrack Colorado trail followed the knife's edge of the Continental Divide with cliffs on one side and a vast plateau on the other. 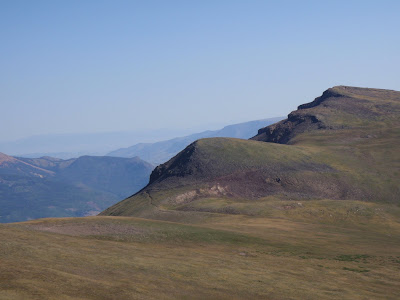 The dogs sprinted on the plateau, frolicking like a pair of puppies. R's ears blew straight upward in the high mountain wind. 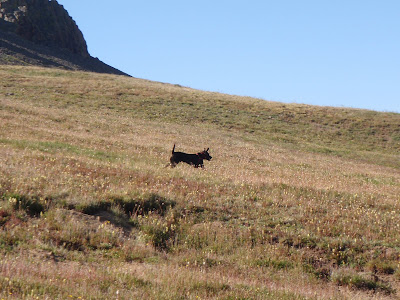 Although we traveled along the Divide, the terrain still undulated up and down. The hills were steep and rocky. Sharp rocks that I feared would slash my tires covered some slopes. This ride qualified as extremely hard work. 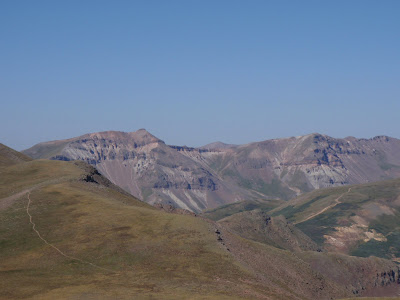 We rested at our turn-around point, playing with the dogs and enjoying the day. 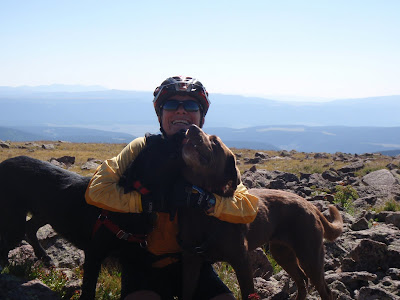 I caught my husband and K smooching! 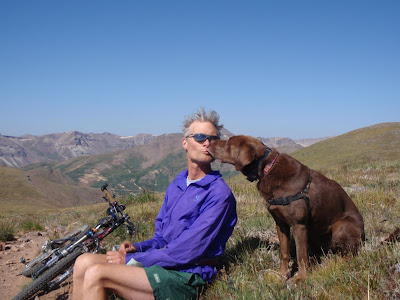 As we reluctantly started back toward camp, the dogs ran along with me on my bike. 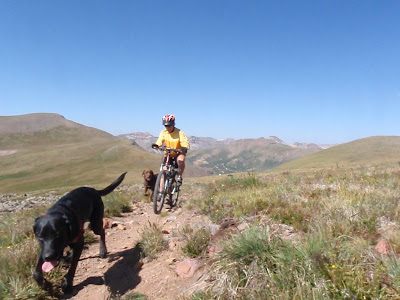 But, the ever-impatient R surged ahead, leaving me and K on our own. 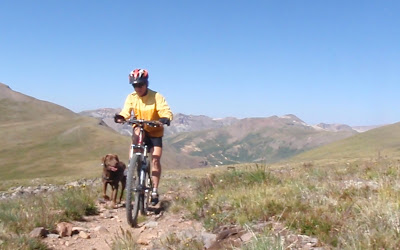 On our return run, R had an encounter with a ferocious marmot. Marmots are large rodents, somewhat like badgers, that live in the rocky terrain of the mountains. They spend most of their lives in underground dens, hibernating for more than half the year. They appear to live in a coat of fat by the end of the summer but that fat will keep them alive for the winter. When above ground, they usually linger close to the den entrance so that they can escape rapidly, if needed. Below, a fat marmot stood on his hind legs shouting out warnings to his colony (usually at least 6 individuals) that danger approached. Undoubtedly, he stood on the boulder covering his den entrance. 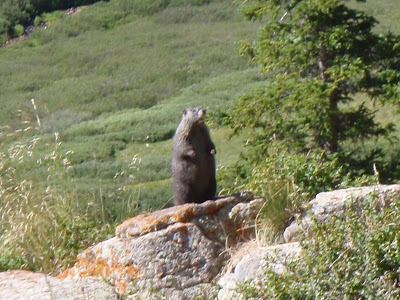 On our return trip to camp, R chased a marmot who had strayed too far from his den. The marmot climbed on top of a huge 5 ft tall cairn, stood on his hind legs, and bared his razor-sharp claws and teeth. The cairn was similar to the one shown below but wider. 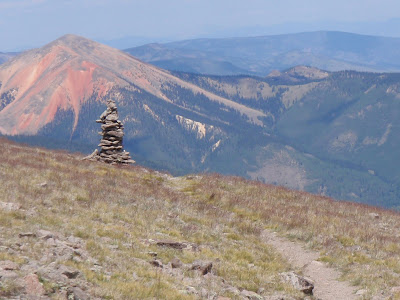 R was stymied, unable to figure out what to do next. He stood below the cairn, barking at the marmot and ignoring us. After what seemed like a ten-minute stand-off (but was probably more like 30 seconds) during which we inched toward R hoping to grab his collar, the marmot made a mad dash for his den entrance about 30 yards away, and R came within a hair of catching him. I have no doubt that R would have lost a fight with a marmot. Those knife-like claws would have sliced serious gashes into R's skin. So, we saw it as our lucky day - we'd narrowly averted a disaster. For the rest of the vacation, we kept R on leash in terrain that looked even remotely like marmot habitat.

Part of why R's behavior caught us by surprise is that K has never been very interested in marmots. The very next day, she and I passed close by a marmot whistling out alarms to his colony. K stood next to me and watched him with mild interest. In the video below, you can hear me remind K not to go toward him in a low voice.

After the near-disaster with the marmot, we ended our run/bike by descending into camp, now rumbling down the near vertical slope that we'd initially climbed. 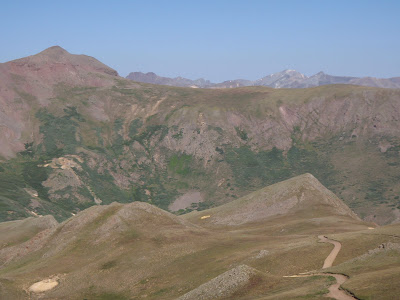 I lingered behind the pack, photographing a few of the many small flowers that had been catching my eye all day. Glorious King's Crown glowed deep red, popping out of the crevices in the talus slopes. 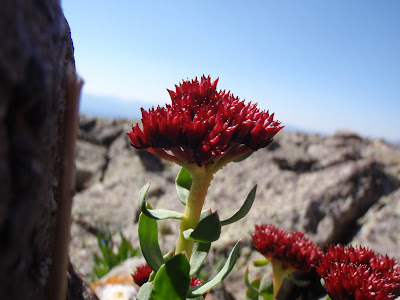 Alpine Springbeauties (Claytonia megarhiza), usually early spring bloomers, blossomed on a steep slope. I suspect that the last snowbanks recently melted from that spot, allowing these exclusively alpine flowers to shine. These plants grow very slowly, taking decades to prepare for their first bloom. Their tap roots reach 6 ft down in the rocky soil. What hardy plants, flourishing in this environment. 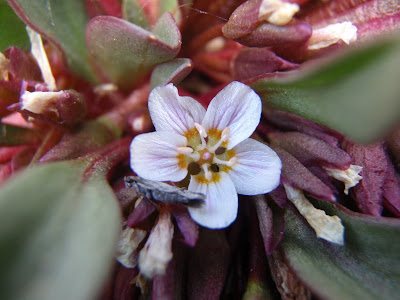 And, purple clusters of penstemon flowers lined the more protected parts of the trail. 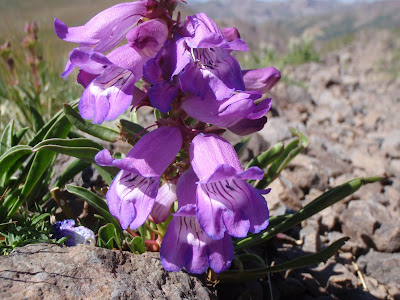 What a day. Our sleepy pack relaxed in the sunshine, unmoving for the remainder of the day.