An epic and scary journey high in the mountains

K and I set out confident and happy, planning to mountain bike about 12 miles from Carson Saddle, over a pass, and finally down Pole Creek to meet the boys at the Rio Grande Reservoir Road trailhead. According to my two guidebooks and topo map, navigation would be simple because I'd be following the Colorado Trail, a well-marked route in my previous experience.

We didn't rush at the beginning because I figured that we could ride those easy 12 miles faster than the boys could drive a much further distance on rough roads to meet us.

I spotted a totally novel flower to me, Prairie Smoke (Geum triflorum). To my surprise, it's a member of the Rose Family. Most Rose species have much simpler round flowerheads like the domesticated rose. These spiky and nodding flowers covered the hillside for our first mile. 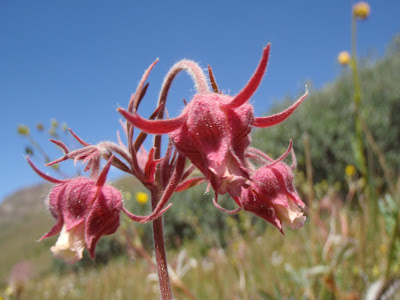 We crossed a couple of streams where autumn-heralding Gentians bloomed. The petals of the purple Fringed Gentian (Gentianopsis detonsa) twist to a whorled apex. Patches of them glowed in the grass. 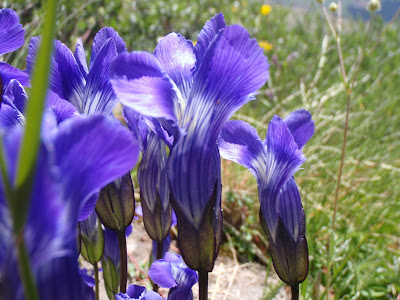 'Mountain' Gentians (Gentiana parryi)chose more solitary lives. Every here and there, I'd spot a blue flower jutting its head above the neighboring plants. 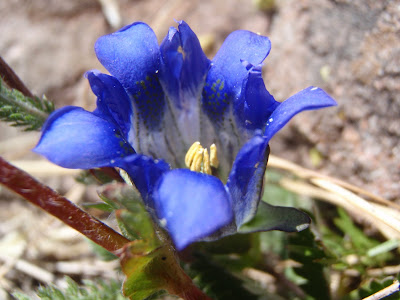 Finally, the most secretive of the Gentians, the Siberian Gentian (Gentianella prostrata), showed its tiny head in the grass. 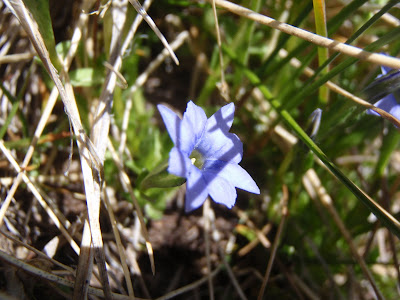 Based on the number of Gentians I saw, autumn will arrive in the blink of an eye.

As expected from our map, we climbed up toward a pass. Rock statues punctuated the hillside, clanging in contrast with the verdant streams we'd just crossed. 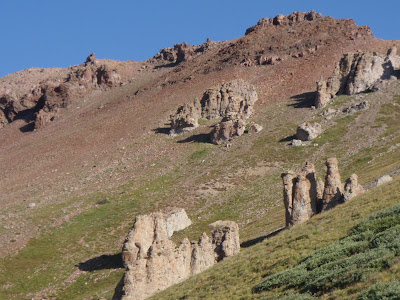 Despite the desert-like formations, alpine wildflowers shared the hillside with them. 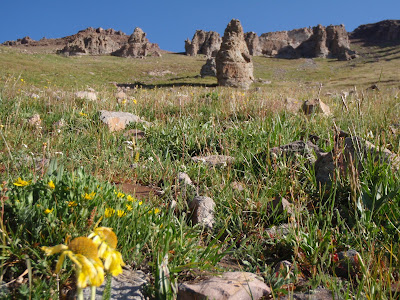 As always on uphill slopes, K led the way, exploring every scent while wondering why humans are so slow. 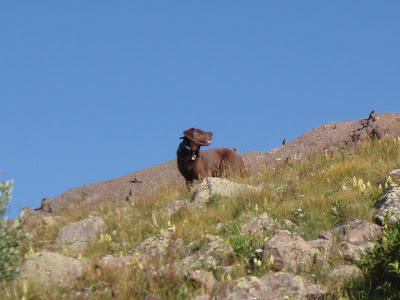 We closed in on the pass with a whole new range of mountains appearing like a mirage on the horizon. At that point in our journey, I had no idea that we'd be exploring that range in great detail over the coming hours! 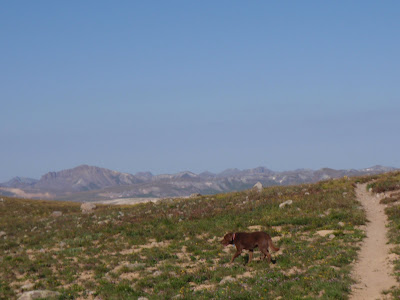 We gazed at lakes, including Cataract Lake, nestled down among the peaks. 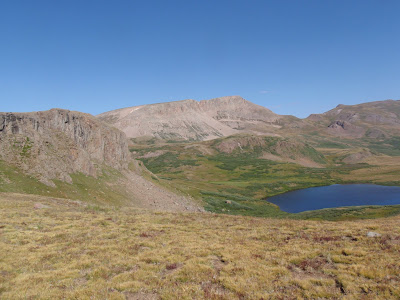 At this point, I expected a trail intersection, and I wasn't disappointed. However, the intersection said that Trail 787 went one way and the Colorado Trail (CT) went another. Everything about this intersection confused me. First, my National Geographic map said that I should be seeing Trail 717 going in the same general direction as 787 was headed and the map showed *no* trail 787. Moreover, according to my map, the CT was supposed to be the same as 717. I later learned that the "717" on my map was a typo - it should've read "787". That typo was a huge part of why our easy trailride turned into an epic journey.

My head spun even more when I noted that a wood sign pointed toward the CT but an adjacent sign said that the land in that direction was closed. I spent a good bit of time at this intersection mulling over my options. 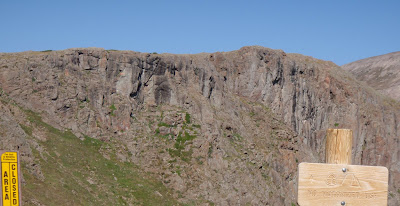 Finally, I defaulted to the Colorado Trail. I reasoned that I *knew* for a fact that I needed to follow the CT all day long, and the other trails didn't seem to jibe with my map. So, K and I bounded down the CT toward the lake, where she swam and played like a puppy.

Shortly after the lake, I began to wonder why I was climbing *again* given that the profile of the CT segment showed one big climb to the pass that we'd already crossed and then a downhill ride to the trailhead. I reassured myself that I couldn't go wrong by sticking with the CT - a humorous perspective in retrospect. The terrain beyond the lakes was simultaneously stark and beautiful. But, I spotted my trail actually climbing some of these mountains in the distance, a scary sight. 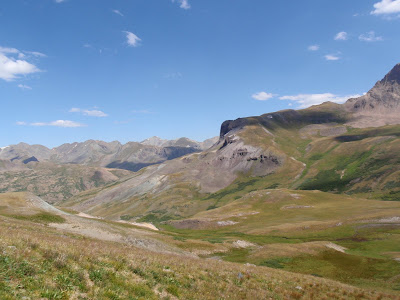 After the first steep wall we scaled, K waited patiently for me. The trail rose precipitously on loose rocks, causing me to dismount and push my bike up the cliff. 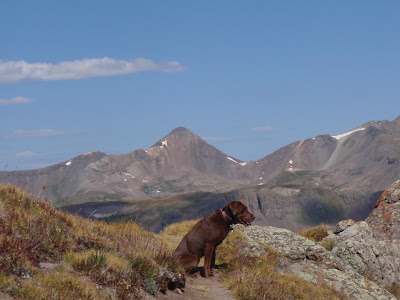 As we crossed a gentle rolling plateau between mountains, the trail disappeared at times, with only cairns to lead the way. It looked like almost no one else on Earth had ever tread on this tundra - another detail that flummoxed me because the CT has been a popular trail for years. 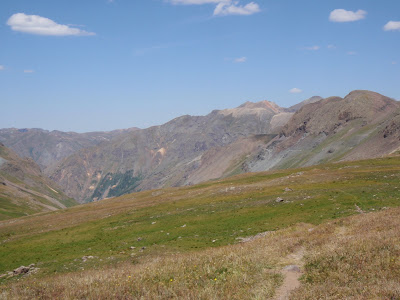 In this section, I ran into a group of four backpackers. The first three assured me that I was on the right track because we were definitely on the CT trail. But I should've listened to the fourth backpacker more seriously. He said that, although massive rock piles made following the trail super easy, it didn't seem to even remotely follow the trail drawn on his map. He said that, to be perfectly honest, he had no idea whether he was following the same CT trail as his map showed.

After that conversation, K and I took a break to think over our predicament. I knew that we'd done some serious work because she voluntarily laid down to rest next to me. I sipped from my Camelbak, and I got nothing but air. Out of water. $@#&! 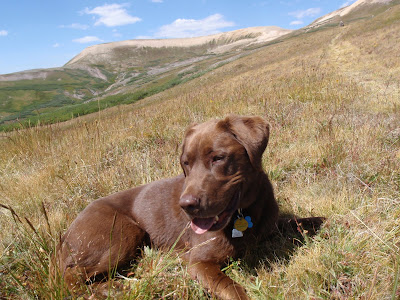 I turned on my 2-way radio to try to call my husband, and we could almost hear each other over the static. I repeatedly said that I was sticking to the CT - but I later learned that he never heard those words. Shortly later, the radio went completely silent - telling me that a major mountain or too much distance separated us. Because cell phones never work in these mountains, I hadn't even brought mine. I was starting to feel a little scared.

Based on my reasoning that no one would ever change the start or end points of a CT segment, I stuck with the CT. It seemed to become more defined and worn. A good sign, I thought. 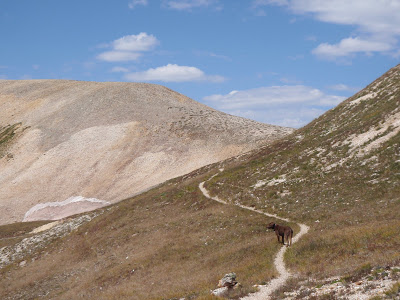 After yet another lung-searing, bike pushing, vertical climb, we came upon a tarn, a seasonal snowmelt pond in the tundra. Although it didn't look like the cleanest water, I let K drink as long as she wanted. I licked my rapidly drying lips and wished that I could drink from it too. K is one of those mountain dogs who seems to have become resistant to giardia - a great thing on that epic day. 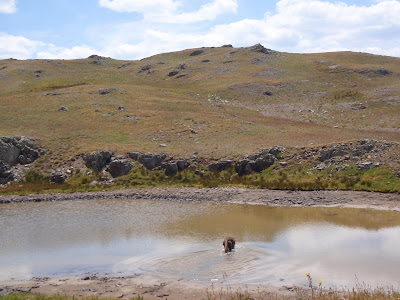 Shortly after K's respite in the tarn, we met two day-hikers who told us the story of the trail. It had been moved quite recently. In fact, these hikers had seen trail crews putting the finishing touches on it early this spring. The hikers told me that it was exactly 2.3 miles to the trailhead with some seriously steep climbing thrown in. They weren't lying. 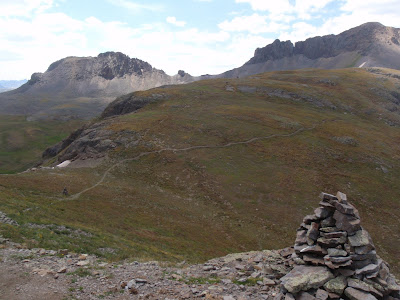 Those kind hikers had also said the trailhead was at Stony Pass. I knew that wasn't where my husband had been planning to meet me but I pushed toward it anyway. My brain was muddled by fatigue and high altitude but my reasoning was that he'd heard me say on the radio that I was sticking with the CT and would ask people where the CT emerged from the wilderness.

The trail wound around a mountain toward the trailhead briefly paralleling a lush drainage. 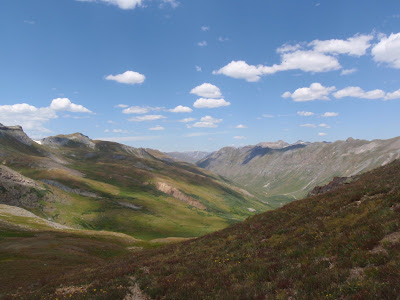 A clear stream trickled down the mountain, and K drank her fill. At least one of us was staying hydrated! 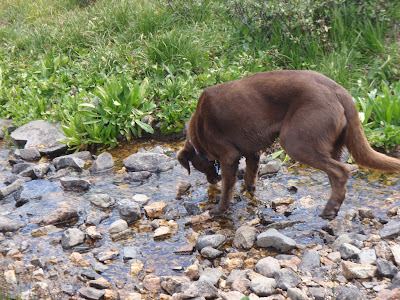 Finally, after covering the never-ending 2.3 miles, I spotted the 4WD road where the trail would emerge. At about the same time, I spotted a columbine. I thought that our unexpectedly taxing adventure was winding down to a happy ending so I took K's photo with the delicate flowers. 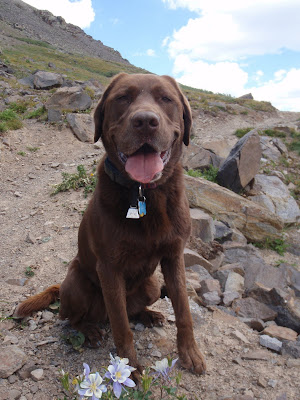 We rolled down onto the road, and I started looking for our white van. But, the area was deserted except for the day hikers' pickup truck. I rode up over the pass, thinking that the van might be on the other side. No luck. K and I collapsed next to another tarn to contemplate our situation.

Based on my unreliable map, I guessed that my husband was waiting miles and miles down the steep and rocky road. If I were alone, I would've bombed down the road to look for him. Alas, I wasn't alone and needed to take care of K. I didn't even consider having her run down the road next to me - such a long and rocky downhill run could have badly hurt her joints or paw pads. I decided that we'd wait at the pass until my husband eventually untangled the series of blunders that had led me to the wrong place. I put on every stitch of clothing in my backpack to wait for him on the windswept pass.

But, first, I decided to move to the sunnier side of the pass. As K and I crested the pass, I was surprised to see that three new vehicles had just arrived at an overlook. Much to my chagrin, I decided that it was time to ask for help. What amazingly generous people they turned out to be. They all seemed *eager* to change their plans to try to help me. They watered K and filled my camelbak. Then, they all conferred about where the big white van, my van, was. They all thought that they'd seen it while driving up and finally agreed that it was about 6 miles down the rough road. One SUV had an open spot on its bike rack so those wonderful people reversed their route and drove K, me, and my bike down to the van. I wish I had asked for their address so that I could send them a huge thank you!

We finally arrived at our trusty van *only* 8 hours after our leisurely departure from camp early in the morning. We ended up camping in that spot for the night. An outfitter who was leading a mountain biking group was camped nearby and absolutely couldn't believe that I'd mountain biked the 'new' CT trail segment. Apparently, it rightfully has already developed a reputation as one of the toughest rides anywhere.

The next day, we visited a camping store and saw that a new edition of the Colorado Trail Guide was recently published, and it shows the new route for the segment that I'd just completed. All that I can say is that there should be signs at the trailheads telling people that the CT has been relocated!

Since it ended well, my enduring memories will be of my day high in the sky with K. Although I was scared at times, I can't imagine a more gorgeous place on Earth. 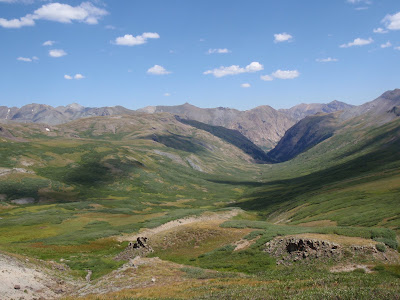