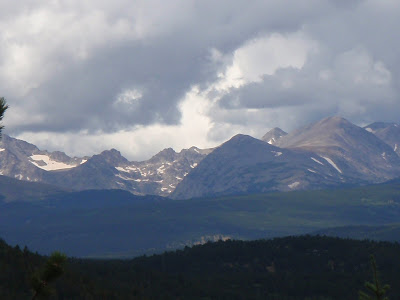 We will stand for E.R.A. and for the recognition at long last that our nation was made up of founding mothers as well as founding fathers. - Ted Kennedy, "The dream will never die" speech, 1980.

Because of Ted Kennedy's public fights for women's rights, as well as for the rights of other disadvantaged groups, my mother admired him and I did too. I paused in memory of Ted Kennedy and my mother yesterday. I'm glad that he lived to see that our people overcame our history to elect President Obama. My mother didn't see that day but she's cheering from the heavens. In my dreams, the heavens look like the mountains. 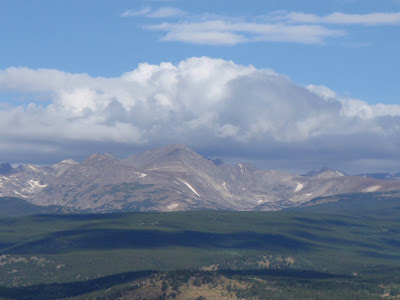 In our mountains, today was glorious. Warm and sunny with a breeze - the kind of late summer day that I can't stand to waste. And, I had the honor of two canine escorts on my mountain bike ride. Over this summer, I've been falling more in love with R, our black lab youngster, day by day. His spirit is irrepressible. In his view, life is to be embraced to the fullest - including random sprinting, jumping, slobbering, chasing, and snoring. I'm striving to achieve his level of panache. His rambunctious playfulness is helping keep K's head above water while she waits for her new thyroid meds to do their good work. 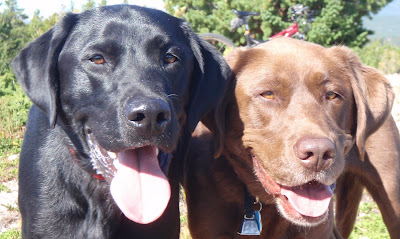 He loves being scratched and patted as is obvious in this video taken at Bolam Pass during our vacation. Be sure to listen to his sounds - they're the best part.


As a final aside before I continue my vacation tales, my fellow blogger, Carol, over at the TheWritersPorch, passed along a Bingo Beautiful Blog award to me. Thank you Carol! I think that my world is beautiful, and I'm glad that view shines through in my blog! I'm supposed to "Pass it on" but that will have to wait until I think about it a bit.

We awakened our first morning at Bolam Pass, in Southwest Colorado, to the sound of rain on the van's roof, quashing our enthusiasm for an early start. By the time I finally truly woke up, sun bathed the world with lingering clouds on the horizon. 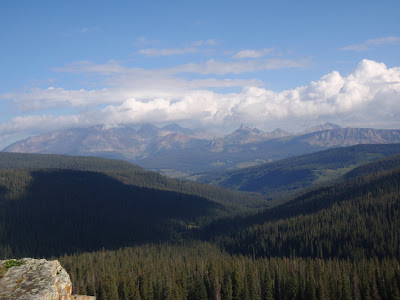 K and I headed out to mountain bike the Colorado Trail toward Blackhawk Pass. I immediately loved the trail, buttery smooth and narrow, snaking through the trees up toward the pass. After climbing through a wet forest, the trail aimed directly at Hermosa Peak. 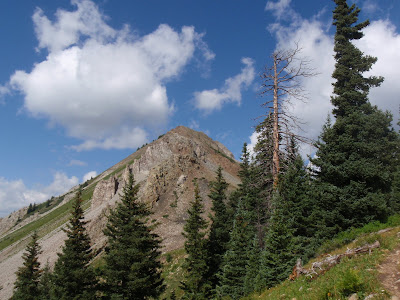 But, before the climbing became steep, our path veered around the flanks of the rocky mountain's expansive scree slopes. These fields of rocks blew my mind. So many rocks and boulders, layer upon layer, spreading as far as my eye could see. Pikas, small cousins of rabbits, chirped from the slopes but, to my surprise, no marmots whistled. 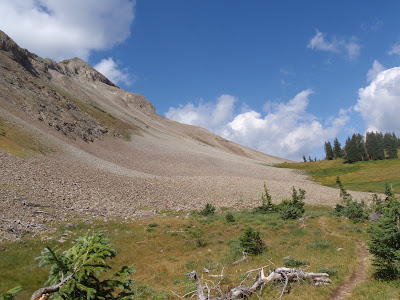 Leaving Hermosa Peak behind, we navigated a narrow rocky ridge where the sun warmed my shoulders and soul. 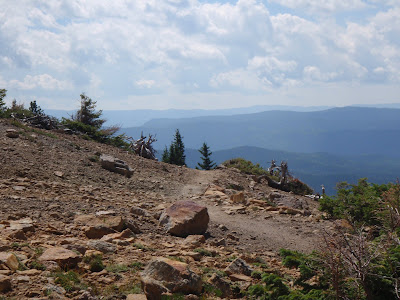 Near this point, we met a pair of through-hikers, a mother-daughter team from Vermont, who had emptied their packs and were drying their gear in the sun. Their spirits seemed low, especially the 13 year-old daughter's. They said that they'd had two cold and wet nights in their tent, and although Durango was drawing near, they felt like an entire continent stood in the way. I struggled to cheer them up but K was amazing. She lay on her back soaking up their pats and love, while sneaking in a snuzzle whenever she could. They thanked me for "letting them play with K", saying that it had made their day.

We continued on our way toward Blackhawk Pass but I kept searching my mind for some small gift or gesture to give them when we passed them again later in the day. I became distracted when our destination, Blackhawk Mountain, appeared towering over a field of yellowing Skunk Cabbage. 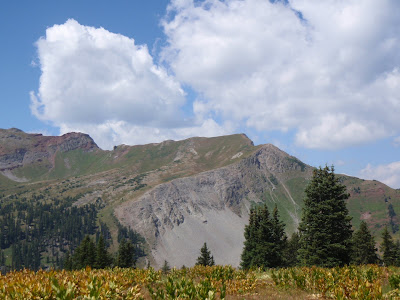 This perfect-gradient trail wove its way toward the pass, never becoming too steep for me to spin my pedals up it. 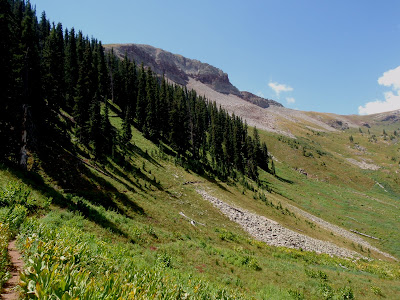 The final approach to the pass, a thin thread paralleling the ridge, seared my lungs but was worth the work. 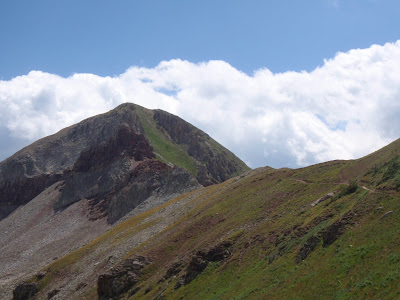 Just like I did, K curiously peered over to the other side of the pass once we stopped. I always feel like a secret world will be unveiled at the top of a pass, and that's a big motivator when the climbing gets steep. 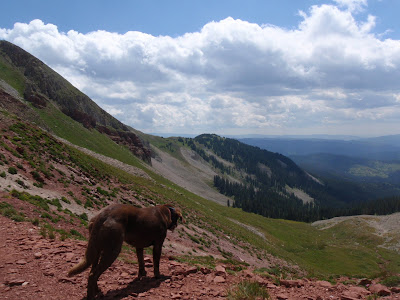 The wind whipped through this low point on the ridge, pinning one of K's ears straight up toward the sky! 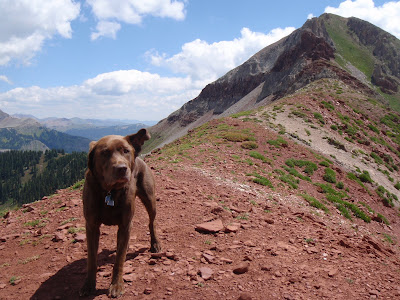 The view back toward our campsite awed me with the multilayered rockface in the foreground, reflecting eons of geological events, and the distant mountains. 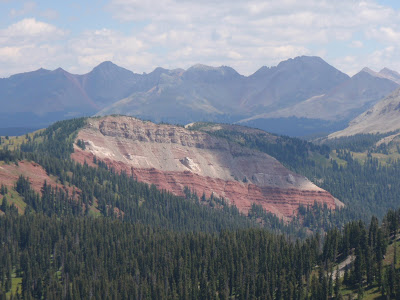 To my delight, columbines raised their faces to soak up the sun near the pass. 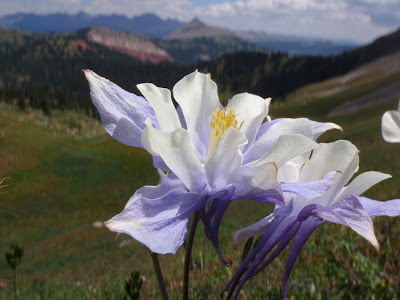 After lingering at the pass, we swooshed and swooped back down toward camp. As we approached the mother-daughter hiking team, I suddenly realized what small token I could give them - my chemical hand and toe warmers that I always carry on mountain rides. The daughter's eyes lit up as she took them. She said that her fingers and toes had gone numb during the last hail storm. I wished them well, and I've thought of them a number of times since then. What an amazing gift for a mother to give her daughter - while teaching her the important lesson that we 'girls' can do anything that we put our minds to.

As we approached camp, K enthusiastically dove into Celebration Lake. The lake was still deserted so she could play with abandon. 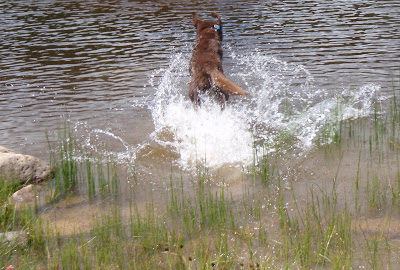 Then, she and her brother baked in the sun at our campsite with an awesome view behind them. 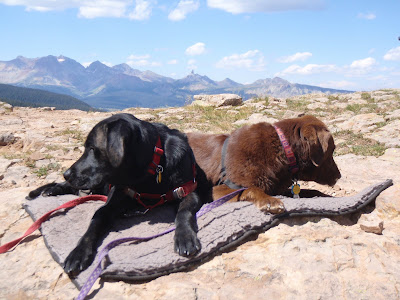 We relaxed in camp, watching the mountains morph as the sun sunk toward the western horizon. 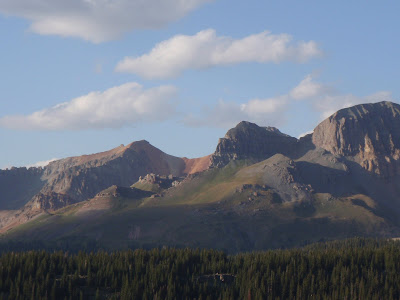 Finally, just before dusk, a nearby mountain glowed orange - a gorgeous ending to our day. 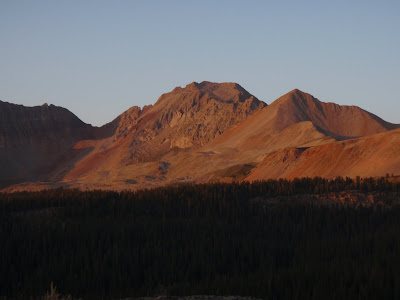