A nearby mountain oasis - James Peak

Our fortnight of camping passed in the blink of an eye. But, we had adventures all over the state, from sleeping every night over 10,000 ft elevation to getting lost (literally) on the Continental Divide in southwest Colorado when my slightly outdated map led me astray.

Our trip started close to home in the James Peak Area. I'd tweaked my easily injured neck while packing for the trip so we decided to drive less than an hour before our first stop. We arrived at sunset. 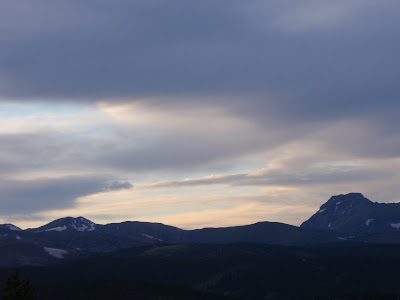 As we ate dinner in the fading light of dusk, an imposing owl with an awesome wingspan swooped from the forest edge and skimmed over our heads. As we sat in awe, he swooped again and again before moving on to better hunting grounds.

James Peak towers over my home area, reaching more than 13,000 ft above sea level. I see this rocky mountain daily. On today's mountain bike ride, the thunderstorms that nipped at my heels originated from its general direction. 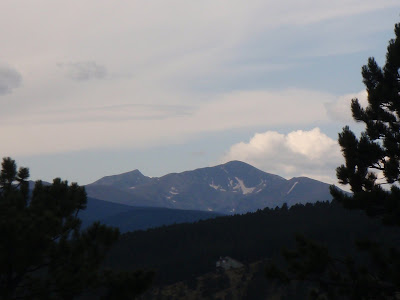 On that first day of our vacation, I rode my mountain bike with K, mostly on 4wd roads, while my husband and R ran on singletrack trails that are closed to bikes due to the Wilderness Act. As I climbed upward on tough roads, churned by motor-driven tires to such an extent that my back wheel spun uselessly even on gradual slopes, James Peak soared in the bluebird sky. 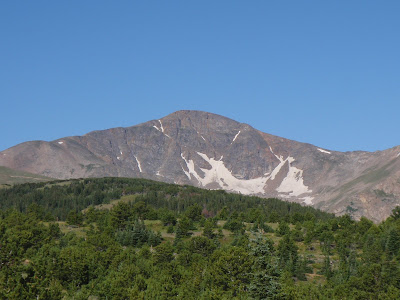 In my opinion, one of the mistakes in the Wilderness Act is that it lumps human-powered bikes with motorcycles and ATVs. I have no choice but to ride on motor-dominated trails that are so eroded and filled with loose gravel and rocks that I can barely make forward progress up a hill.

However, on that day, the pure crystal beauty of the mountains and our excitement about starting our adventure outweighed all complaints. Because it was a weekday, solitude was easy to find. K and I met the boys (my husband and R) at a trail intersection where they'd just run up from a lake. 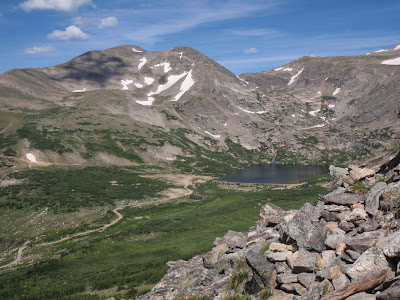 K ran down to meet them and then popped over the rise. 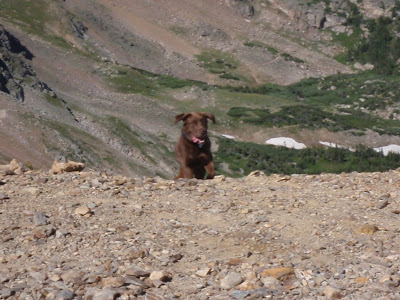 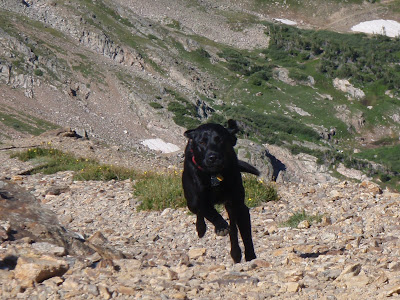 Since I planned to take K on a long adventurous ride the next day, I sent her back to camp to rest with the boys while I explored further.

To my surprise, as I rolled along an ATV trail, I saw gnarled and ancient-looking trees leaning crookedly but still standing next to the trail - Bristlecone Pine Trees! They stood in an immense plateau surrounded by towering mountains, an undoubtedly harsh, windswept, and frigid spot in the winter. These trees can live for thousands of years and grow incredibly slowly, less than 0.001" in diameter per year in difficult times. In a harsh environment, any Bristlecone Pine over 5 feet tall is probably more than 500 years old, according to my books. Imagine, the tree in the photo below might have stood in that spot back in the 1500's. I'm utterly amazed that they've endured the abuse of ATVs roaring past them in recent years. 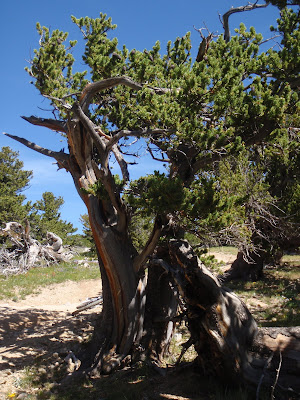 The newly formed cones had needle-like bristles spiking outward from the purple scales. 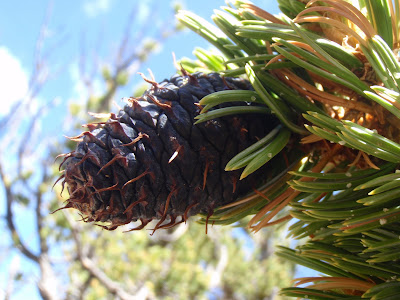 As I rode further, I saw that the wildflowers, still in full cry, formed pastel paintings in front of the craggy and snowy mountains. Here, a Bistort, tinted pink by a long season of blooming, towers over carpets of yellow Alpine Avens with James Peak as a backdrop. 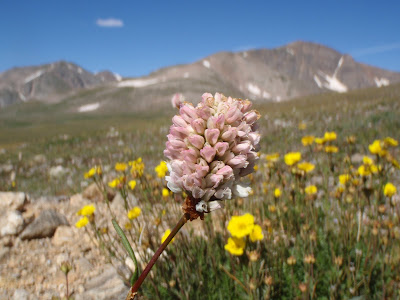 In a wet section of tundra, Queen's Crown (Clementsia rhodantha), slightly faded after a summer of song, hosted a bumblebee. 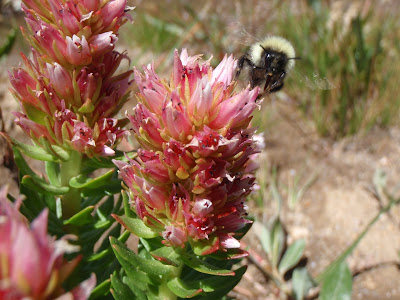 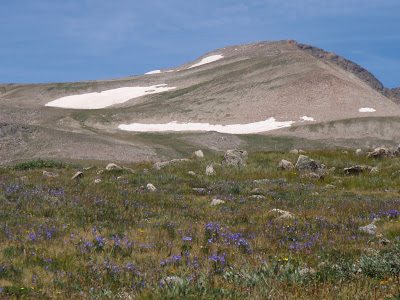 Clumps of yellow asters lined the trails and Rocky Mountain Parnassian butterflies flitted among them. A male drank nectar from a yellow gem. 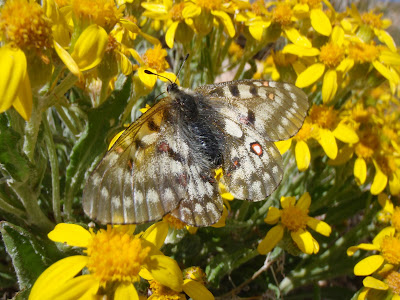 After spotting the butterfly, to loop back to camp, I tried to take an adventurous 'shortcut' on a non-motorized (i.e., motorized travel not allowed). After strenuously climbing to a saddle between two peaks, I realized that my old map, created before this area became an official 'wilderness area', had led me astray. The trail I sought no longer existed. And, because my GPS sat safely locked in our van, I didn't have any guidance for a cross-country short-cut.

Eventually, I turned back, retracing my original route, and arriving back at camp later than anyone expected. This misguided meandering in the wilderness wasn't an isolated event, as you'll read when I post about later parts of the trip. I think that I need to get a 'real' GPS, rather than my outdated one that's designed for runners to log their mileage and pace.

But, sometimes while I was lost on this vacation, I saw things that I would've otherwise missed. In this case, my wandering let me gaze at faraway mountain oases that we'd be exploring later in the trip. 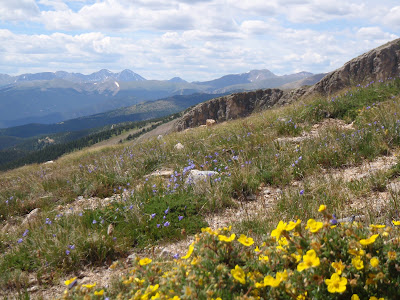 I also stumbled upon a harbinger of autumn, a member of the Gentian plant family. All the Colorado Gentian species bloom in the waning days of summer. The Arctic Gentians that I saw near James Peak bloom only in the grassy meadows of the alpine tundra. They're compact, standing only about 6" tall, but their large flashy blossoms bring one of the last floral outbursts to the thin air of the tundra. 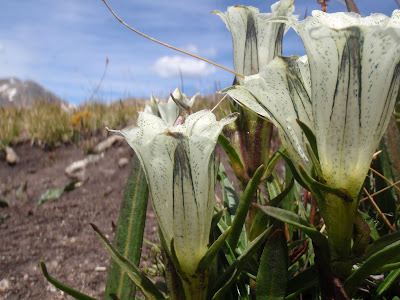 All Gentian species, including the Arctic Gentian, deftly close their petals in rapid response to clouds and cooling. This undoubtedly protects their vital reproductive organs, tucked deep within the petals, from the cold. This ability probably helps them to flourish when other wildflowers wane due to the frosty late summer nights. 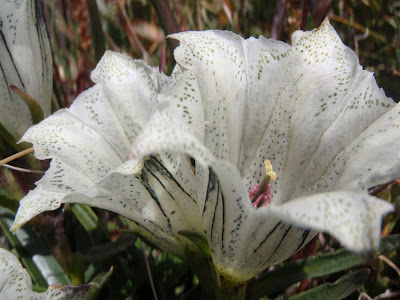 When I finally wound my way back to camp, we immediately set out toward our ultimate destination of the San Juan Mountains of southwest Colorado. However, due to my chronic spine pain, we always break our trips into short legs, with our favorite mountain spots as our layovers. Thus, on that first day of vacation, we headed toward Monarch Pass and its awe-inspiring alpine trails.
Posted by KB at 5:37 PM