A restful day at Carson Pass

We spent another day at Carson Pass. R, our tenderfooted youngster, acted lame within hours after our high altitude adventure the previous day. I spent the day stewing, worried sick that he might have injured his surgically repaired elbow. Alas, for once, my fears were wrong. His still soft paw pads were causing him pain, and a set of boots enabled him to go for a short walk.

It's always so funny to watch a dog when he's getting used to boots. The video below shows his drunken walking and a brief strike when we first put the boots on his paws.

His paws felt much better by the next day but he kept wearing boots for rocky trail runs over the rest of the vacation.

After the terrifying and jolting ride up to our campsite, I'd come up with a plan to avoid riding in our van down the shelf-like gulch road the next morning. K and I would mountain bike what I believed was a short leg of the Colorado Trail and meet the boys at the next trailhead. I had two guidebooks and a topo map, all of which agreed that the route included a short 1000' climb and then gradually descended next to a creek. Sounded perfect to me!

Little did I know that the trail had recently been relocated. I had, bar none, the hardest day ever on a bike as I struggled along the Continental Divide, climbing endlessly, to make it to the next trailhead. We traveled through incredible peaks, staying in the thin air near the top of the Divide for most of the day. We finally made it to the next trailhead, only to discover that it wasn't the trailhead where my husband planned to meet us. To top it off, cell phone reception was nil. Uh oh. 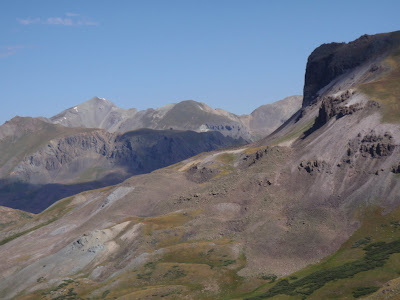 We did stop to have some fun along the way. 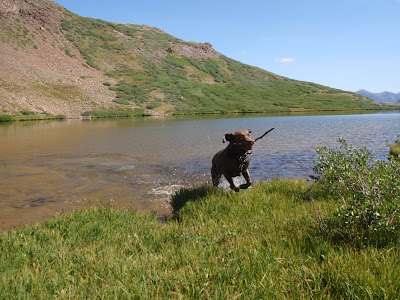