The world is changing day-by-day, with summer birds departing, migrating birds passing through, the grass turning golden, wildflowers going to seed, and a smattering of aspen leaves tinting yellow. 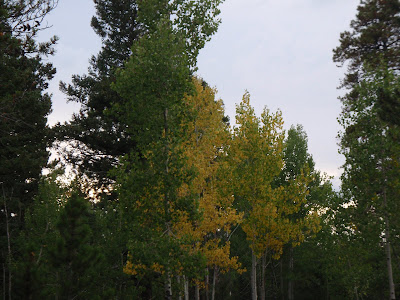 Another rite of autumn is that our beef order form arrived. A herd of heifers has grazed within our sight all summer long. Believe it or not, we buy one every year to feed our dogs. As a puppy, K had seemingly unresolvable digestive distress and was growing too slowly. We tried every commercial food imaginable. With each vet consultation, my vet would quietly suggest that I try making homemade food because she'd seen a few puppies who could only thrive on a simple homemade diet. Finally, in desperation, I tried it. Almost instantly, K began to thrive, and I've been cooking her food ever since.

We buy grass-fed completely natural beef from our across-the-meadow neighbors, and I use a formula given to me by my vet that specifies the proportions of protein, carbs, and veggies. In addition, the vet has a specific list of supplements that dogs on homemade diets need. I make a huge pot of food about once a week, and it's become an easy routine. Not as easy as buying kibble - but I feel secure knowing exactly what my dogs are eating, especially after that horrible dogfood recall fiasco a couple of years ago.

The hardest part for me is watching the young cattle graze idyllically all summer, knowing that my dogs will eventually eat one of them. At least I know that they had a peaceful and easy existence before becoming beef. You can barely see them under towering James Peak in the photo below. 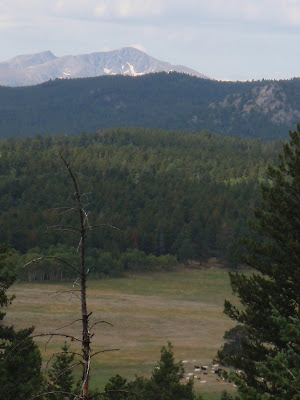 On the day that the beef order form appeared in the mailbox, the herd had congregated almost next to my mailbox to visually remind of what the form meant. 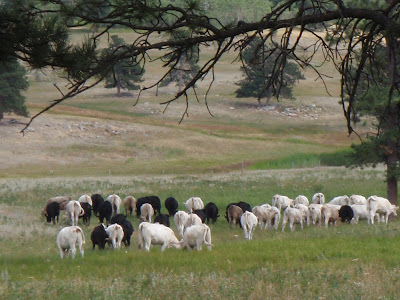 And, further dog health news... As usually happens once we increase K's thyroid medicine after her fear escalates, her courage is improving noticeably each day. She's less afraid of doorways with the exception of the the screen door. It wasn't open widely enough for her earlier today, and she stood paralyzed with her paws glued to the deck. When she's 'normal', she uses her nose to open it further and comes in without my help. 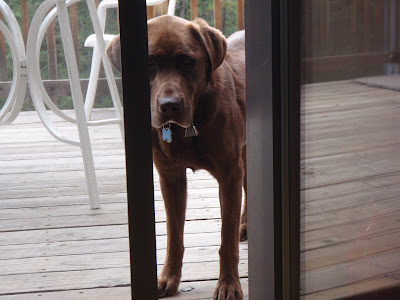 Today, I had the Lab duo as my mountain biking companions again. At one point during the ride, K forged ahead with her brother. It was the first time that she'd emerged from her post behind me since this fear episode started. Sorry for the blur but everything in R's vicinity moves at a blur-inducing pace! 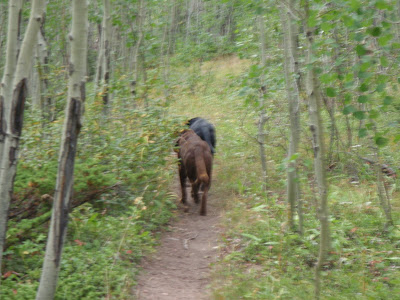 To avoid running into the out-of-control dog pack whose behavior I described yesterday, we sprinted straight up the mountainside at the start of our ride. In my hurry to flee the sound of the pack's barking, I barged right into a berry-rich area that we've been avoiding so that the bears can forage in peace. It was our lucky day - no bears!

The dogs did a sit-stay on top of our peak with the misty Divide behind them and the other trailusers now far below us. It never fails - if I want solitude, I need to find the steepest and toughest hill to climb. 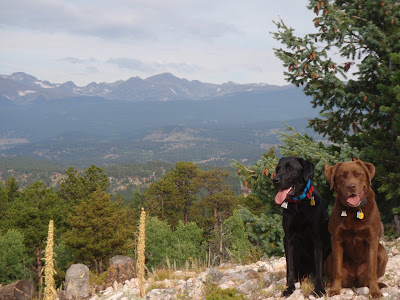 After dropping off the duo, I pedaled to the east, and a female Blue Grouse watched me pass by. She didn't flee, very odd, making me wonder if her young were nearby. The brood usually stays with their mother into September. 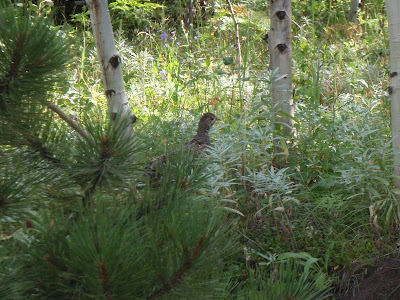 As I rode, clouds crept over a ridge from the east as I climbed. A chill permeated the air. Fall is coming! 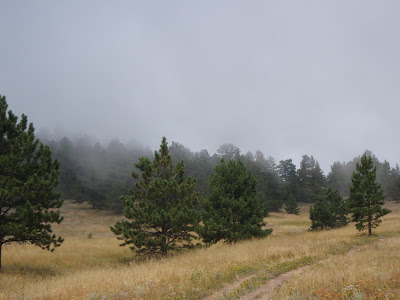 From the top of the ridge, I could still see the mountains peeking through the pine trees. 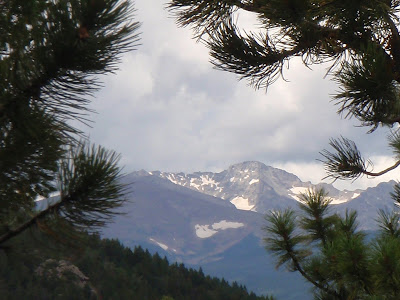 When I rolled down the steep forested slope to the west, I found bevies of raspberries. I love wild raspberries so I stopped for a long break, foraging like a bear. I started thinking about how hard a black bear must work to eat enough berries to build a layer of fat for the winter. I literally can't imagine picking berries one-by-one, eating them, and actually having a caloric excess to store as fat. Based on some quick research, I'm guessing that each tiny wild raspberry has about 1 Calorie so I'd have to eat 3500 raspberries to gain a pound of fat - and that calculation doesn't account for the energy that I'd expend gathering the raspberries. I'm amazed that bears can survive! 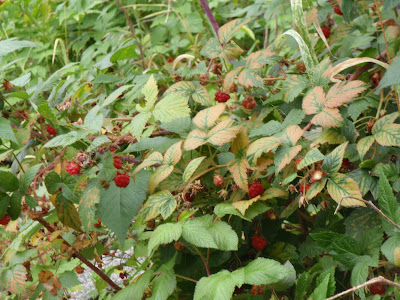 As I ate berries, the clouds moved around me, engulfing my world in a mystical aura. A few Coneflowers still bloomed, glowing like beacons in the darkening sky. 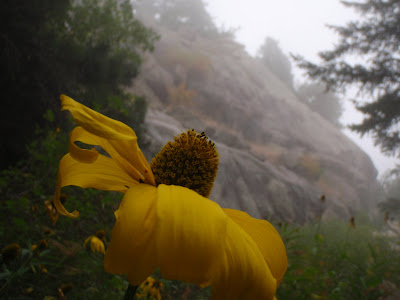 I spun home, feeling happy after a relaxing ride in my forest!
Posted by KB at 5:40 PM