Before I launch into tales of my vacation adventures, I thought that I'd give you a picture of the extreme behavioral effects of thyroid imbalances. Yesterday afternoon, K and I started an agility run - we usually spend about 10 minutes a day 'playing' agility on our homemade course. She usually gets so excited to play that she shakes.

Yesterday was different. She didn't sprint out of the blocks. She did the first few obstacles and then slowed down like a wind-up toy who was running out of oomph. Her body language screamed terror - pure fear seemed to course through her veins. She dug in her heels about the 'pause table', a table on which she usually does a brief down during a run. It's the least scary obstacle on the course. For K, the 'pause table' seemed to be the last straw, and she refused to try any more of her beloved agility course.

I've seen almost exactly this sequence of events in the past when her thyroid has gone askew. Previously, I've made the mistake of trying to counteract her fear with treats and other techniques. My attempts have never worked so we simply walked away yesterday. To try to prevent her from dwelling on her fear, we did a few non-agility tricks on our way inside.

Then, after darkness fell, K kept getting 'stuck' in various rooms because she was afraid of the doorways and hallways. She'd move through them if a human accompanied her but not by herself. I talked with K's vet today, and we're immediately changing her thyroid meds even though the blood work won't be back until next week. We might call in a specialist if things don't even out soon.

The point in this story is that if your dog suddenly becomes fearful, always consider that the cause might be medical. And, a lot of vets don't know about the behavior-thyroid link so be sure to mention it. 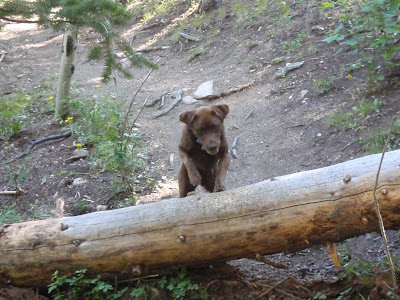 After our fun and epic days on the Colorado Trail between Carson and Stony Passes, we headed into Silverton, and enjoyed hot showers and pizza! We walked the dogs around the quaint and tourist-oriented town. At some flowers outside a shop, a hummingbird-like form caught my eye but I rapidly realized that it wasn't a bird - it was a Hawkmoth. I don't know the species but if anyone else recognizes it, please tell me!

At a glance, these moths mimic hummingbirds in body shape and flying style. This striped moth zeroed in on a red columbine. First, he stuck his long and lithe tongue out to sample the nectar. If you click on the photo, you enlarge it, making it easier to see the details. Sorry about the blurriness - it was a gloomy evening and the moth moved fast! But, I think that you can see the thread-like red tongue going from the moth's 'beak' to the flower. 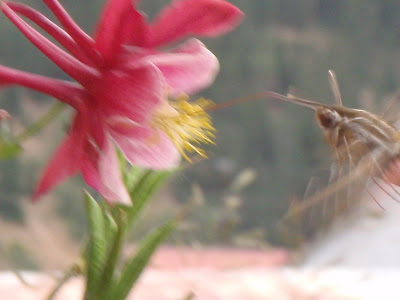 After hovering briefly, he moved in closer. 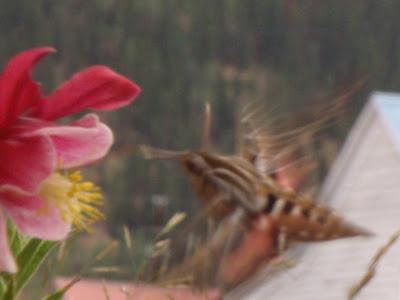 And finally, the flower almost engulfed him as he drank the nectar. 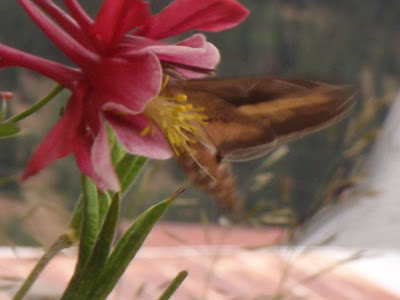 I had to laugh - even as we'd been trying to be 'civilized' in a town for a brief time, we'd ended up engrossed in a wonder of nature. I don't think that cities were made for us or vice versa!

We headed a short way out of town, onto a road that climbed next to Mineral Creek. After the road turned rough, keeping traffic to a minimum, we found a campsite with a view of the creek, mountains, and mist that floated up towards us. 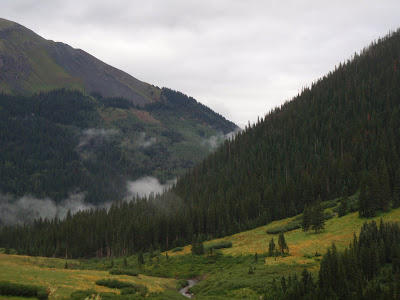 Exhausted, we went straight to sleep. One of things that I love about our van (aka 'The Labmobile' or more officially, a 'Sportsmobile') is how easy it is to set up camp and how comfortable the bed is. On this trip, my back fell in love with our 4WD van. No camping mattress compares.

When we finally awakened the next morning, the clouds were oozing up the valley toward us. 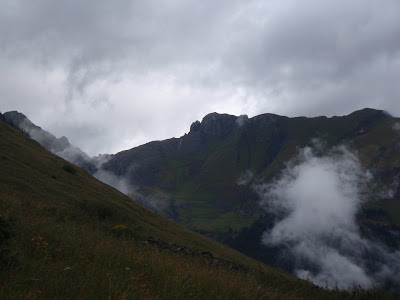 We decided that we all needed to take it easy for the day. In our high-energy world, 'taking it easy' meant that K joined the boys for a short run, and I headed out alone for a short mountain bike ride. I rode up, and I do mean 'up', the Rico-Silverton Trail which eventually would have intersected my favorite trail, The Colorado Trail.

The trail meandered next to creek that cut through what felt like an old growth conifer forest, replete with massive Engleman Spruce, Blue Spruce, and Subalpine Fir trees. We'd read that this area might be home for some reintroduced lynx, and it felt like perfect habitat for the shy cats.

Purple and towering subalpine Larkspur lined the trail, and I heard the buzz of hummingbirds among them. 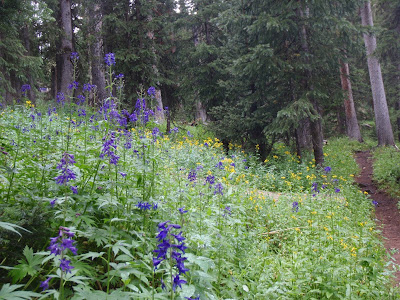 Without too much effort, I emerged onto an expansive meadow, still vibrating with summer energy despite the damp and chilly day. Talus slopes formed walls for the meadow. Marmots whistled and pikas chirped as I passed by. 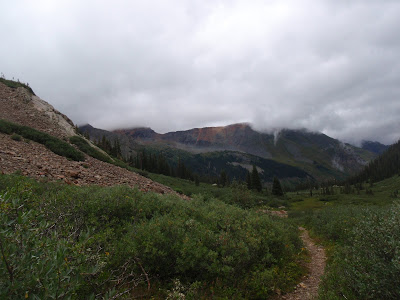 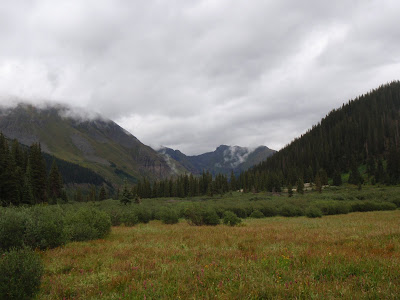 And, my favorite flower on Earth, the Colorado Columbine, still bloomed. 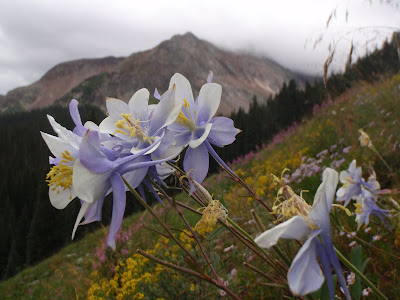 I could see my dream destination ahead of me - an exposed ridge and the trail that I knew snaked along its apex. However, the clouds threatened to engulf me and I'd promised to take it easy, so I turned back toward the warmth of camp.

Down close to camp, I noticed brilliant purple-blue flower, flourishing in a moist and sunny spot, that was new to me. Its shape and skunky smell reminded me of a Sky Pilot or Jacob's Ladder, both of which were ubiquitous during our early summer mountain excursions. However, it was much taller, and its flowers subtly differed from its cousins' flowers. It was a "Leafy Jacob's Ladder" (Polemonium foliosissimum), a much taller and more sun-loving species than the "Showy Jacob's Ladder" that I often see in shady and moist mountain areas. 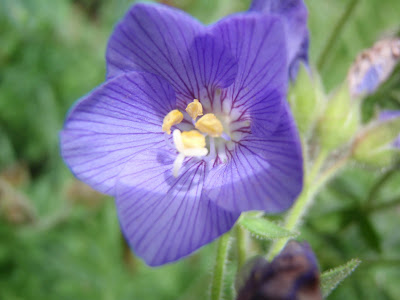 Apparently, the skunk-like smell of this group of flowers deters ants and other "nectar-stealing insects". My books don't say why deterring ants is important but I'd guess that they don't often carry pollen from one plant to another so they're less desirable visitors than flying insects or birds.

Shortly after I finished my ride, the clouds marched directly at us and the rain pelted out of the sky. I was glad that I'd kept my ride short!

For our final San Juan campsite, we drove up to Bolam Pass, another Colorado Trail access point, on yet another 4WD road. This one was mellow compared to the terrifying ride up Wager Gulch to Carson Pass. Just before the Pass, a magical lake, "Celebration Lake", emerged from the mist. 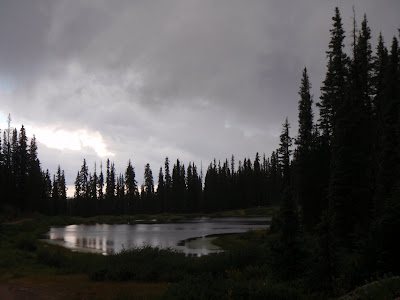 We found a campsite with a spectacular view - although an aerial bombardment of hail was underway when we arrived. We waited out nature's fury, listening to the pounding of hail, in the Labmobile. We talked about the tough 'through-hikers' who we'd seen in recent days, traveling all the way from Denver to Durango on the Colorado Trail. We guessed that they were huddled in tents to survive this onslaught - we felt like wimps by comparison.

When the storm's fury was spent, my husband ventured out, clad in arctic gear, to start dinner. Although the van has a stove, we both prefer being outdoors whenever we can. He's the cook in our family - thank goodness - or we'd be malnourished! 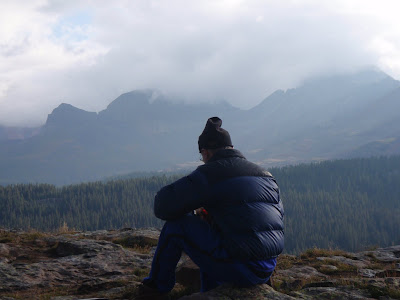 The arctic clothing fit the ambiance - fresh snow dusted a nearby peak! 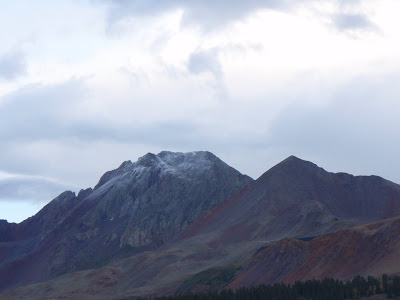 While my husband cooked, I walked and fed the dogs, enjoying our solitude in this glorious spot. 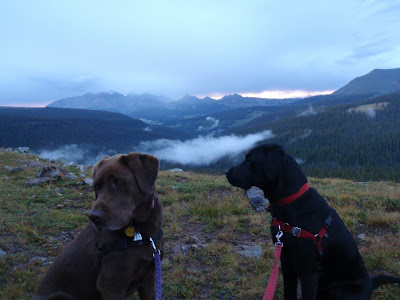 And, for the umpteenth time on this vacation, I felt grateful to be in the thin air of our awesome mountains - up so high that I looked down on the clouds. 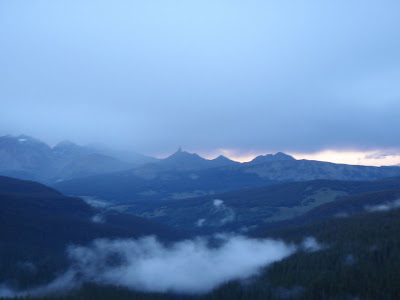