Wildlife visits, a ride with the duo, & vacation adventure

Nary an animal ventured past our wildlife camera while we were on vacation. Since returning, we've had a parade of visitors.

A Black Bear lumbered under our bearproof birdfeeding station. I think that he might be a newcomer to the area because he doesn't fit the descriptions of any of the other ursines we've seen or photographed. Perhaps he's a yearling and is on the journey of his life, searching for his own territory. While he visited, he tested our year-old bearproof garbage can, rolling it 10 yards and grappling with it, but it passed the test. It's the first one that's worked for us so we're ready to recommend it if you live in bear (or raccoon) territory. Their website seems to be down today but I hope it's up soon. 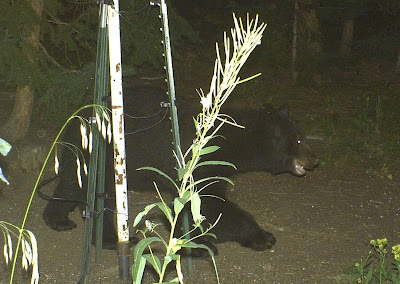 A lithe red fox has danced across our wildlife camera's view three times in the past week. I wonder if this fox is a youngster who is now dispersing from his parents and siblings. Unlike coyotes and wolves who usually live in packs, foxes live solitary lives except during breeding and pup-raising times. Like the bear shown above, he may be traveling to find his own territory. 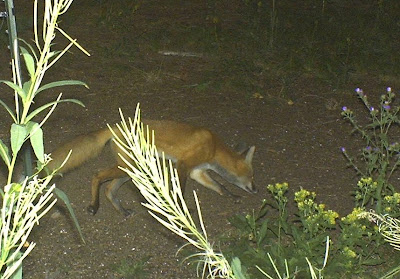 Today, the glory of the Colorado mountains is shining with sunshine and blue skies. I took both canines with me on my mountain bike ride. R's energy astounded me as he streaked from one side of the trail to another. Moreover, he proved himself to be a tailgater of the worst sort. On narrow sections of trail, he'd hover just behind my back wheel, panting loudly, while trying to find an iota of space to squeeze past me. The good news was that he's showing signs of learning to be patient. Although he neglected to use a turn signal before passing, he waited for reasonably safe places before zooming around me.

As I mulled over R's lack of fear of my bike, I realized that he's never seen one of my dramatic crashes. K has seen me launched over the handlebars and landing in a tangle of bushes or a pile of rocks. I think that's why she gives me space but R still tends to crowd me. Perhaps I should stage a crash for him!

During our ride, my heart lifted when I saw K zipping through the forest with R a few times - perhaps she's starting to feel better.

At one point in the ride, I thought that R's intensity and excitement were approaching a full boil so I took a break to do some calm-inducing training. R showed his burgeoning maturity as he found the fortitude to hold a sit despite his sky-high excitement. 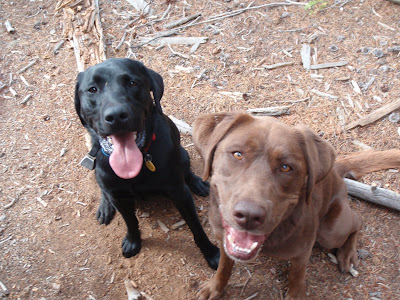 Then, because R was exceeding expectations, I asked for a down-stay while I wandered aimlessly around to test his mettle. The boy must be growing up because he didn't even fidget! 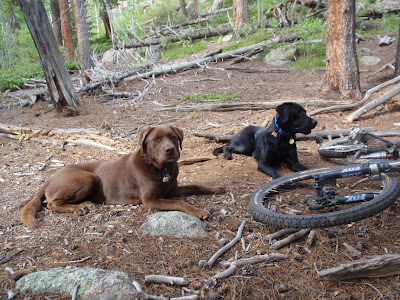 After our ride, I headed out for some solo riding, and when I returned home, I saw the heart-warming sight that's been greeting me over the past month or so. Although K had her choice of any dog bed in the house, she chose to lie on a thin piece of carpet next to her brother's crate. This is a major habit change for her. When S was alive, she and S would snooze on the Deluxe dog beds in the living room while R stayed by himself in his crate in the bedroom. I think that K and R are forming a stronger bond. 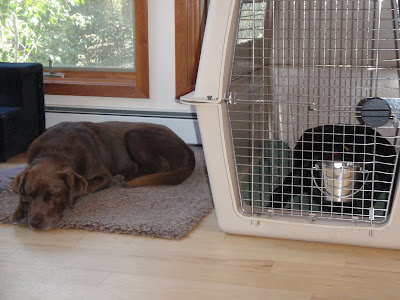 On our last night at Bolam Pass, my husband suggested that I do a point-to-point mountain bike ride and meet him down at the highway. My jaw dropped. The thought literally hadn't crossed my mind after the debacle earlier in the vacation. But, I love point-to-point rides (no retracing my steps) so I started reading the guidebooks and perusing the maps. As far as I could tell, the riding and navigation looked easy. I'd take the Colorado Trail toward Durango and then descend to the highway on a 4WD road that followed Scotch Creek.

I hemmed and hawed. I honestly feared a repeat of our last attempt. Finally, I decided to seize the day and take the risk. In that spirit, I departed camp solo the next morning. The dogs barely noticed me glide away as they obsessed over a scent in the wind. 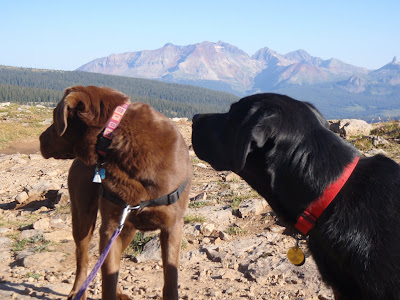 As I started climbing up the trail, a jagged ridge towered over me, making me feel like an inconsequential speck in the universe. 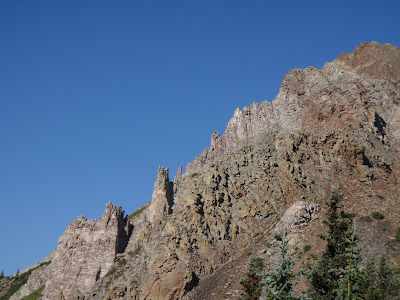 I skirted jumbles of boulders on the flanks of a mountain. 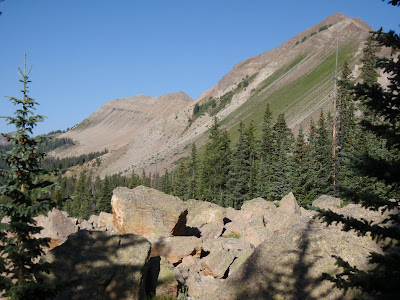 Across a mountain meadow, barren peaks loomed, including a rock pinnacle known as the "Lizard Head". After looking at it many times from different angles, it still doesn't resemble a lizard head, as far as I can tell. 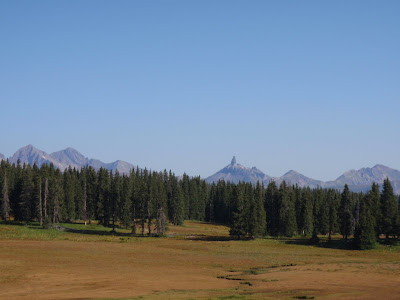 Although the meadows looked more golden than green with every passing day, a few bedraggled wildflowers believed that summer lived on. 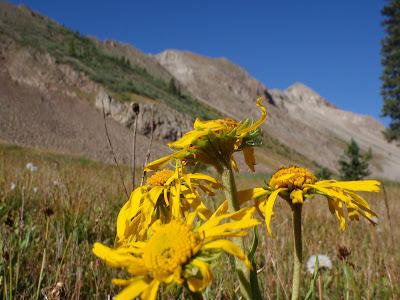 As I rode through a forested section, a rock began to waddle in front of me. I looked again - oops, not a rock but a White-tailed Ptarmigan! In fact, a whole brood of young ptarmigans walked awkwardly to move out of my way. 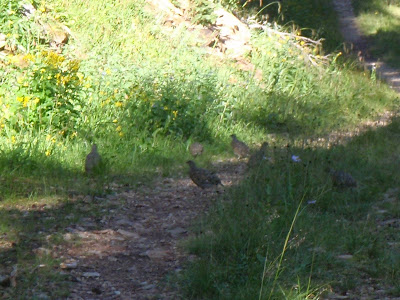 The plumage of Ptarmigans lets them blend in with the mountain terrain. They're not agile fliers so camouflage helps keep them safe. I might not have noticed this bird if he hadn't been on the trail before scrambling up the slope. 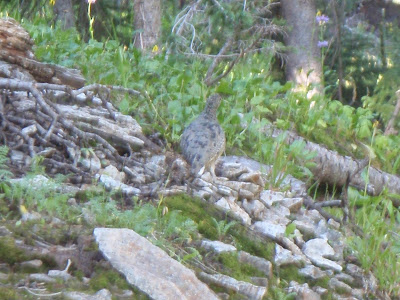 From the front, they're speckled and freckled! 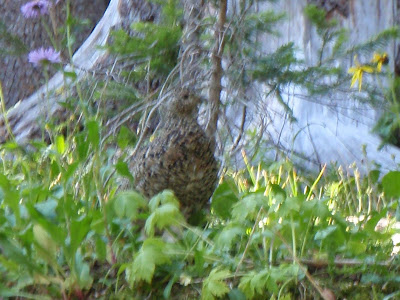 These birds spend the entire year in the alpine tundra. Their feathers turn snow white for the winter. The photo is from Janet Gellhorn's book, "Song of the Alpine". 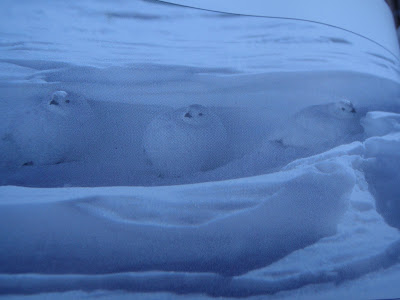 Ptarmigans survive alpine winters by digging down into the snow and roosting within its insulating depths - much like a human in a snow cave (I've spent the night in one, and it was surprisingly warm). Mortality skyrockets in years with little snow because the ptarmigans are forced to remain exposed to the frigid and often windy mountain air. In the winter, they eat the buds from exposed willow branches or they dig down into the powder to find the branches. Unbelievably, ptarmigans gain weight over the winter, reaching their fattest point in April, just before breeding. I felt lucky to have a prolonged time to watch these astonishing birds.

After enjoying the ptarmigans, I climbed up to a pass, still adorned with wildflowers. 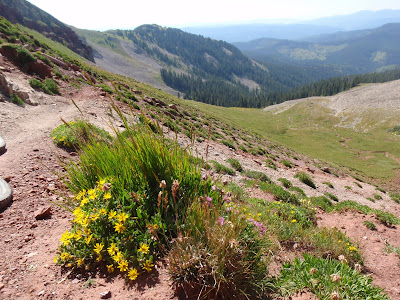 I gazed at the rest of my route, all downhill toward the lower elevation hills. It made me sad to descend from the alpine world, knowing that our vacation was winding down. 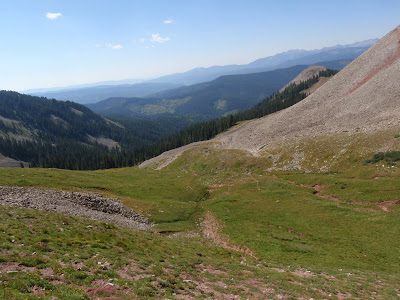 As I enjoyed swooshing down this smooth and curvy trail, I passed through a meadow still humming with the brilliance of summer. 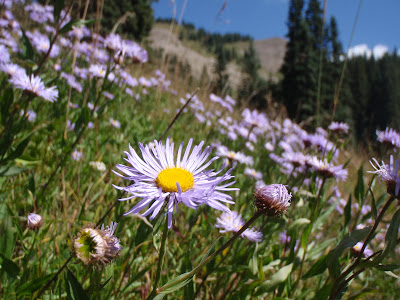 I looked over my shoulder, again and again, to catch glimpses of the high alpine pass that I'd just crossed. 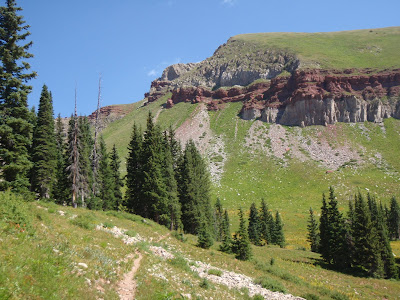 As the air thickened and became warmer at lower elevations, bright fireweed flowers smashed into my consciousness. They towered beside the trails. 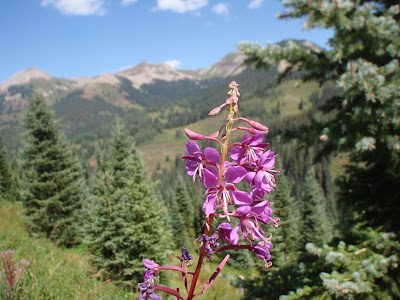 Finally, one last glance at 'my alpine pass' which was slipping out of my grasp and view. Descending gave me a sinking feeling that summer was ending. 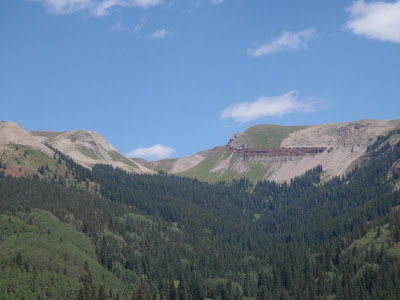 As I rode next to the creek toward the highway, I realized that I hadn't seen another human over my whole ride. It wasn't until I reached this dramatic canyon less than a mile from the paved road that I met my first human of the day. I love solitude on the trails! 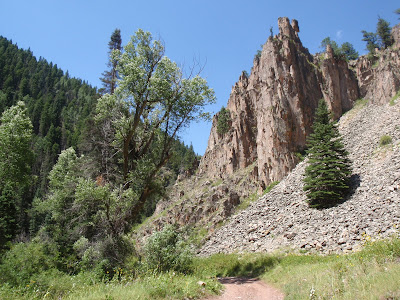 I met the rest of my pack at the van, exactly where and when we'd planned - a small triumph for this often-lost mountain biker!
Posted by KB at 6:14 PM