I've been spoiled over the past weeks of endless sunshine and comfortably warm air. I've rolled out on my mountain bike each morning in shorts and a jersey without a worry about the weather turning nasty.

Yesterday, it was obvious that change was on the way starting with the ominous clouds billowing around the lofty peaks behind K in this photo. 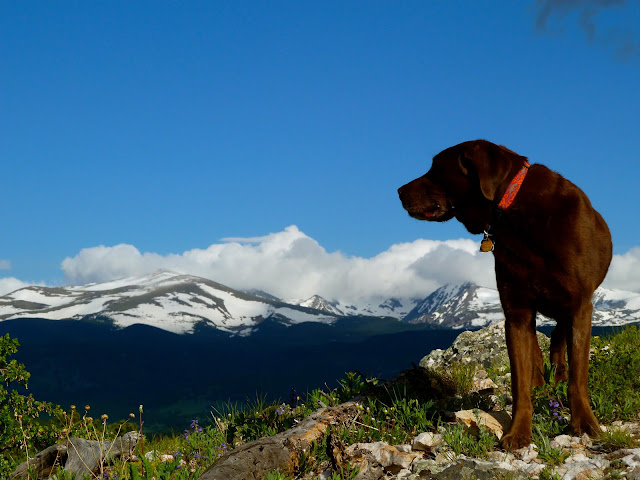 Last night, torrential rains started, pounding on our metal roof like a million woodpeckers announcing their territory. The sound continued through the night. When I woke up, it was 36°F and raining - perfect hypothermia weather.

I found many ways to procrastinate about starting my mountain bike ride - switching petals between bikes, installing new cleats on my gore-tex riding shoes - my creativity knew no bounds. It was a very rare occasion when procrastination actually helped. The temperature had broken 40°F and the rain had dwindled to a smattering of drops by the time that K and I rolled out the door. She and I did a short ride together before I headed out on my own.

During my solo ride, I saw sun, clouds, torrential rain, and finally sun again. I had forgotten how difficult it is to slog through gloppy mud. My ride took approximately an hour longer than usual for the route, and I was knackered at the end. However, I have to admit that I had a blast. I love seeing the forests and meadows under all sorts of conditions - including overcast skies with rain. And, the wildflowers.... they're stunning with water droplets hanging from them. I hope to share a few photos soon.

I checked some wildlife cameras while I was on my ride, and I captured heart-melting cute video of the doe and her *two* fawns yesterday. I can't upload it due to my terrible internet connection but I hope to soon!

On the wildlife front, this weekend, we witnessed an amazing feat by a bobcat just outside our windows. Below, you can see a photo of a bird house that the squirrels have commandeered. We've decided to let them have it because none of our efforts to deter them have worked - so it's now a very active squirrel house with the rodents coming and going in a bustle. The squirrel house is about 20' off the ground. 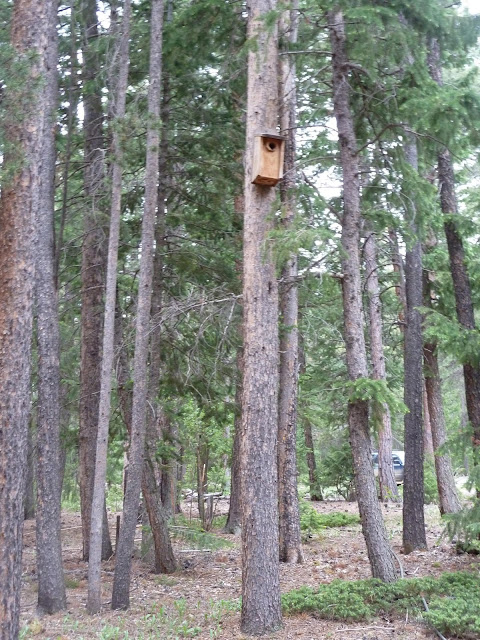 As I was pecking away at my keyboard, I heard the Runner call, "Come quick. There's a bobcat walking down the driveway!". I sprinted, grabbing my camera on the way. By the time I arrived at the window with a view, the bobcat was up in the tree, hanging from the squirrel house. The Runner says that the bobcat leaped vertically about 2/3 of the way up to the squirrel house and then clung to the tree before climbing the last few feet. Sadly, I didn't get a photo of the bobcat in the tree.

Then, the bobcat either accidentally or purposefully, let go of the squirrel house and fell to the ground. Like the cat that he is, he landed on his feet. He stood still for a long moment after landing with his bobbed tail twitching back and forth. Then, the bobcat seemed to zero in on me and Runner standing inside the house watching him. We received a long probing gaze. 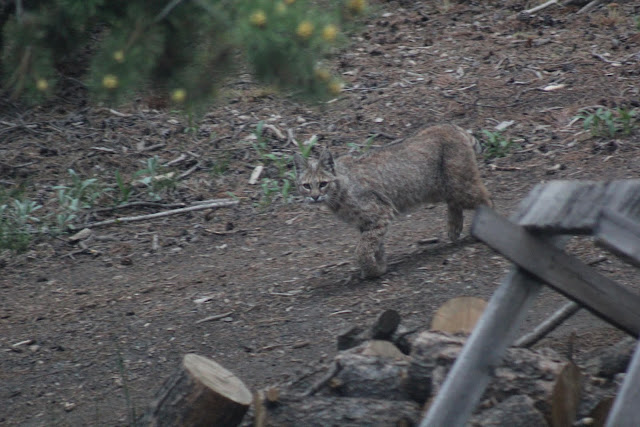 With that, the bobcat moved down our driveway and into the cover of forest. He walked briskly and with purpose but never broke out of a walk. 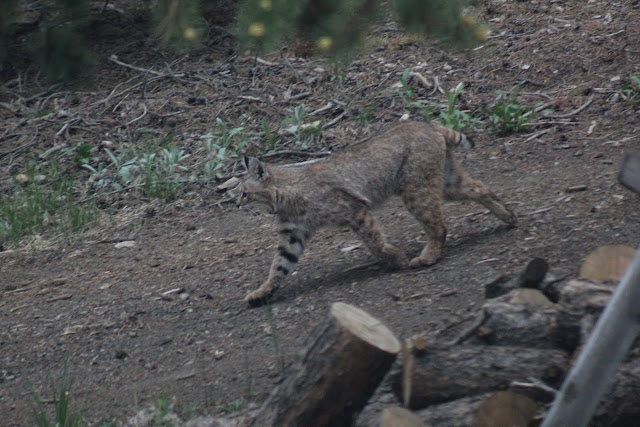 Sometimes I find it amusing that I put wildlife cameras out in the forest to capture interesting behavior by our wild animals yet some of the most fascinating events happen right outside my house. I've never seen a bobcat in a tree before. I'd always wondered how they descend from trees - headfirst or tail-first? I'm still not sure that I know the answer to that last question because the bobcat's sudden descent might have been accidental.

But, one thing that I do know is that cats can jump/fall safely from very high in trees. If I'm ever faced with a mountain lion in a tree again, I'll follow my instincts and hightail it away from the area. Years ago, during a mountain bike ride, K and I were descending from Hug Hill when we came around a curve to find a mountain lion in front of us. Before I could react, K sprinted straight at him, barking ferociously. Because K is still alive, you know that her strategy worked. In fact, the lion went straight up a Lodgepole Pine tree. When I told the story to a mountain lion expert, he said that I would have been safe to peruse the lion after he was treed. After watching the bobcat leap/fall to the ground this weekend, I'm not so sure that it would be safe. I'm glad that K and I fled from the mountain lion in the tree.

That expert also asked if K was available for training as a "lion dog" (K was the perfect age - about 1 year old - for starting training). Apparently, few dogs naturally have the reaction to seeing a lion that K did - and the ones that do turn out to be awesome at treeing mountain lions. Scientists use these dogs so that they can dart a treed lion with a tranquilizer and put a GPS collar on it. I politely told him that K wasn't available for that kind of work. I think that you all know the reasons.

A big reason was that life is already too short - especially a dog's life. 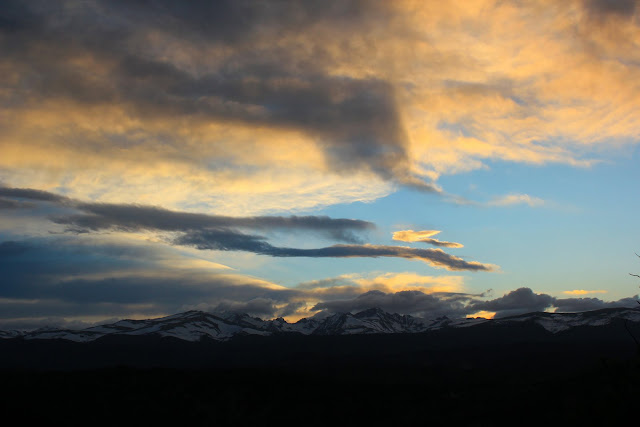