Shyla and I started our day with a snowbike ride in our neck of the woods. She zoomed through green Kinnikinnick just after sunrise. 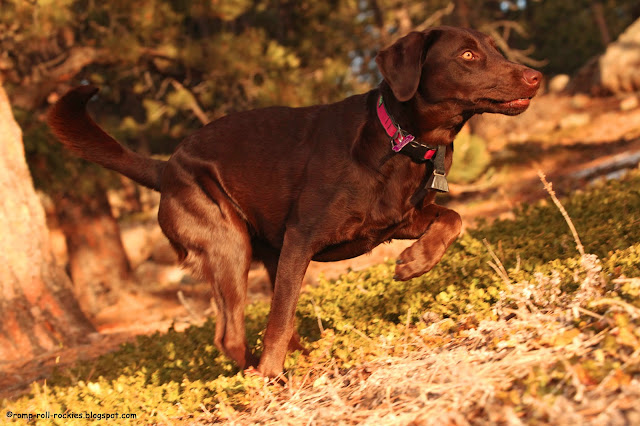 She is so fast and graceful that she astounds me. I can barely keep up with her sometimes but I adore watching her zip back and forth by my bike, covering at least three times the distance that I do.

We pedaled up to Hug Hill where wind fluttered past us. It was a gentle breeze compared some of our winter winds. I played with my "usual lens" and then a 100 mm macro lens that a generous person has loaned to me. The difference was incredible. The colors and detail stunned me with the loaned lens even though I didn't push it toward its "macro" limits even the slightest bit. 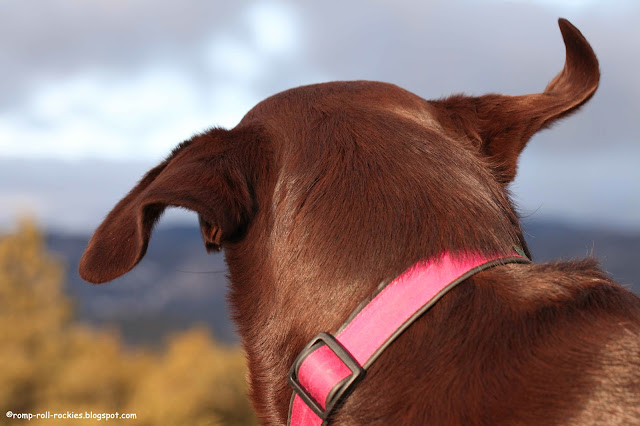 She seemed to enjoy sampling the scents on the wind coming off of the invisible Continental Divide. 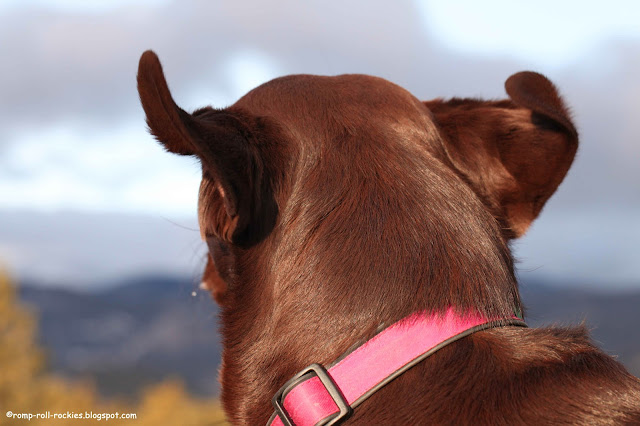 After our ride, I headed out alone to check a trail camera that is posted in a new place for me. I've had a remarkable lack of success with my trail cameras for the past two winters so I decided that it was time to try some "long shot" locations. Last fall, I noticed lots of cat "scrapes" on a certain rocky slope, and I marked the spot with my GPS to post a trail camera there someday. Now, the scrapes are under the snow but many sets of old bobcat tracks pock the area.

As I'd expected, I captured a photo of one of our tenacious bobcats. 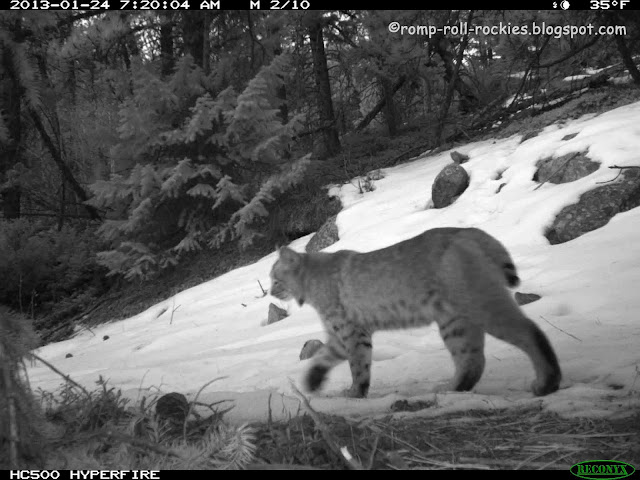 Then, I captured a photo of his quarry, who is still alive and well, as far as I know. 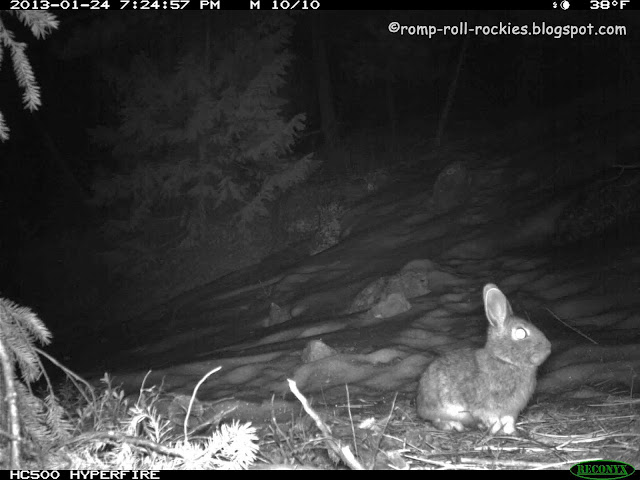 As I checked the trail camera, I stood at the site, scrolling through the photos in chronological order. Right after the rabbit photo, this huge guy appeared hulking in the view finder. I literally jumped. 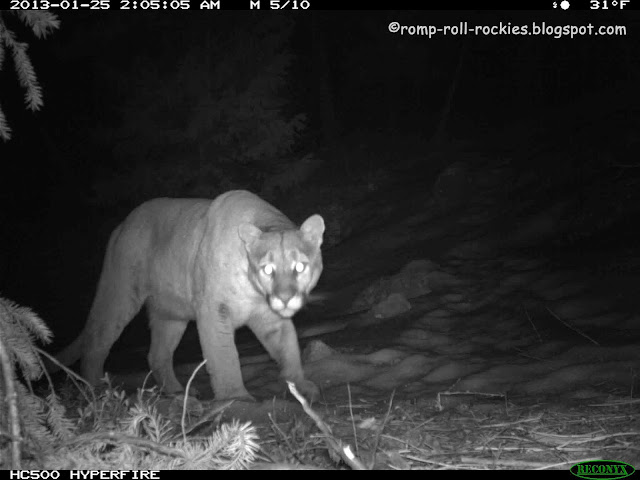 He was very curious about the camera which emits a soft red glow (an infrared "flash") at night. 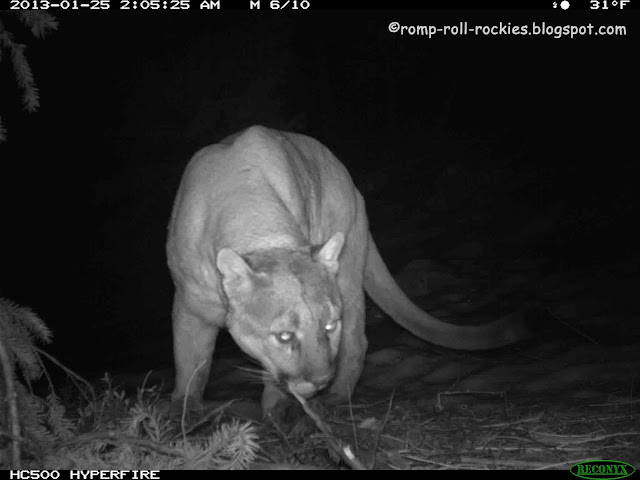 He sniffed the area below the camera, where I kneel when I check it, giving the camera a great view of the furrow in the middle of his forehead. 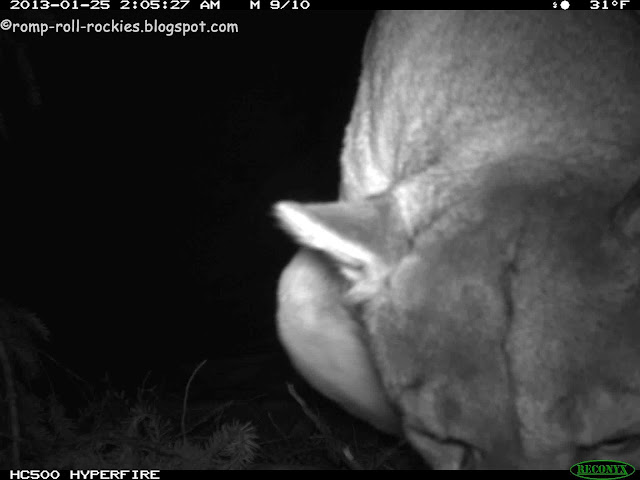 After that, all his body parts including his long tail passed very close to the camera, as he tracked the movements that I'd made when I set up the camera. I could see his tracks today, following mine in the snow.

When he'd finished checking out my scent, he reappeared in front of the camera. He's a bulky and strong mountain lion. You can also see that he recently ate a big meal. His tummy is bulging. 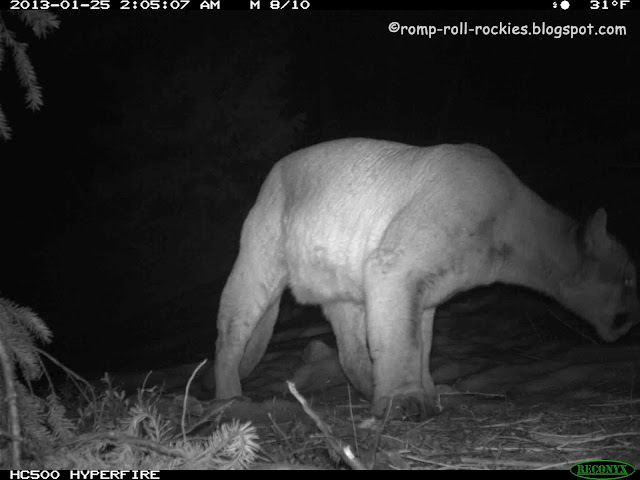 He then examined the area where I know that there are lots of cat scrapes under the snow from my reconnaisance last fall. 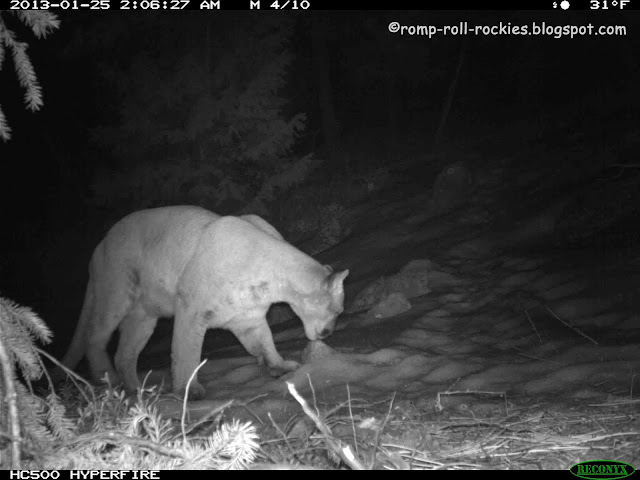 He rolled around in the snow a bit, like a lion whom we followed last fall, making me wonder if it's the same one. I'd never seen this behavior until last fall. 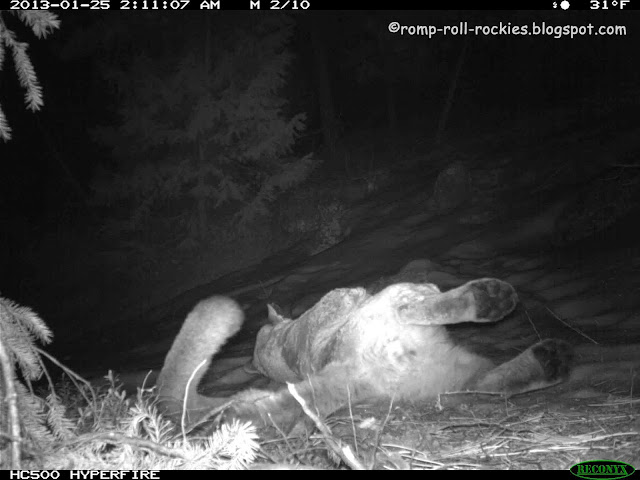 Then, he prepared to leave, pausing stock still for a moment. 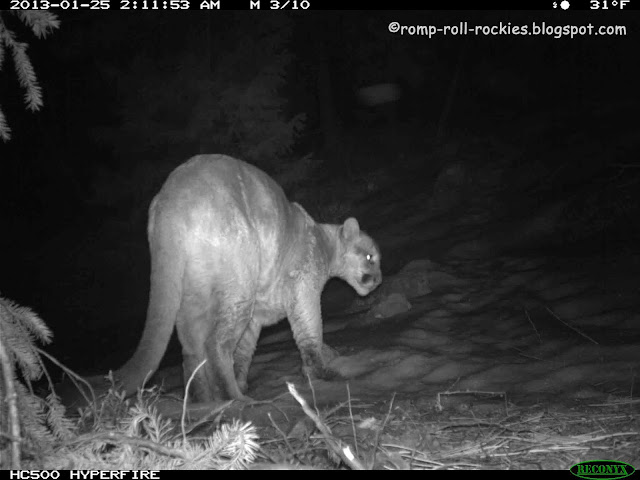 Then, just like that, he vanished like a ghost - a giant predator who lives all around us but somehow remains invisible to people almost all the time.

That series of photos was a wonderful Friday surprise!
Posted by KB at 7:39 PM