Shyla has reached the "insane puppy" phase of her recovery. She completely lost her mind this afternoon, trying to do zoomies in a circle around me while on a leash.

This morning, she was still able to hold herself together for brief periods. Just as the sun rose, I found a shaft of sunlight that highlighted one small spot in the forest, and I captured Shyla's beautiful face in it. 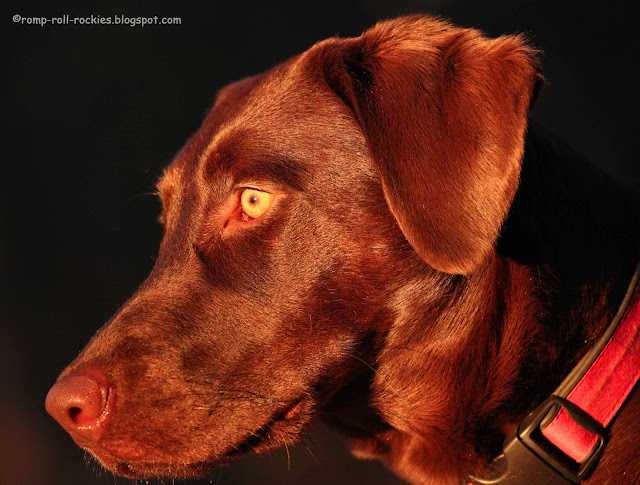 She quickly became bored of just sitting serenely, and she started "offering" tricks. That means that, without me asking, Shyla started running through her repertoire of tricks that I've taught her. When she arrived at "rest your head on something", I asked her to "stay" for a photo. 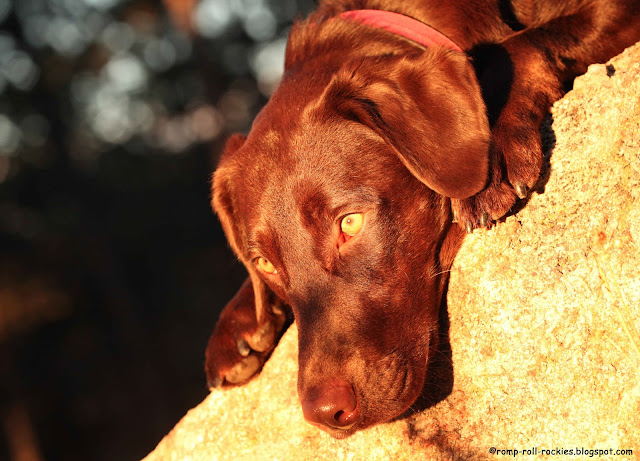 The enthusiasm for "working" that dogs learn is what I enjoy the most about the genre of training that we've undertaken. Shyla is never punished. Rather, she is rewarded for "good" behaviors. For that reason, she adores training. This training style is completely different from how I trained my first Labs, umpteen years ago. The old methods - dominance and punishment based - worked for some aspects of training but they didn't create the love of working and the bond that positive methods do. 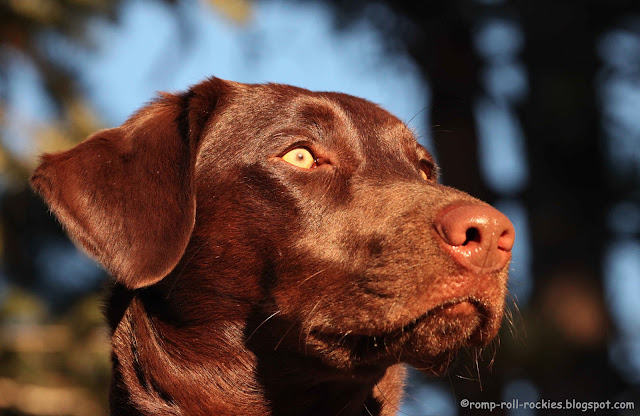 This was another example of how Shyla loves our training. We were simply sitting gazing over a meadow, when Shyla started waving at me, very insistently. I went with it... rewarding her and taking a photo. Her style of waving is funny because she almost always brings her paw directly in front of her nose! 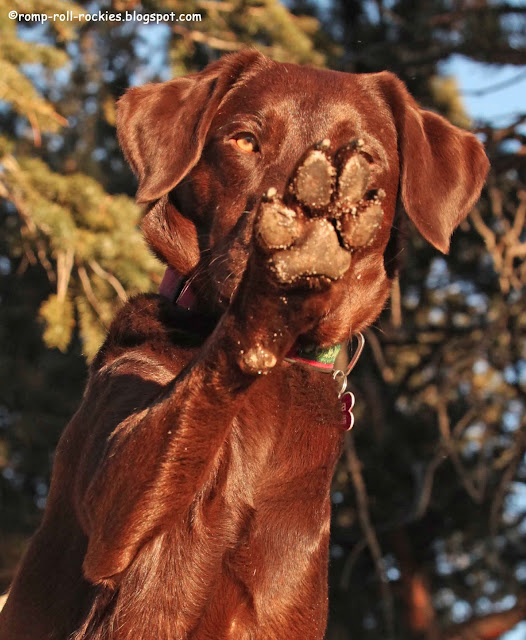 As we hiked toward home, I spotted a few lingering red leaves from last fall being lit up by the rising sun. They were the only splash of bright color in the forest. 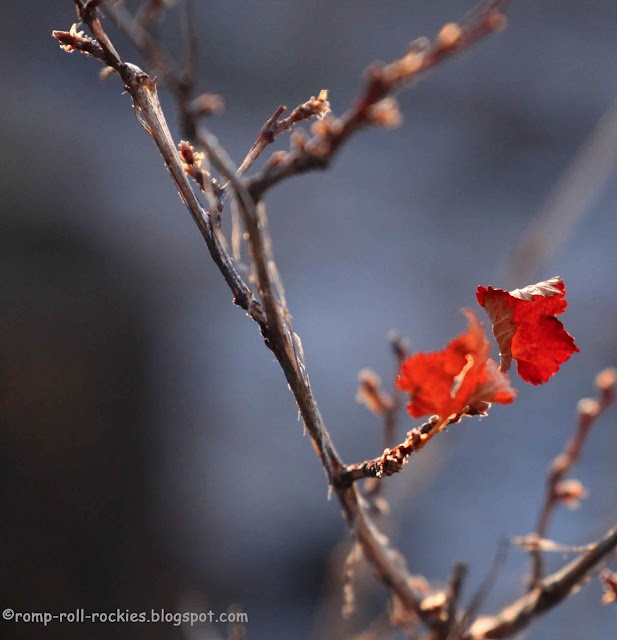 It snowed last night, a dusting that was gone by this afternoon but the delicate flakes captured my fancy this morning. 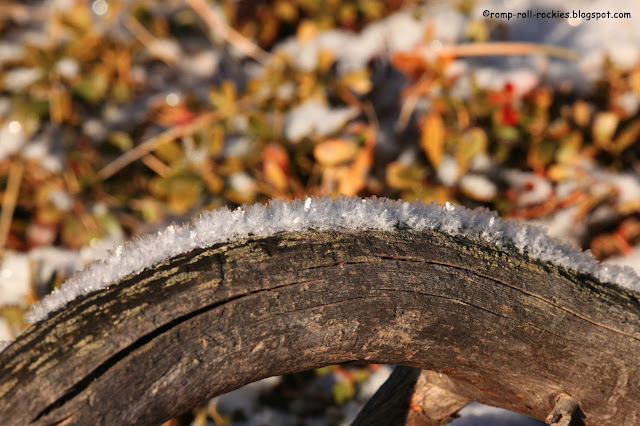 When we arrived home from our hike, I tried to engage Shyla's brain with some training but her excess energy made her unable to focus on anything! We'll try again this evening. Maybe she'll be sleepy enough to learn something.

Our snow from last night was great snow for tracking animals. Because each of our snowfalls has been so minor this year, I've had a lot of chances to track. Recently, I ran across big mountain lion tracks. They were very fresh and about 3.5" long. 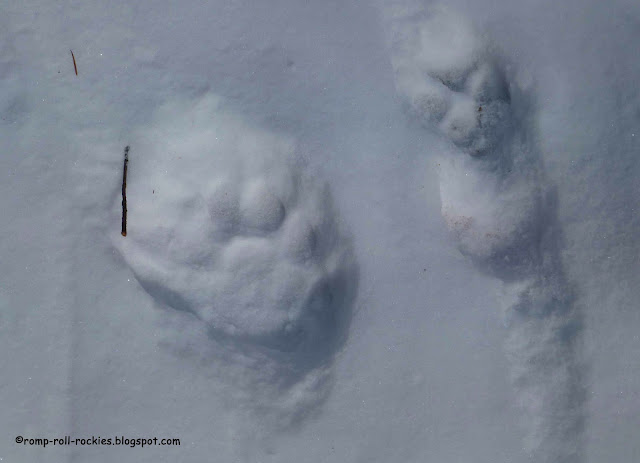 I followed the lion tracks for a little while. The lion walked through widely spaced trees by going from tree-to-tree. He'd walk up right behind one, then curve around it probably brushing his shoulder on the bark, and then walk to the next tree. In the photo below, he walked just to the left of the tree, curved behind it, and then you can barely see his tracks emerging to the right and behind the trunk. 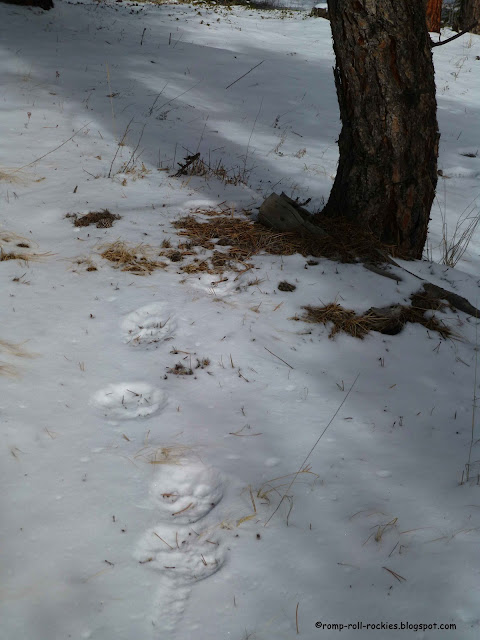 It's such fun finding tracks like these, and it gives me new ideas for trail camera locations! I hope that it snows more, for a million reasons, but one of them is that I love tracking.
Posted by KB at 6:27 PM