The Duo and Shyla

I love the days when I get the Duo together for our evening hike. 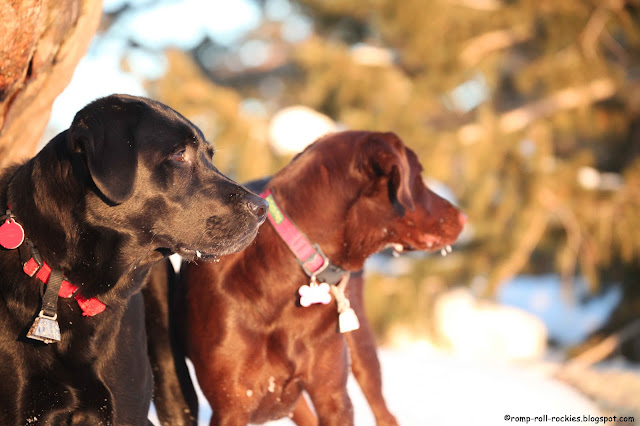 Shyla and R are fabulous friends. They play and play and play. However, as I mentioned before, sometimes Shyla is too rambunctious for R's taste. I've realized that all the dogs who R has lived with before have been very gentle during play, and he's been the rambunctious one. I'm not sure that he's ever met a dog who plays as wildly as Shyla.

He hasn't set ground rules about playing intensity for Shyla yet. So, I interrupt them, and have them doing a little obedience practice whenever R starts acting reticent about play. Interestingly, R did set the rules about a tennis ball that he was holding. When Shyla tried to take it from him, I heard a low rumble of a growl from R, and Shyla quickly retreated to the other side of the room, leaving R to enjoy his tennis ball. That tells me that R will set the rules about things that are important to him, and Shyla will follow them. 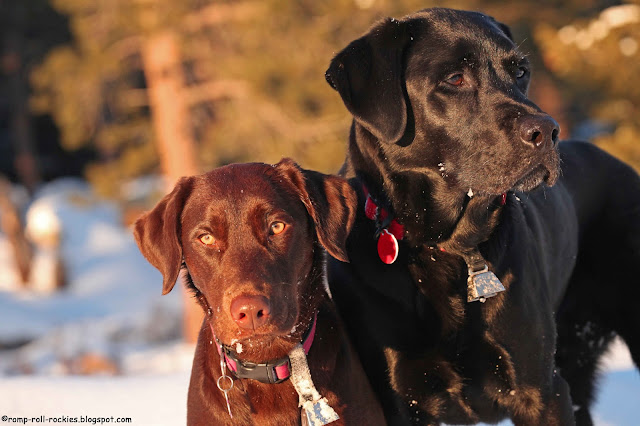 Shyla has become extraordinarily competitive about recalls when we practice them during our hikes. I always start the Duo in a sit-stay, and then I go a distance away to call them. Until recently, R won almost every recall race to me. Now, Shyla has become obsessed with getting to me first, and she's usually successful.

This was just after I'd called them. Shyla was a little faster out of the blocks. 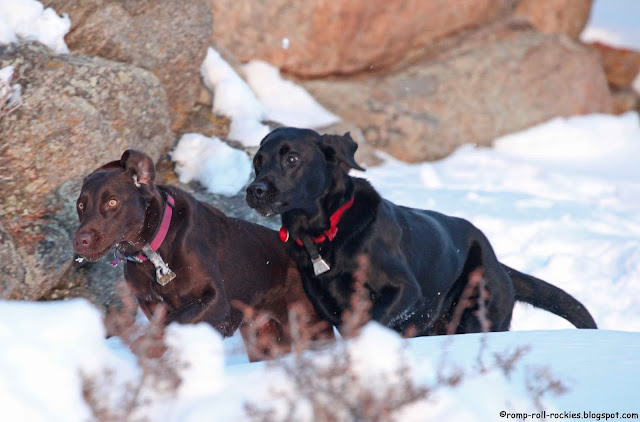 Shyla kept her lead, and looked kind of surprised about it! 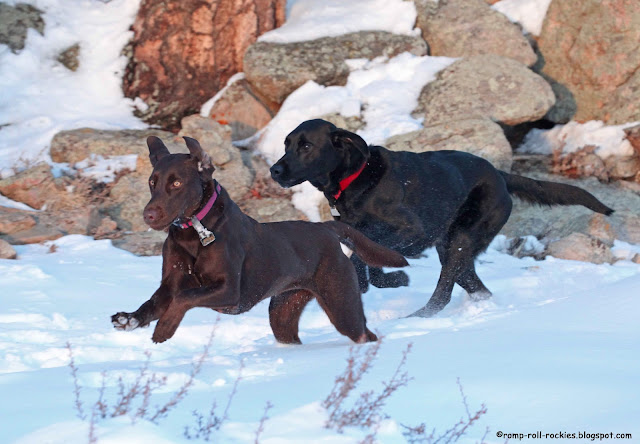 But then, R turned on the turbo chargers as they went around a curve to follow the packed trail to me. Both dogs are in this photo. R is directly behind Shyla. You can barely see his black paw. 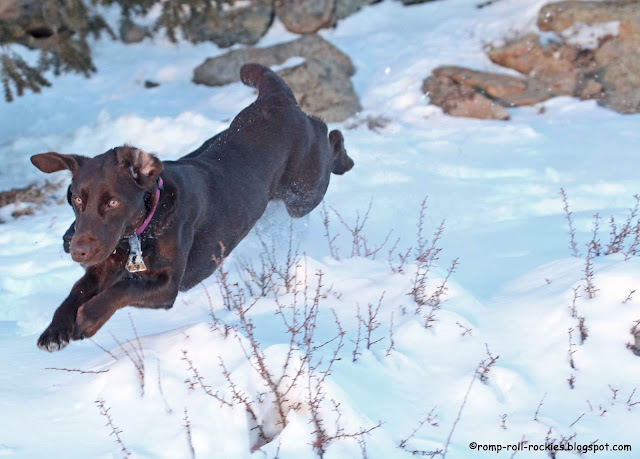 I'm not sure how this happened after they'd been neck-and-neck just a few strides earlier... but Shyla made it to me first. 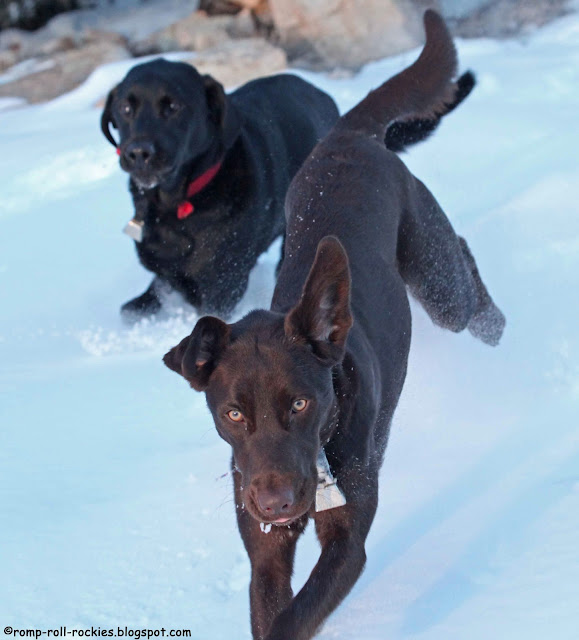 We think that the reason for Shyla's success is that she's young and naive. Today, I did a quick calculation that R has probably practiced at least 10,000 recalls in his life. So, it's not quite as exciting for him as it is for Shyla!

We will keep practicing recalls for our dogs' entire lifetimes. Because recalls are so important to their safety, the dogs always get an amazing jackpot of treats for a fast and enthusiastic recall. For other behaviors - like sit, stay, down, and other basics - we fade the treats with time. Both dogs only occasionally get rewarded with treats for those behaviors. But they always get praise! 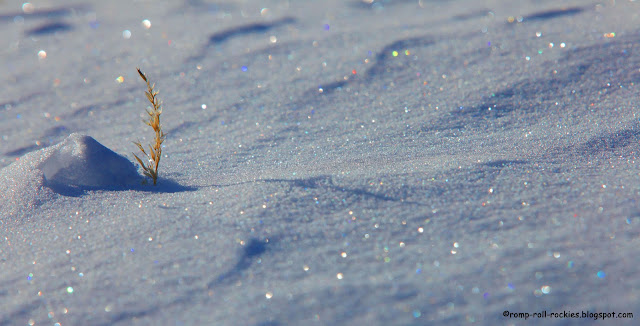 I want to lay out a few March training goals for Shyla. I want to teach her to cover her eyes with a paw, to rest her snout on my knee when I'm sitting, and to "shake" (as if she's getting water off of herself). I also plan to continue socialization training with 2-4 trips to new places each week. I won't make any specific goals for that part of Shyla's training. It's up to her how fast or slow it goes.

Our last two socialization training sessions have gone, for the most part, extremely well - after she had such a dramatic setback post-spaying a few weeks ago. I'm certain that there will be more backward steps in our future because that's how this process goes, according to people more experienced than me. But it doesn't matter in the big picture - I love this girl for who she is, no matter whether she acts fearful or outgoing. 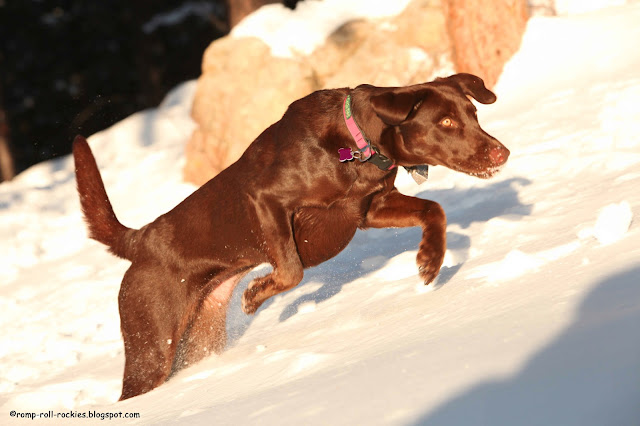 As I've thought about her, I've realized that simple things in life require tremendous courage from Shyla. Even on the days that I perceive that she's fearful, she has the courage to walk next to me through the crazy human world. I've started thinking of her as "Courageous Shyla", no matter how her training is going.
Posted by KB at 7:32 PM